Moving a telephone jack and wiring it

Our telephone jack in the kitchen is positioned for a wall mounted phone, and I want to move it to near the countertop where the home phone sits.

This is the wiring when I remove the cover. To me it's a lot of disconnected wires and the 5 connected that don't match any diagram I can find. (blue, red, green, blue/white and yellow)

Assuming the wire comes up to this jack and I can move the wire lower do I just copy the wiring here? Can I find a jack with 5 connections? I'm only familiar with 4 connections. 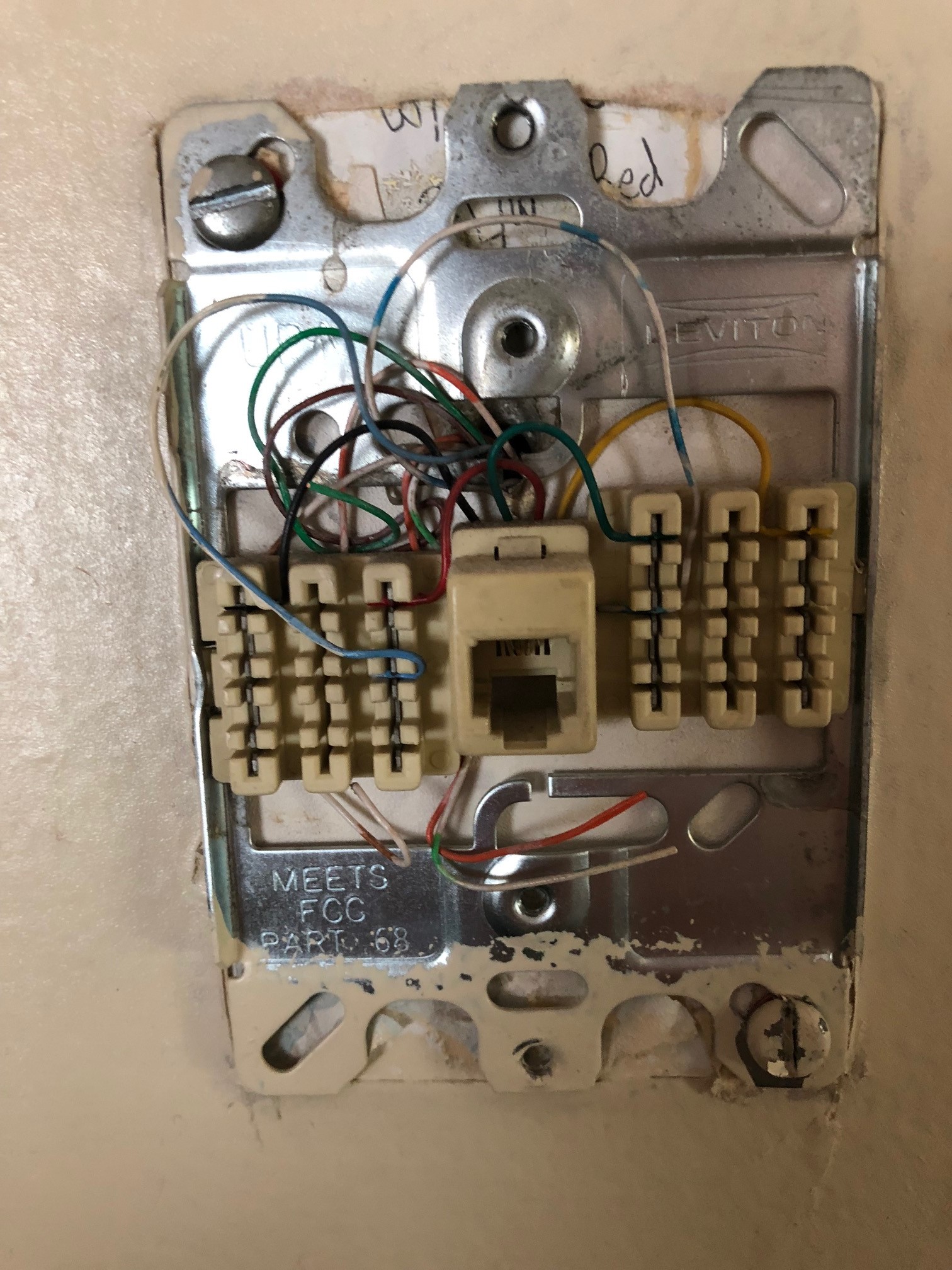 EDIT: I can trace the wire in the basement back to this junction of all the telephone wires that just dangles above the breaker box. The wire in question is the gray on on the top of the bundle. Maybe it's time I clean this up and install some kind of central hub where they all meet? (our house is being rewired which is what brought moving the jack on, before I repaint the wall after patching it. It's also why there's no cover on the breaker box right now.) 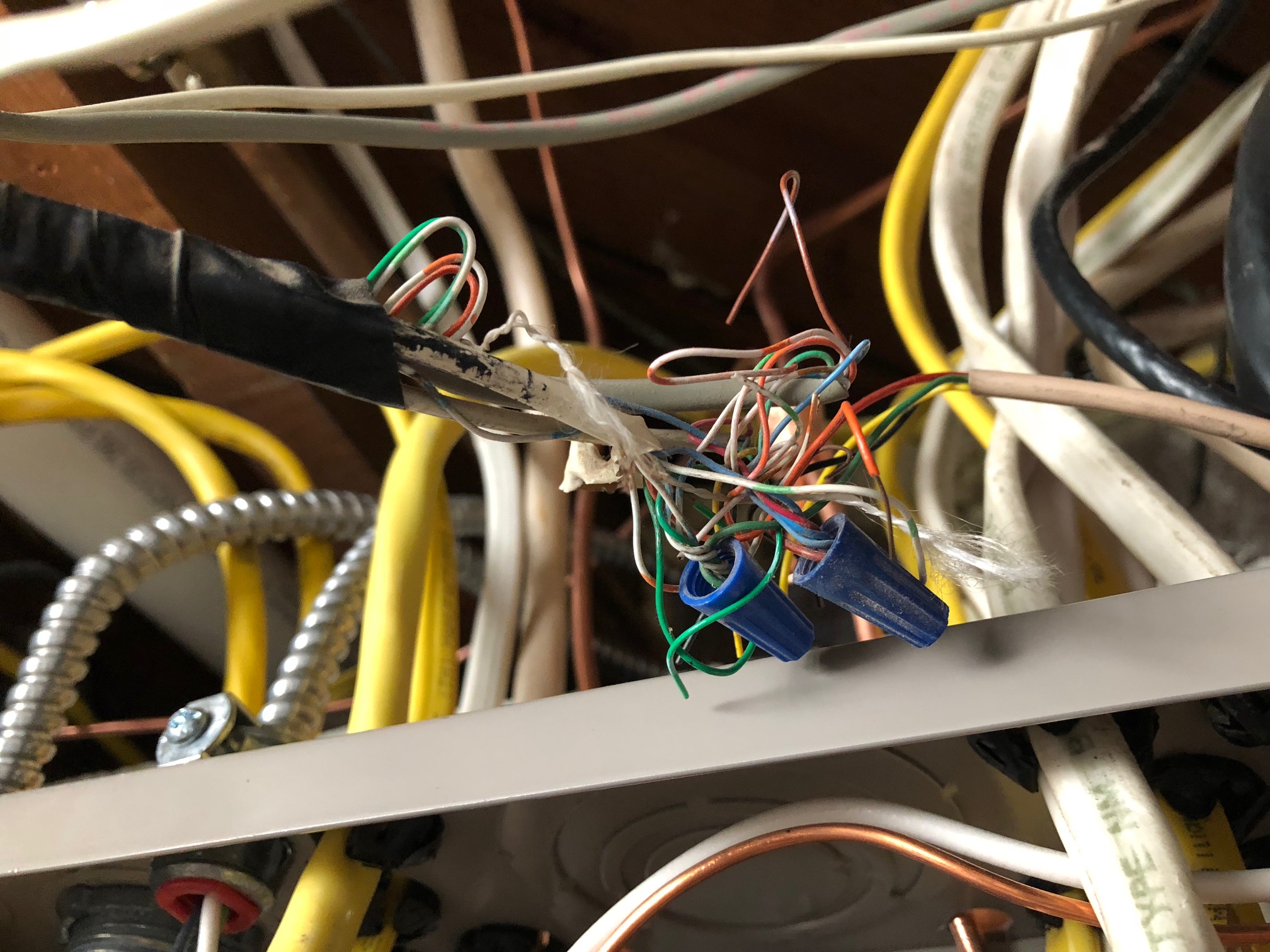 Key question is: How many phone lines do you have?

If you have one phone line then you only need 2 wires - one pair. This will normally be red & green on the jack and a colored pair of wires from the wall.

If you have two phone lines then you need 4 wires - two pairs. This will normally be red & green on the jack for one line, black & yellow on the jack for the second line and two colored pairs from the wall.

With normal phone service (POTS), you can have the wires in a pair reversed without a problem. However, you need to make sure the pairs themselves are not mixed up.

You can reuse the existing wall jack. But I highly recommend getting a new jack like Leviton 40249-W Standard Telephone Wall Jack, 6P4C, Screw Terminals, White. With a new jack that uses screw terminals you will not need any special tools to connect the wires - just strip the ends and screw in place. A wall jack will require either an electrical box or a box eliminator (a metal or plastic "frame" that is the same size height/width as a box but no depth - just cut a rectangle and stick it in) or use a Surface Mount Jack instead.

So all you really need to figure out is 1 line or 2 and which pairs of wires from the wall go to line 1 and (if you have 2 lines) line 2.

I am assuming your VOIP is some sort of magic box (e.g., Magicjack, Vonage, etc.) that lets you connect regular phones to a VOIP line. If that is not the case then none of this wiring makes sense. With one line (no matter how many phones) you only use 2 wires (red & green) of the standard 4-wire configuration. You just need to figure out (hard for me to tell from the picture) which pair of wires connects to the red & green on the inner part of the existing jack. That pair should be connected to red & green of a new jack, screw terminals recommended. (FYI, the existing jack needs a punch tool to do it right, which phone & network installers have but the average DIY does not).

Don't worry about the mess in the basement. If/when you fix it up, if you use the same cable to this location then you won't have to change anything on this end, just in the basement.

OP here, I figured it out. I assumed the red and green were matched with the wires attached on the same row. I rewired the new one using those two wires to the same colored and it worked. Thanks for the advice, it certainly helped!

5
How do I find out what's wrong with my phone (DSL) line?
5
Is it frequent to use two Ethernet cables for one phone line?
2
To which terminals do you connect a phone jack?
3
Inbound calls to one line cause other line to ring
0
Telephone line color code changes
1
For phone jack, which terminals are used by modem?
0
Telephone wiring question
0
Using a telephone wall-mount jack for an Ethernet-connected (VOIP) phone
3
Can anyone suggest how to connect a CAT6 cable to the incoming 5 pair telephone cable?
11
Wiring Ethernet through Telephone Cable