How to Pocket joist into double Wythe solid Brick wall?

I have a project in which I am relocating a staircase in a home I recently purchased. The engineer's drawings show the joists being pocketed into the walls. My original understanding was that you could cut an opening into the brick next to the existing beams, make fire cuts on the new LVL beams, wrap the ends with some type of moisture proofing wrap (like 55# felt?), then install the beams.

The engineer's drawings provide zero details on how the beams should be pocketed other than "3 inches minimum bearing". Also, when I had a contractor look a the project, they told me that it is illegal in Philadelphia to pocket beams and that a ledger needs to be used instead otherwise this project would fail inspection.

Some of my questions are:

1.) Why is it so illegal to pocket beams if the entire building top to bottom (built in the 1940's) consists of pocketed beams (probably not even fire cut to begin with)? Isn't it more sound from a structural standpoint to pocket?

2.) If a ledger needs to be used, how would you deal with the joists where the stairwell spans? Do the ALL the joists need to be cut and hung from one long ledger off the brick then using joist hangers as specified in the drawing on the stairwell ledger at the other end.

3.) How would YOU have this done if it was your house and why?

Here is the drawing provided by the engineer. : 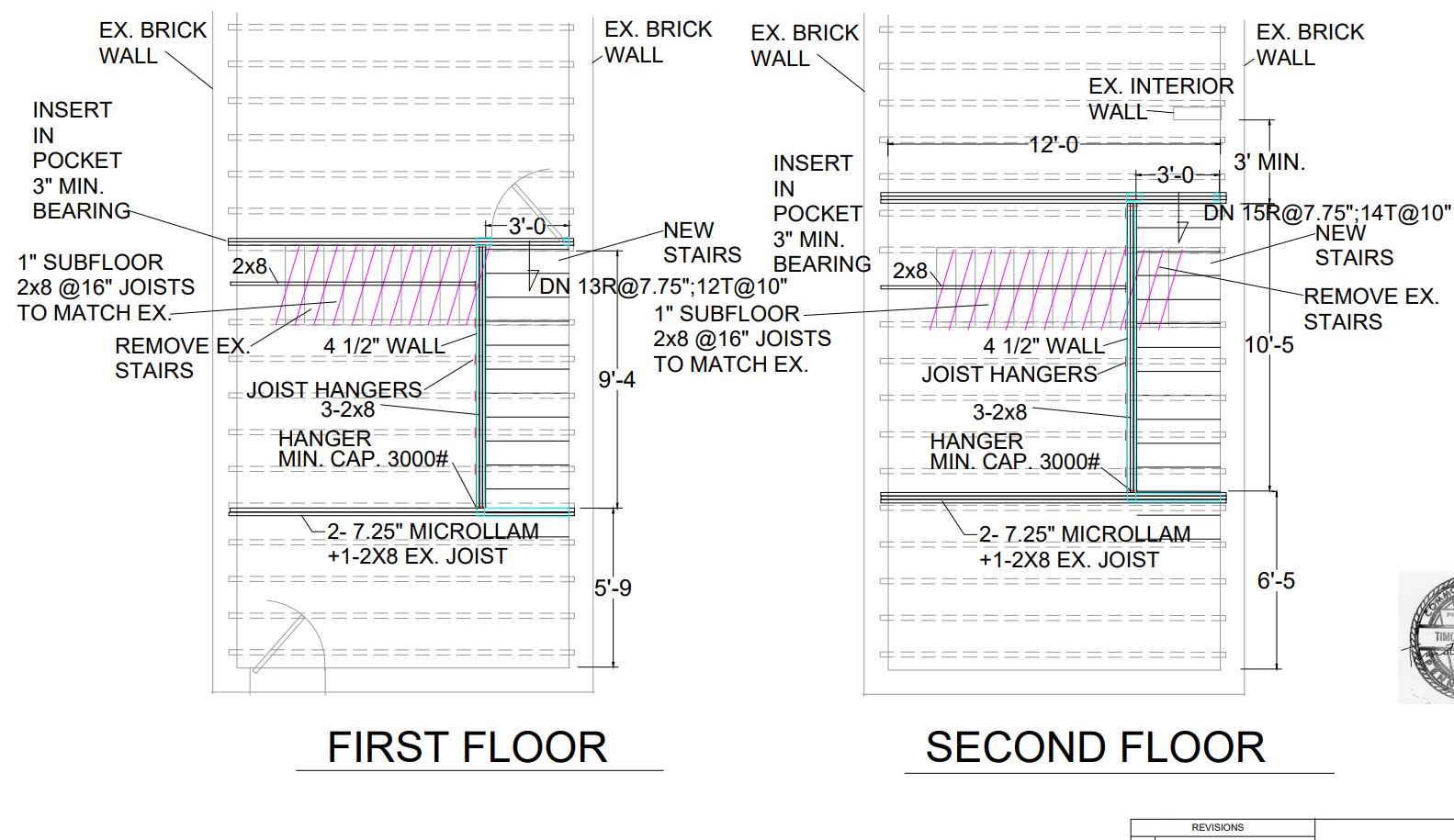 This was my original understanding of what should be done (based off the drawing) before I talked to the contractor:

Here are actual pictures from the basement: 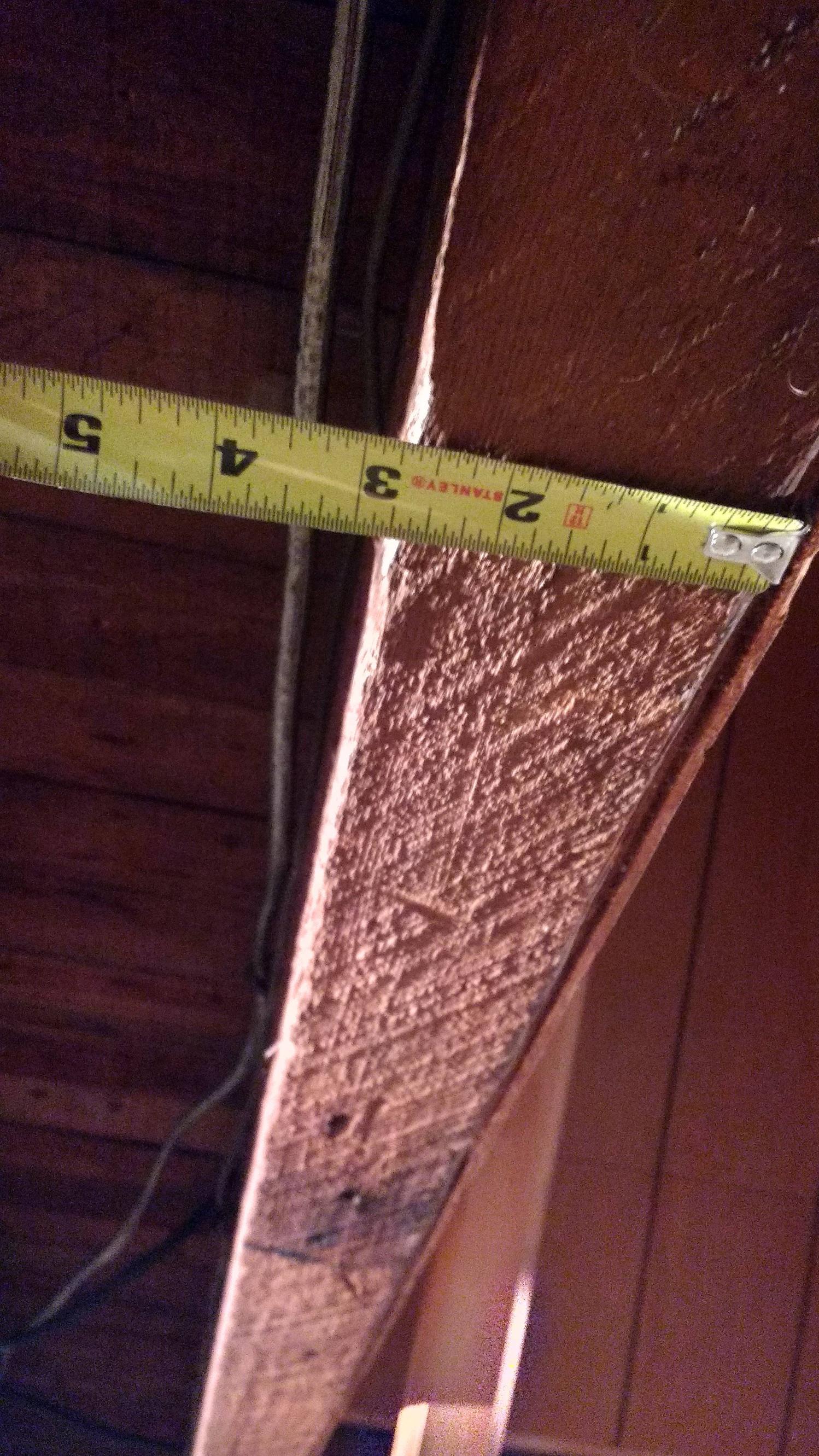 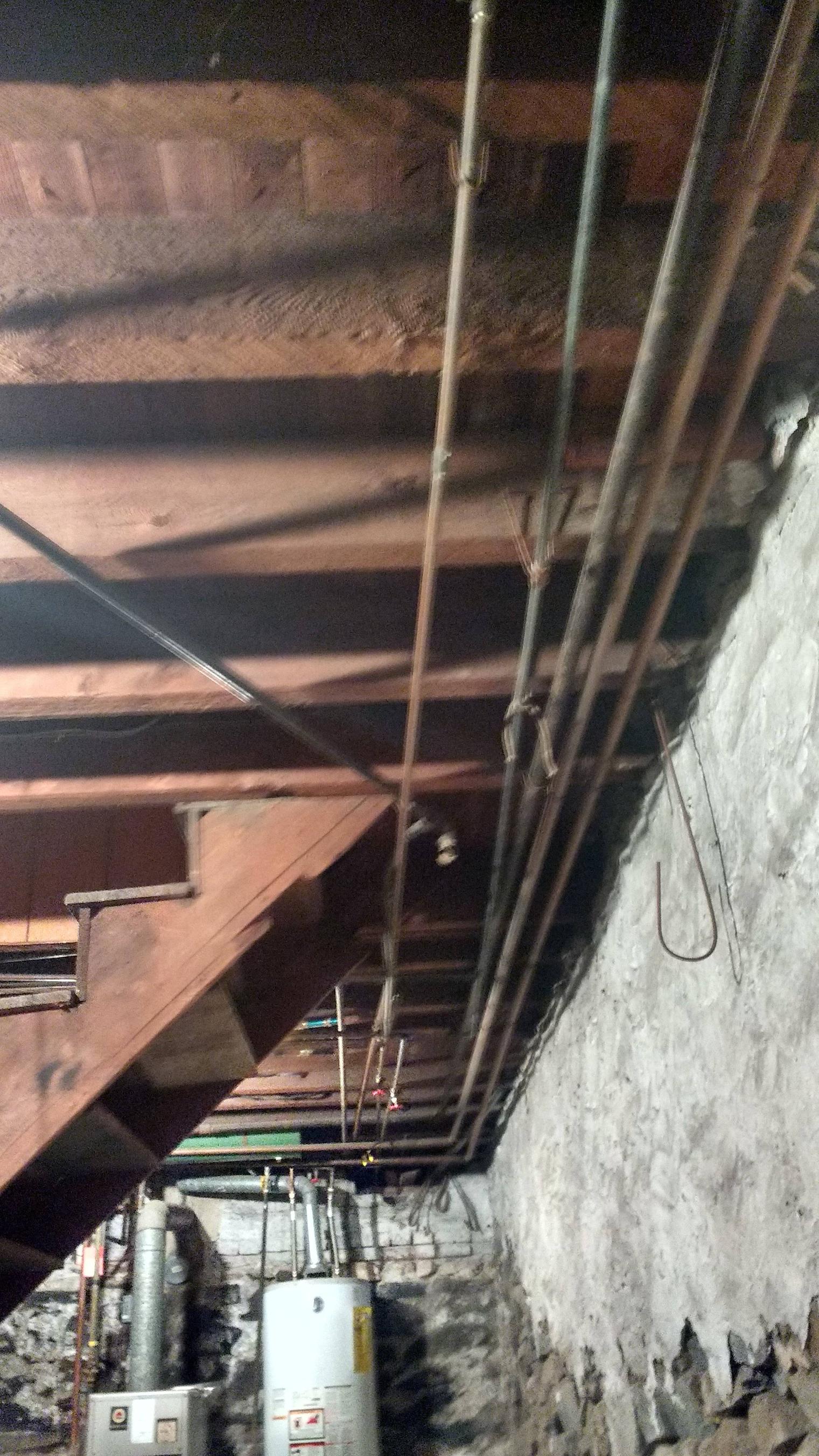 The new stairwell will be located along the party wall (to the right of the last picture) where all those pipes are seen which will be in the process of being relocated.

The reason the Code does not approve pocket installation of joists and beams is because it is difficult, if not impossible, to install hangers properly in pockets.

Joists, and especially beams, need to be supported for vertical loading and lateral loading. In order to do that, the joists and beams need to be fastened (nailed or bolted) into a steel hanger and the hanger needs to be secured to the building. Setting the hanger in a pocket does not allow nailing or bolting. (Actually, there are special hangers that extend far enough to allow nailing or bolting, but anchoring the hanger into the wall would be difficult.)

I don’t like anchoring beams into existing 1940 brick walls, because I don’t know how much, if any, reinforcing is in the wall. Rather, I like adding a post to support the beam and then bolting the post to the wall. (Posts under each joist isn’t reasonable, so I’d use a ledge to support the joists, but each joist needs a steel connector to fasten it to the ledger.)

Fire cut joists were used so that the joists would fall out of the pocket in the wall if there is a fire. Now, we reinforce the wall so it doesn’t fall if the joist is burned through.

There are common hangers that you can use between the joists and the beam by the stair. I’d ask your engineer to clarify the size and type he’d recommend.

You asked, how I would have designed the project? I don’t like “Point” connections. That is to say, I don’t like connectors connected into the existing brick wall because I can’t calculate the strength of the wall because the reinforcing is unknown. Rather, I’d build a wood frame wall with all the connections fastened to it in the work area. I’d cover the walls with plywood and then connect the wall to the exterior walls at many locations. The new walls would help hold the existing walls together and make the entire structure stronger.

6
How can I attach a ledger board to my house?
3
How should a new brick wall tie into an existing wall?
0
How to cut opening in double brick wall
1
How should I repair crumbling joist pockets in a brick wall?
3
When to re-set a brick in a wall?
1
Mounting heavy shelves to brick wall
0
mice and sound traveling through brick party wall joist pockets
1
Joist not sitting on brick wall
1
What is this plank above the Joist pocket for