How can flood water come in through a toilet?

Fredrick Maryland is experiencing severe flooding and one home owner has flood water gushing in the house through the toilet. You can view the video from the Facebook link above. What I don’t understand is how water can come backwards up the toilet? Aren’t there traps and other things that create suction or a seal? I’m not a plumber but I thought the pipes were designed to prevent something like this. 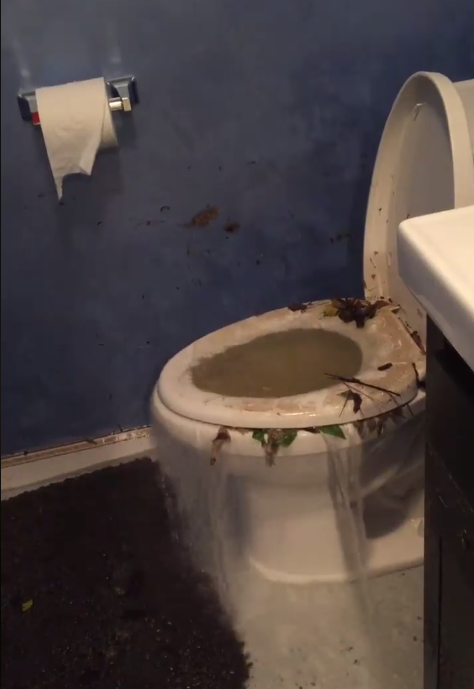 The trap on a toilet (or any plumbing fixture) prevents sewer gas from escaping. It's a very low-pressure thing, consisting solely of a small amount of standing water filling a low spot in the drain. Any force capable of moving a little water can overcome it, including air vacuum if it's not properly vented.

In the case of this flooding phenomenon, there must be a break in the city sewer line somewhere, and water standing above it. This obviously creates pressure that will escape at any point below its surface level.

It's worth mentioning that combined storm and sanitary sewers used to be very popular, and are still fairly common. In some cities they're still working to disconnect downspouts from the sewer system. They are out of favor now for obvious reasons, but not every city is has separate systems for storm water yet.

Happened in 2013 in our city. To many sewer and sanitation lines were mixed, broken etc. and 4-6 inches of rain in 90 minutes had 2 feet in most basements, all coming in through the plumbing.

Not the answer you're looking for? Browse other questions tagged toilet flooding or ask your own question.

8
Can vermin come in through your toilet or shower drain and, if so, what can you do about it?
0
What is causing the vibrations through my water pipes after flushing the toilet?
4
How do I prevent flood waters from entering my house?
1
How can I disconnect my water line from the toilet?
1
Toilet won't come off the flange
0
Can property changes be made to change flood zone determination?
1
We're in the middle of a(n epic) flood. Why won't my toilet flush?
1
How can I determine the source of a basement flood?
4
What are watertight storage solutions to protect objects from flood water?
3
Basement flooding from backwater valve pit groundwater... but why now?