The house I live in is 14 years old and is connected to the municipal water and sewage system in the Toronto, Canada, suburbs. I am on my second dishwasher. The first one was a cheapo Whirlpool, the current one is a mid-priced Miele. Nothing too fancy, but not cheap too. Both of them have the same issue: after it rains, or while it rains for a long time, the dishes and glasses/cups come out stinking of rancid fish.

None in the household was ever able to feel any odors from tap water. And we do not feel any odd smell from the sink drains or from the toilets. We never had sewage backup, knock on wood.

What was suggested to me:

I found a workaround with the new Miele dishwasher - if I stop the cycle right after the rinse is complete and before it begins to heat and circulate air out and into the drainage, the smell is either reduced to a minimum, or not there at all.

It also helped to add about 1 cup of white vinegar to the water once the cycle fills the pan. The smell was reduced, but not removed completely.

And finally, the smell was reduced significantly after installing the whole house filter from Vitasauls. The smell was horrible very often before that, and now it is noticeable only after it rained for a while.

I have a suspect, but that is inconclusive: the pleated drain hose of the dishwasher sounds like a perfect spot for breeding bacteria which arrives with the tap water, contaminated during the rain. But what can I do, if they all come with pleated plastic hoses?

I know that this is a very widespread problem with no one-size-fits-all resolution, but hoping for suggestion from anyone who experienced the same.

The picture below is very similar to my installation, both in the design of the sink drains, and the path of the drain hose to the stem on the drain pipe: 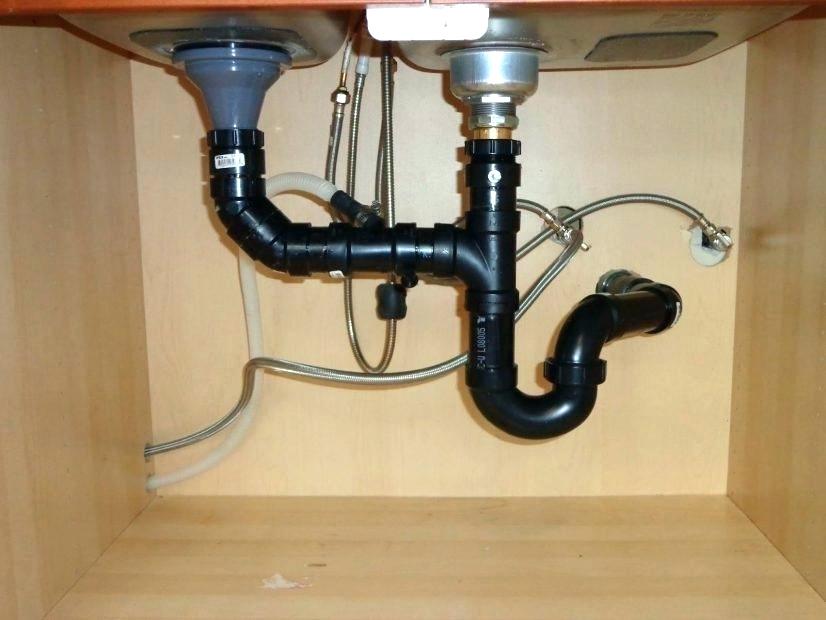 This sounds like a drain hose problem. If you can post a picture of the drain hose from where it leaves the dishwasher until it goes into the drain pipes (usually either into the pipes under the sink or into a disposal under the sink), that would be very helpful.

1 - If the drain hose goes into the drain pipes past the trap then that would likely violate code and would definitely explain the problem. The trap is there to prevent sewer gases from getting back into the house - or into the dishwasher. If that's the case, you need to either move the drain hose so it connects before the trap or add another trap (and then connect it before the trap).

2 - Dishwashers require an air gap. There are two forms.

The first ("traditional" in my mind) is a gadget on top of a corner of the sink. The drain hose goes up to this gadget and the water has to literally go through the air (an inch or so) to then flow back down into another drain hose into the pipes. I highly doubt you have this because any sewer gas would be coming out of the air gap either all the time or every time you run the dishwasher.

The second method is a high hose loop. The flexible hose from the dishwasher loops up so that the middle of the hose is right up underneath the counter before looping back down to go into the pipes or disposal. The key is that water can't back up from the pipes through the drain hose into the dishwasher unless water was backed up in the sink just as high - which would be quite unusual (and quite obvious at the time). There is effectively an air gap inside the hose.

If you have a hose loop that no longer loops - i.e., the hose either was never installed properly or has fallen down - so that the highest point on the hose is not much above where it connects to the pipes/disposal then you will have problems. If you have this problem, moving the hose may be all that you need to do - just use a loop of wire or something to hold the hose up in the right place. If your hose is not long enough - or if you are concerned that it is filled with dirt, etc. - you can replace it for ~ $10 (US).

Update based on picture. There appears to be a normal trap (good). But the drain hose does not have a traditional air gap and only goes a couple of inches above the pipes. The highest point is significantly below the bottom of the sink, so it will definitely not function correctly the way it is currently installed.

According to this page you may be experiencing backdraftng. Pressure imbalance between inside and outside can be at its worst during a rain event.

That may be strong enough to draw sewer gas past the p trap.

Typically, plumbing vents and exhaust systems will be improperly installed too closely to a door, soffit vent, window, or bathroom/kitchen vent. Making sure your ventilation and exhaust systems are free of debris and installed properly is critical in eliminating negative air pressure in your home. Especially when the reentry of sewer gases is significantly worse during rain, sewer, or storm drain flooding.

In addition the drain line in your cabinet should be routed through the cabinet as high up as you can get a hole drilled. That will insure that waste water from sink will not be able to back flow into the dishwasher drain line thanks to the “high loop”. 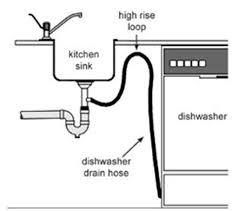 Not the answer you're looking for? Browse other questions tagged dishwasher smell sewer or ask your own question.