How to remove/replace the cartridge for this Delta Monitor shower faucet?

Can anyone identify this Delta shower faucet model?

I'm trying to replace the cartridge, but I'm having trouble getting the handle off. The hot/cold cap pops off and there is a Philips head screw, but that doesn't relate to the handle assembly.

There doesn't seem to be a set screw on the side of the assembly or anything like that. 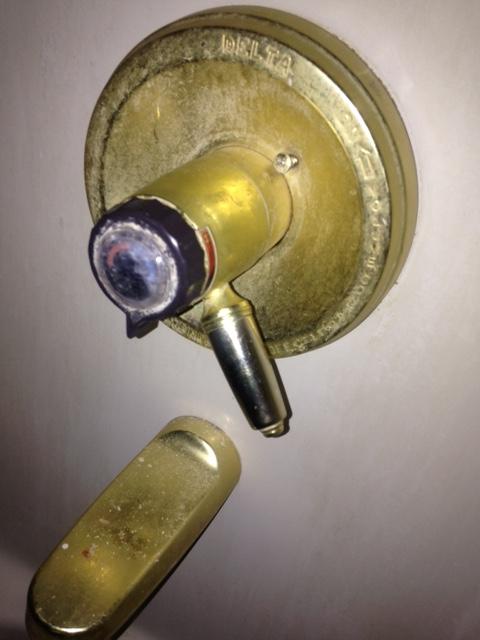 Well I discovered that the model i had was a Delta 1500 series Monitor faucet. Through internet searches I found a Delta conversion kit. It upgrades your 1500 series to the newer 1700 series. Part # RP29405. It comes with a cartridge, new springs and gaskets, bonnet nut, sleeve, shower head w/chrome neck, and complete 1700 series handle assembly. Everything is chrome. It turns out that the 1500 series uses the universal valve so the 1700 series cartridge fits in it.

A couple of tips to using the conversion kit. First it comes with 2 sets of gaskets that sit in the back of the valve housing. Use the thicker ones. I used the skinnier ones because they were the same size as the old ones I removed, but it still leaked after I screwed the bonnet nut on. I finally tried the thicker gasket (the thicker ones are connected to each other) and it sealed it right up. I believe the 1700 series cartridge is slightly shorter than the old 1500 cartridge and thus why the thicker gasket was needed. Second tip is the new shower head might not fit on your old neck. Mine didn't and I wasn't in the mood to change that out just yet, so I have chrome handle and back plate with the brass/gold shower head and tub spout. I have both pieces, but I'll save that for another day. Right now the shower is back to working with full pressure hot and cold. Now I just need to replace the water heater elements and I'm back.

If you have a 1500 series faucet and want to upgrade to the 1700 series. All you really need is a 1700 series cartridge and a 1700 series handle assembly. If you can find the handle assembly separate locally or on CL or something you can make the conversion much cheaper possibly. I ordered the conversion kit from Amazon + the chrome tub spout with pull down shower activator for $128 shipped, 2 day Amazon prime. Not too bad. Hope this helps someone down the road.

Sorry for the lack of pictures. I was fighting this thing in low light and no help. The instructions that came with the kit didn't help much.

but that doesn't relate to the handle assembly.

What makes you think that ?

As you stated, On the front of the handle is plastic cover with the red and blue indicators, you should be able to pry it off with a thin screw driver or something similar.

That should give you access to the screw that holds the handle on.

If that is the case then place a cloth over the drain opening ( so you do not drop the screw down the drain ) and remove the cover and then the screw holding the handle on, the handle should put straight off. It may be a little tight so wiggling it back and forth while pulling may be required.

Not the answer you're looking for? Browse other questions tagged plumbing shower faucet cartridge or ask your own question.