Is it possible to make space for a double-pole breaker in this panel?

I need to add a 90A double-pole breaker to the service panel on my house to feed a subpanel in a detached garage. It is a GE that uses Q-line breakers. Looking at the current layout, I'm not sure it can be done. I've had a few electricians say it is possible to make room, whereas others have indicated a subpanel is needed next to this one. 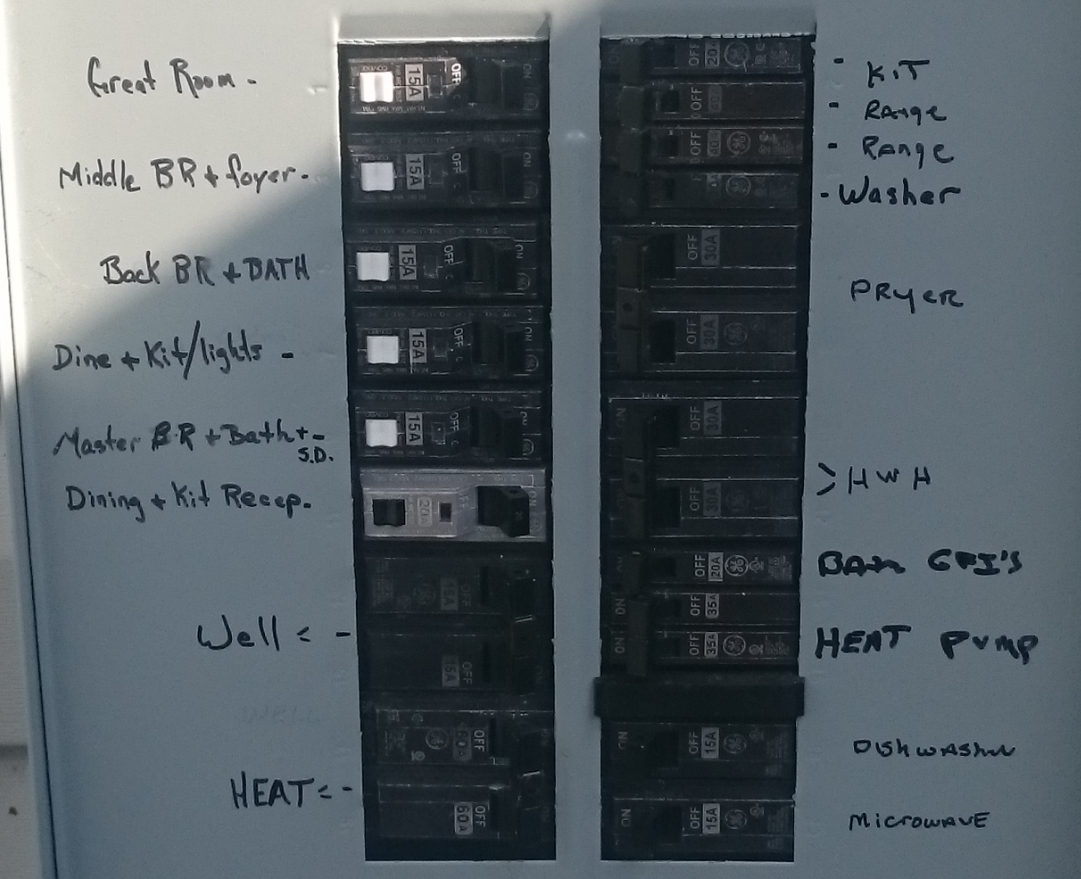 It looks like there is a half-space available under the heat pump breakers. I was considering replacing the dishwasher and microwave breakers with a 15A tandem breaker, but this would only free up 1.5 slots total. The full size breakers in the upper left portion are AFCI. I don't think I can replace these with tandem breakers and still remain in code even if I replace the receptacles with the AFCI type.

Is there any way to accomplish this without needing to add a subpanel?

circuit-breaker electrical-panel subpanel
Share
Improve this question
asked May 17 '18 at 19:12

Getting this panel up to current Code

While Harper's solution gets you the free slots you need right now, your AHJ may insist that this panel be brought up to the current Code (at the moment, 2014) in your jurisdiction since you're touching it -- provided you are installed/inspected before the adoption date of the 2017 NEC in your jurisdiction, the 2014 NEC will apply.

What this means for you is that several of your breakers will have to be shuffled around, as the kitchen and laundry (washer) need AFCI protection now under the 2014 NEC. In particular, instead of what Harper suggests:

The 2017 NEC extended AFCI protection to all dwelling unit outlets -- for you, this means that beyond the kitchen outlets (countertop/SABC, microwave, dishwasher) and the laundry circuit requiring AFCI protection, the bathroom receptacles circuit also requires AFCI protection, which stretches your panel just past the limits if your AHJ insists that the panel be brought up to the 2017 NEC standards.

What I'd do in this case is get a decent sized NEMA 3R main lug subpanel with a ground bar -- a TLM2412RCU with a TGK24 ground bar will do if you want to stay in GE Q-line, although I prefer Siemens or Eaton BR instead -- and remove the existing bathroom breaker, replace the existing heat pump breaker with two THQP135s handle tied with yet another THT2 (presuming that the heat pump is a 240V-only load, as most are) in the slots around the current heat pump breaker, re-use the now-former heat pump breaker for the feeder to the subpanel, and then feed the subpanel with some #8 THHNs (hot/hot/neutral) in a fat metal conduit (such as 2").

The existing bathroom homerun then gets rerouted (it can pass through the existing panel to reach the new subpanel, as 312.8 permits splicing in electrical panels) to a 20A 1-pole AFCI that matches the panel's type (THQL1120AF2 if you went GE for the sub) in the new subpanel.

The third and final option would be to fatten up the feeder breaker Harper suggests somewhat, probably to 125A, and then install a subpanel next to your existing panel, fed off that 125A breaker, with a 90A breaker in the subpanel that feeds the garage. Again, running the feeder between the two house panels in fat conduit is a wise idea, and you're again not restricted to GE for the subpanel here. This would then let you move some of the house circuits into the new subpanel, where they'd have enough room for full-sized breakers.

Not the answer you're looking for? Browse other questions tagged circuit-breaker electrical-panel subpanel or ask your own question.

5
What are my options to repair a broken tab on a bus bar?
1
Loads for sub panels from 150A split-bus main panel
3
I need to add a subpanel for my electric car, need to know wire gauge/breaker for main
4
What are good uses for tandem (double-stuff) breakers?
3
Was it ever acceptable in the past to use 20A breakers with 14 AWG wire?
1
capacity of my electric panel
0
15 Amp outlet on 20 AMP circuit?
3
adding new circuit to generator subpanel without a ground bar
3
Can I replace a quad breaker with a tandem breaker?
0
Seeking advice on how to rearrange existing breakers and add 2 circuits, including a 20A GFCI/AFCI breaker in a split-buss GE panel