I have two adjacent light switches sharing a box. Live black wire comes from house control panel to the box. Then, presumably, each of the other two wire inputs into the box go one each to an interior light and an exterior light. 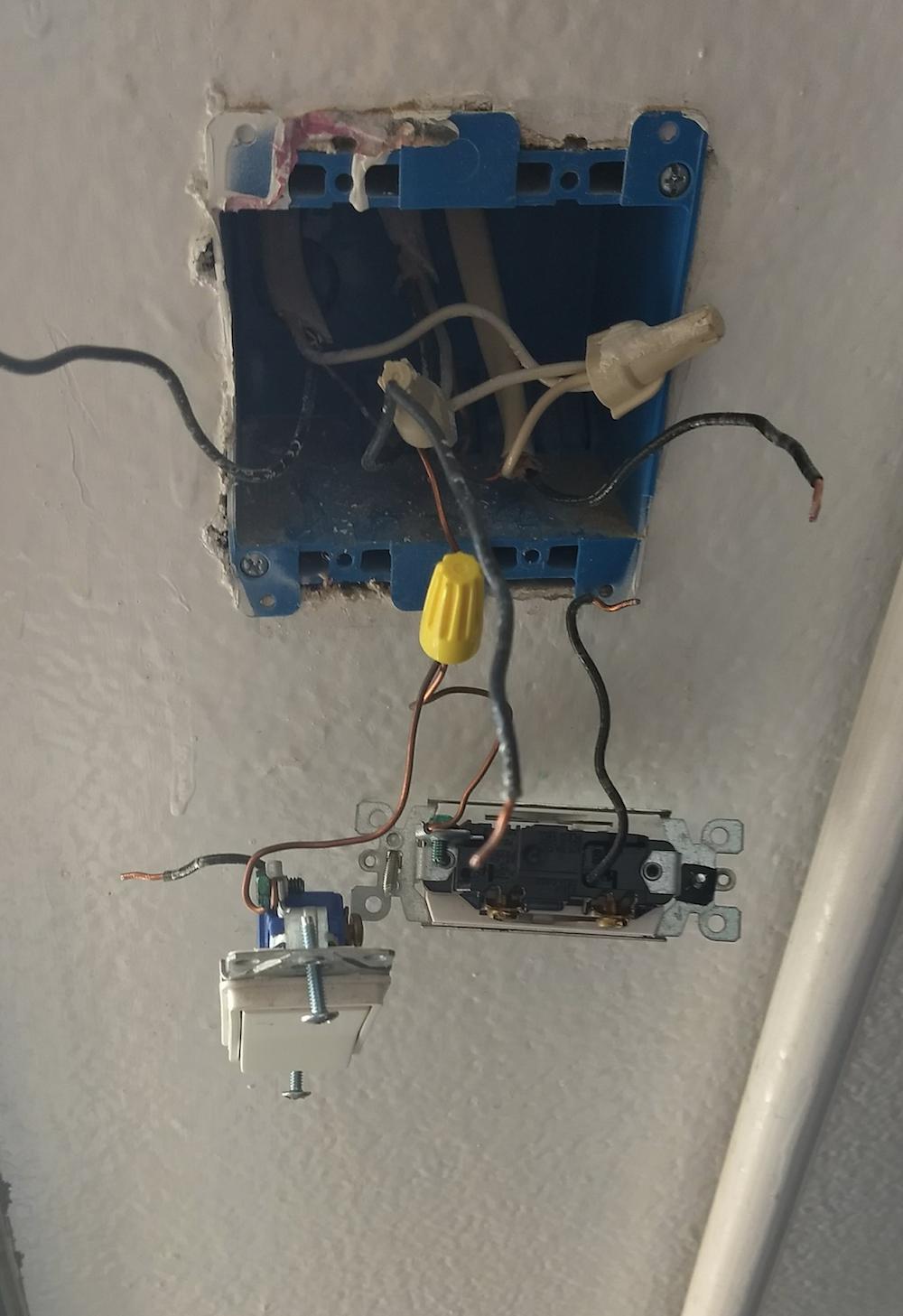 The problem is that when I connect only one of these "dead" blacks to the live black from the control panel, the third black then also has power; however, neither light comes on and the two switches are not operating independently. I have not modified the wiring in any way since the house was built. Any suggestions as to why it may have been wired in this way AND how to fix this (short of rewiring)? Thank you!

Start by looking at your technique

What I see in the photo is a lot of wires in a slight spiral with the ends nibbled a bit from having been in a wire nut. I also see all the screws snug, which tells me you are using the backstab holes. A few things about backstabs:

The best play (generally) is Stop using backstabs altogether and doing so might solve the problem right there. Switch to the screw terminals, form a J-hook on the wire and hook it over the screw terminal (clockwise so tightening the screw tightens the J-hook, that's not Code, just works better, you'll see). The screw will flatten out prior bends and wire-nut serrations because it has a large area and a lot of clamping force.

I'd also undo the white wirenut and inspect the wires. Make sure they have enough copper exposed for an effective wire-nut splice. Ideally follow the instructions that come with the wire nut, but I aim for a strip length of about 75% of nut length. It will "suck in" as you tighten the wire nut, and be firm with that. Also inspect the white wires closely for any broken wires, as that would cause your symptom.

Lights not working and energizing either trailing hot lighting up both hots, that has "lost neutral" written all over it. Neutral current is unable to return to the panel, and that means the neutrals are also "going hot" (via the bulb filament). That's carrying hot over to the other lamp's neutral, through its bulb filament and back to the other hot.

It's also possible you are just seeing capacitive coupling from the cables running parallel for a stretch. This capacitive connection isn't capable of providing any useful current, so it cannot light a neon-light tester or move the physical needle on a traditional analog voltmeter. However DVMs and powered hot detectors will detect it, which can make you crazy.

If it remains a mystery, you might also try hooking only one lamp's hot and neutral direct to supply hot and neutral - when you turn the breaker back on, that lamp should light - and then check other wires for signs of life. If you are seeing capacitive coupling (or parallel induction), then the other lamp's hot and neutral will both show voltage, since both are disconnected, yet connected to each other via the lamp filament.