To be able to handle live loads, we recently reinforced the 2x6 joists in our attic by sistering them with 2x8s. To achieve level, the 2x8s are not flush with the 2x6s on the bottom; they range anywhere from 1/2 inch to 1 1/2 inch higher.

Here's a cross-sectional view of the worst case scenario: 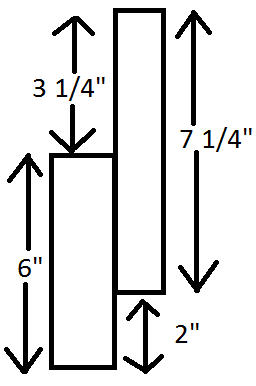 So the question is: How far down from the top of the 2x8 should I drill a 1" hole?

The rules for notching and boring joists allow you to 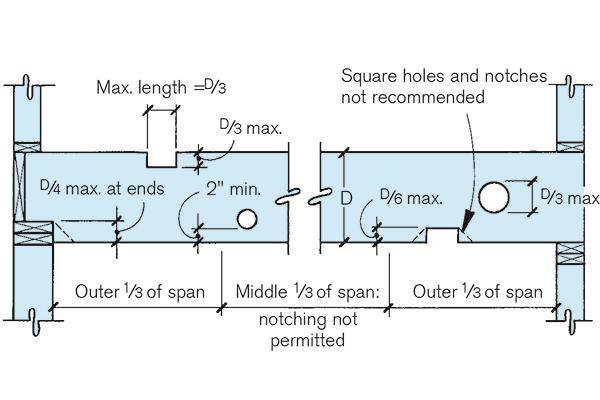 The question and comments seem to say there is as little as 4" of overlap between the sistered joists, making it impossible to make bored holes that are 2" away from the top and bottom edges of both joists.

However if a bored hole is less than the 1/6 max height for a notch, it stands to reason the bored hole can be in that 2" zone; certainly a bored hole removes less wood than a notch.

Therefore, as long as you

you satisfy the rules and run your wires without significantly weakening the joists. I'd aim for the approximate center of the overlap if possible, that should be the strongest spot to drill through.

If the two joists are secured (nailed) together and the tops and bottoms are not aligned, then you’ve moved the neutral axis from the center of the beams.

Also, I’d avoid the middle third of the span.

I’d look along the line of drilling and make sure none of the holes will be located next to a large knothole. If so, I’d move the hole a few inches.

BTW, if the joists are not secured together, none of my answer matters.

putting holes near the edge of a beam weakens it much more than holes in the middle, notches are even worse.

unless the bond between the two beams meets the definition of lamination (ie: the bond is as strong as the wood) holes near the edge of either beam must be avoided

Drill the holes as close to the center of the 2x8 as you can get without damaging the 2x6 (your maximum allowed size is 1-1/4 diameter). a scuff mark does not count a damage so where convenient I would start with my drill bit resting on the 2x6

Not the answer you're looking for? Browse other questions tagged hole or ask your own question.

6
Do the guidelines for holes in joists apply to band joists?
4
How to reinstall iron stair railing in concrete that rusted out at the base?
4
Fixing an offset pilot hole in steel?
1
How deep do I cement a 21' tall, schedule 40 galvanized steel pole?
1
How to safely dig a 12 inch diameter hole with an 8 inch auger
2
What are guidelines for drilling into a top plate?
0
How to choose hole sizes when building a sorting sieve?
0
safe distance for re-drilling nail holes
3
Is it OK to drill one or two 2 inch holes into a load bearing header in my basement?