Multi gang switch boxes - Is it okay to keep the same branch neutrals separated for the different lighting/switching circuits?

I recently learned from this community about the importance of keeping currents balanced in each cable. In other words, current in one direction should be canceled by the same amount of current flowing in the opposite direction in the same cable in order to reduce inductive heating and (possibly to cut down on unwanted rf interference). I think it is a useful rule for thinking through switching-circuits, but I just wanted to run my scenario by all of you to see if you agree with my conclusions. My question is, should the neutral conductors from the same branch circuit always be tied together in each box, or is it better to do it the way I show in the following situations? 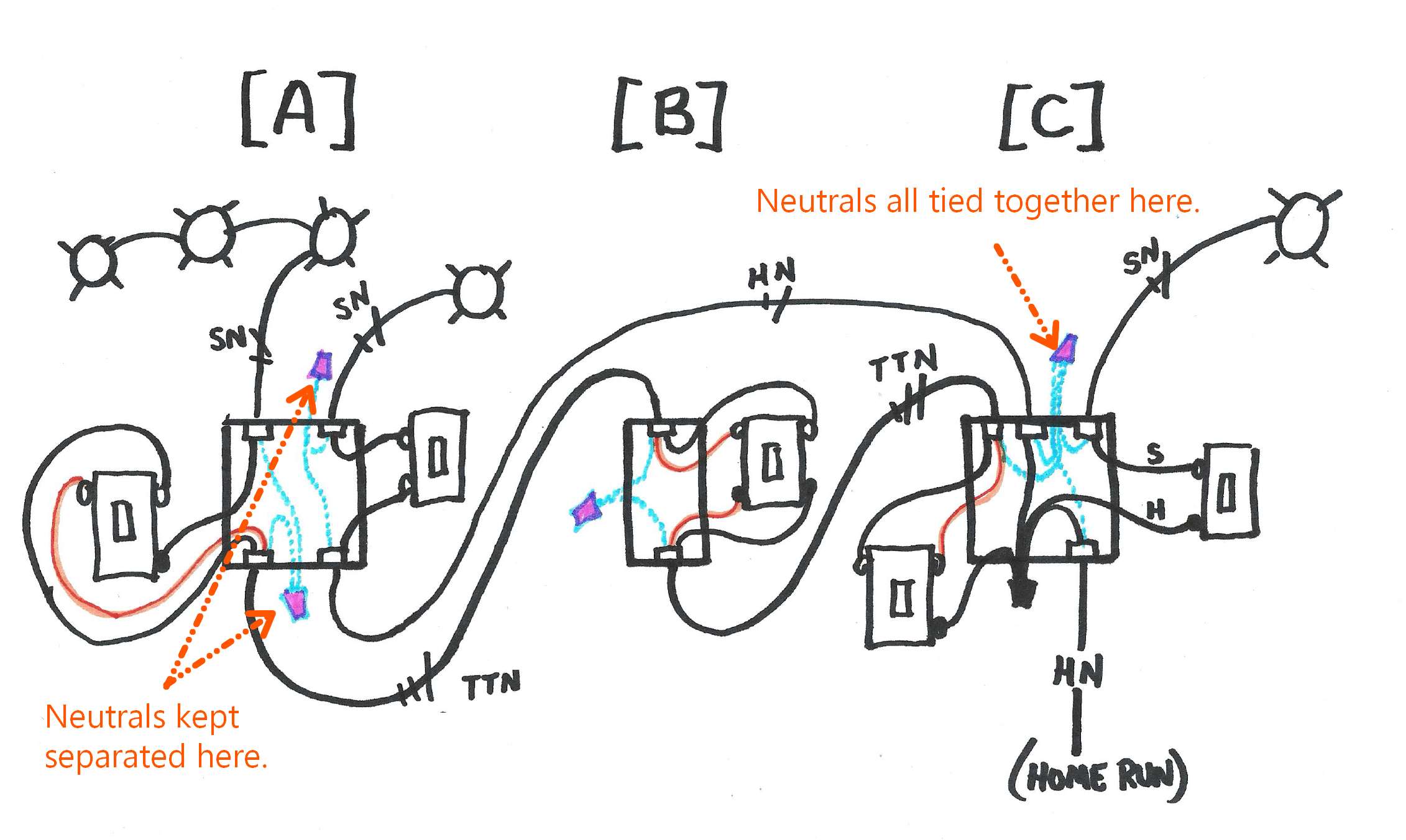 The traveler terminal screws of the three-way switch at [C] are connected to the black and red wires of a 3-wire cable running to a four-way switch box [B]. The white neutral wires (N) all tie together in this box because they’ll each have to have the return path back through the Homerun neutral here. So the 3-wire cable carries two travelers and a neutral (TTN).

In box A the HN 2-wire supplies a single pole switch to control the laundry room light. The black wire hits one terminal of the switch, while the other terminal is connected to the black wire of a second 2-wire (SN) running to the light. These two white (N) wires tie together in this box, but in keeping with the balanced current rule, I’ve kept them separate from others.

Questions I have about this arrangement are:

Nice drawing. Very clear and looks correct. It would be a mistake to tie the two neutral wires in box A. This would create a circuit loop and a fire risk from heating when one circuit is on and the other is off. There may also be hum if you use switches or lights that include electronic circuits such as fluorescent ballasts. It's OK to wire this up as drawn.

Green/bare grounding wires should be treated in the same way. If there are two separate grounding conductors feeding box A (e.g., NM cable) then they should be tied separately as drawn for the two neutrals. If you feed box A with two grounding wires it is best not to use a metal junction box. If junction box A is metal it needs to be bonded to one of these grounding wires and will thereby be bonded to both switches. In that case you can't avoid a ground loop. This would not be a safety hazard as these wire carry no continuous current but it may cause hum as noted above. So use a non-metal box and run NM cable or individual wires in NM conduit.

Better yet, remove the standalone A-to-C run by running HTTN(G) from box A to B as well as from box B to C. Then there are no neutral or ground loops to worry about and you are free to choose the most convenient wiring method.

Correct. Once the neutrals go their separate ways, they must not reunite, because that would form a loop, giving neutral current two potential paths. That would imbalance currents in each cable, and cause eddy current heating, cable vibration (and soon, damage) and all sorts of mischief.

Electrical is a tree diagram.

Another way to visualize that is if you drew the diagram out, with all non-grounds, but without boxes -- and used the "paint pot" tool on the corner -- the paint should fill everywhere. Wires on a diagram should not enclose an area, except within their own cable.

1
Can I splice the common wire of two different circuits in the same junction?

1
Wiring the Auxiliary switch on a 3-way switch
1
How do I convert from 3-way switches to dimmers?
1
3 way switch with multiple outlets
0
Bypass a three-way switch for the next single pole switch in the same circuit to work on a different light?
3
Replacing Bath Fan Switch with Timer Switch
2
How can I get this light fixture to light up?
2
Help figuring out this three-way switch
3
Should my smart switch be connected to the neutral wire from another cable?