Could stove element be powered through fan switch? 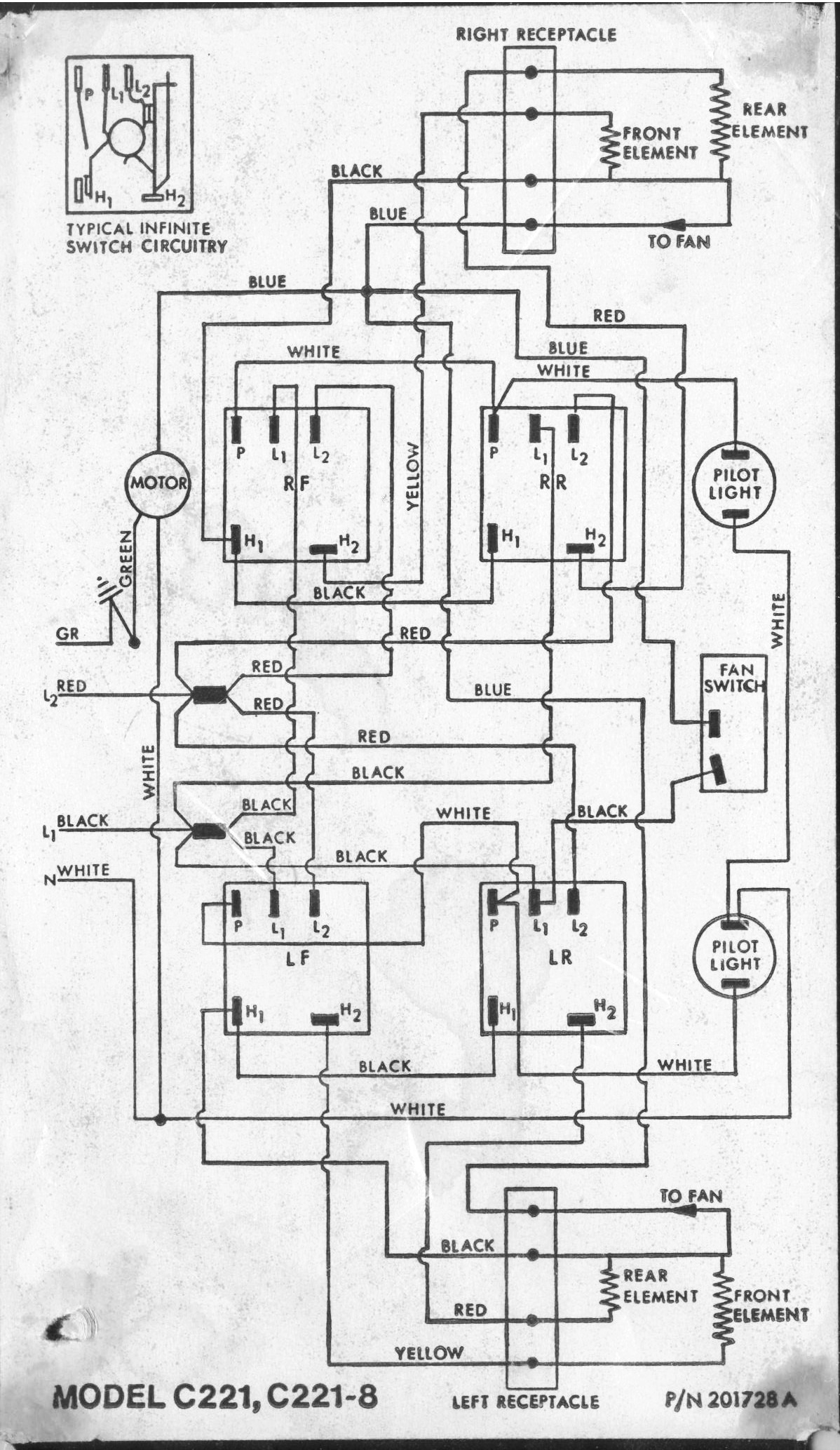 By design, the downdraft fan turns on whenever a grill element is installed and turned on. This is done using an extra spade contact present on the grill element (but not the burner cartridge) which is shunted to one of the other contacts used for powering the element. So if the fan switch is off, the fan will be powered from terminal H1 of the grill element switch via the shunted receptacle contacts.

Now imagine the following scenario, starting with all elements switched off:

Would this effectively cause the grill element to be powered through the fan switch?

EDIT: here is an annotated wiring diagram for when a grill is installed in the right bay, and the front element is turned on. The red path is where I suspect current would flow, and the red 'X' indicates that no current can flow through its normal path out the black wire from the receptacle due to a fault. 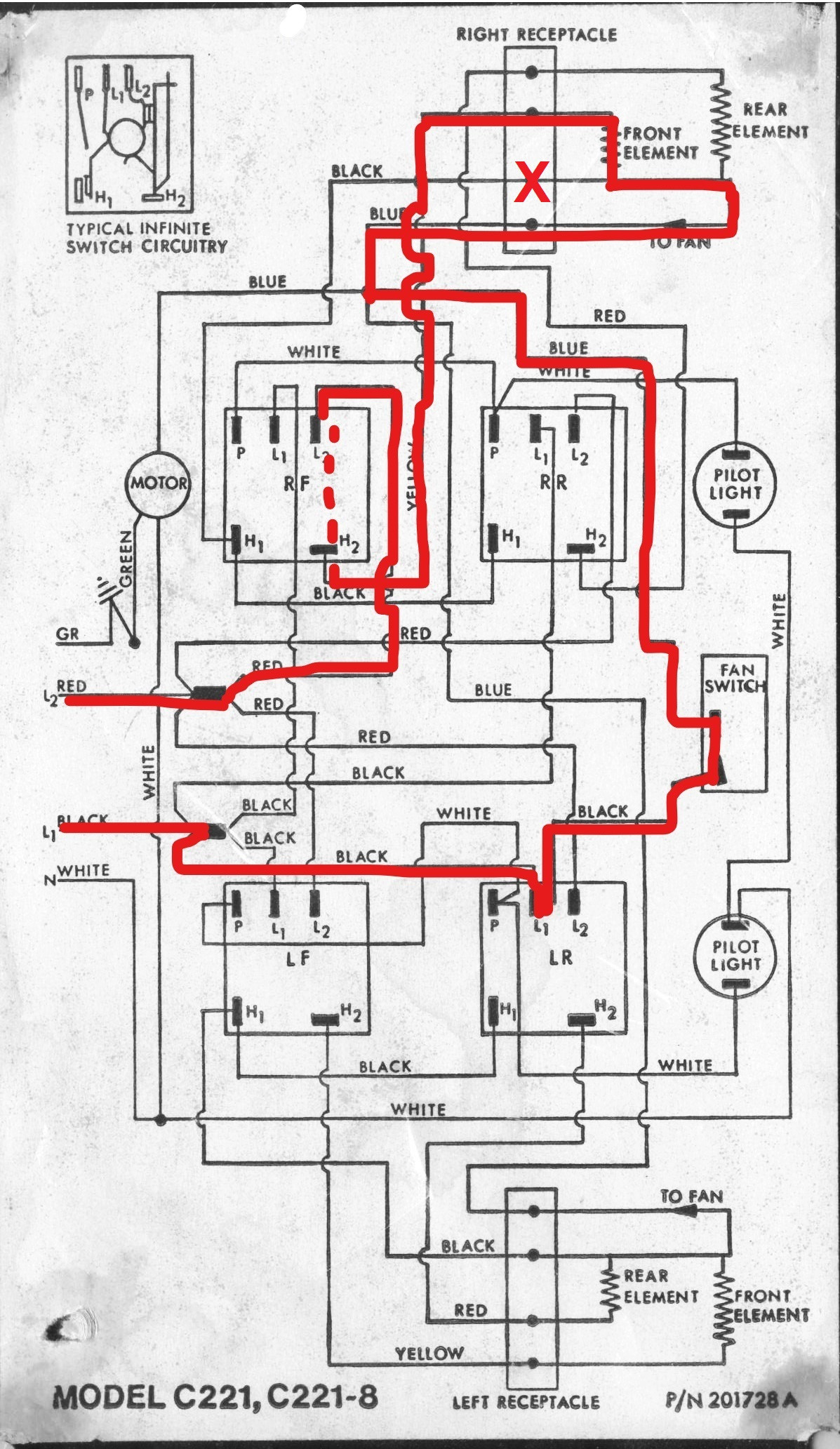 According to the housing for a replacement switch, it is only rated 6A 3A at 250V, whereas the element could draw over 10A; is this an imminent safety issue/fire hazard, or are the faults leading to this issue considered extremely unlikely?

electrical wiring safety stove fire-hazard
Share
Improve this question
edited May 9 '18 at 12:02
chrstphrchvz
asked May 7 '18 at 10:08

Cooktop switches (especially ca. 1983) aren't on-off switches, they are simmerstats - like slow, analog PWM controllers for resistive heating elements. They function by drawing a small bit of current through a heating element inside the switch, which causes a bimetal strip to deflect and "pulses" the L2 contact. A cursory Google search suggests the deflecting L2 contact is more likely to fail (open or closed) than for the relatively static L1 contact (held in place by the knob itself).

Your concern is at least somewhat validated because there is the potential for a short there (barring any fuses or fail-safe devices that aren't shown in the diagram). However, since the L2 contact is left alone in your scenario, you should still be able to turn the burner off and control it normally, even if the L1 contact fails open. It also seems as though the more common problem is a failed switch in general, resulting in a burner that either can't be turned on (relatively safe) or can't be turned off (decidedly unsafe).

Your primary concern is the voltage rating on the switch, which is rated at 6A @ 125VAC or 3A @ 250VAC (or 1/4HP @ 125-250VAC), but in the scenario you describe could see as much as 10A @ 250VAC. Given that the switch is rated for motor loads, it is designed to handle high-inrush current levels at the moment the switch is closed. So how well it fares in your scenario may depend on whether or not the fan was already running. Given the unlikely nature of the scenario, it's plausible the engineers designing your stove weren't concerned about the possibility of powering a stove element through the switch in the event of an abnormal switch failure mode.

Not the answer you're looking for? Browse other questions tagged electrical wiring safety stove fire-hazard or ask your own question.