Can a clogged toilet drain cause a tank overflow?

This is less of a "how do I" question and more of a general knowledge check.

Recently I've been having trouble with an overflowing toilet. Fortunately for me (in this situation), I'm a tenant and not a homeowner so maintenance is provided by the property managers. However, I'm about to be a homeowner in a few months and am simply trying to understand how the fix that was implemented (augering the toilet drain) solved the problem.

Simply put, the toilet overflows. I've not caught it in the act of overflowing, as it doesn't overflow immediately after flushing the toilet. Usually, we find water on the floor and sometimes dripping through the downstairs ceiling (if it's overflowed in the night). Water is found running out of the flush lever hole in a small stream and the water level in the tank is much higher than usual.

When this happens, my initial reaction is to turn off the water line to the tank and flush the toilet, which (of course) drains the tank and prevents it from refilling. Once the tank is emptied and the water is off, the toilet seems to stop overflowing.

After stopping the leak and setting out bowls to collect the ceiling drip, I called maintenance and told them what happened, and that I suspected the float (which is a "floating cup" type, per the internet) may have a leak that slowly allows it to sink and causes the fill valve to reopen. Their SOP is to leave a note whenever they come describing what was done, which in this case indicated that they found no problems with the toilet and that they "unclogged the drain".

To my knowledge, the drain wasn't clogged - at least not in the usual way where the water in the bowl can't escape and flushing causes more water to enter the bowl. Can a drain clog cause the toilet tank to overfill? Am I just missing something obvious?

My wife also reports that the toilet has not overflowed again since the maintenance person re-opened the shutoff, however she did close the shutoff again as a precaution.

Can that pipe be cut down to allow the overflow tube to work as intended? Then, at least, if maintenance won't believe me that there's a problem with the filler valve I won't have to worry about the toilet overrunning when we're not home. 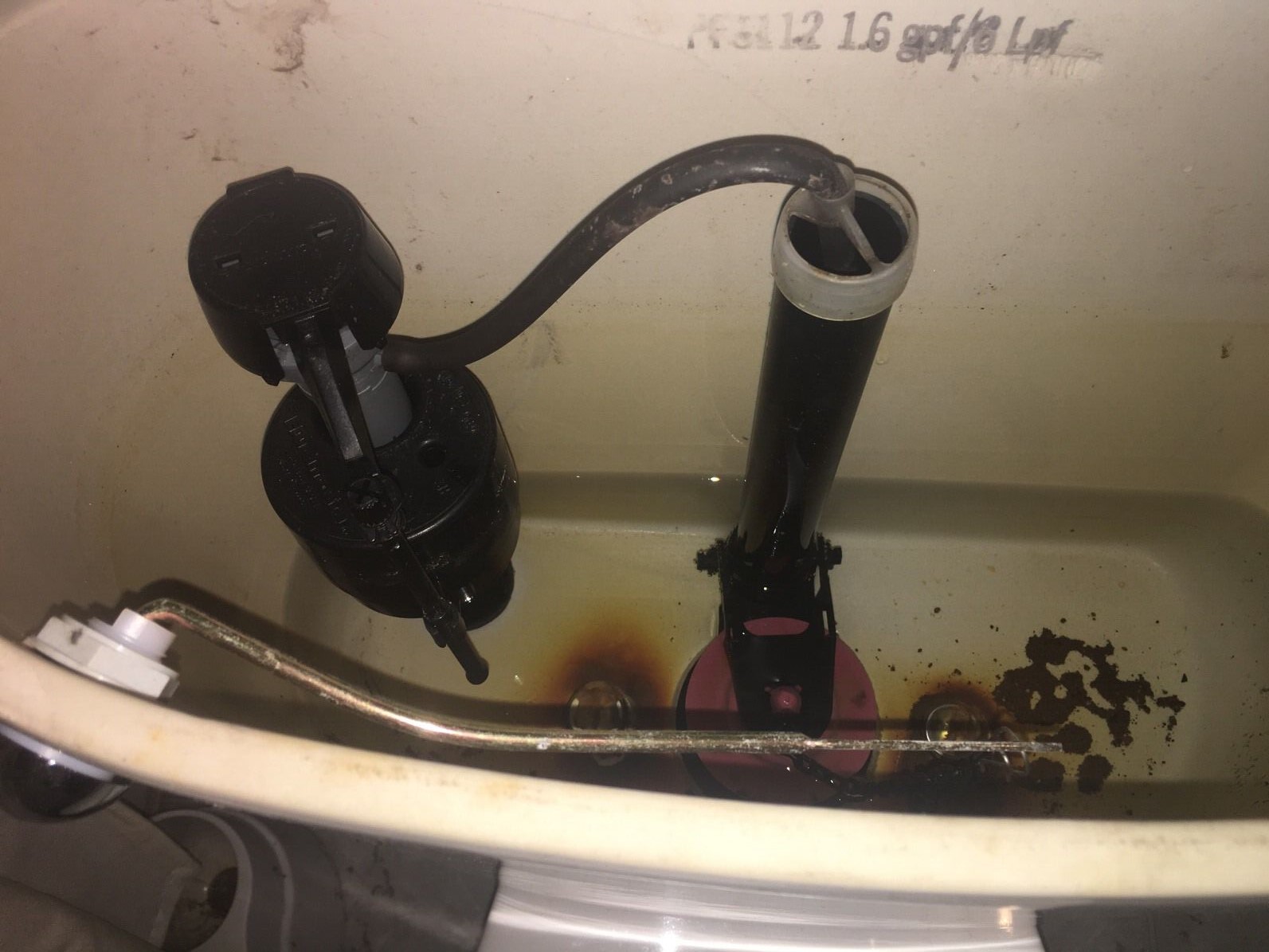 No, a clogged drain won't cause your toilet tank to overflow. Sometimes dirt can get into the fill valve and cause it not to function properly. You could try turning off the water, removing the top black cover on the fill valve and removing guts and then turning the water back on and flush some water through it ( be sure to put something over the fill valve to prevent water from shooting out the top) but it's normally much easier to just replace the entire valve.

As for the water level, in your case you can remove the cover on the over flow tube and cut it down so that it's lower than the flush handle hole.

Of course all of this shouldn't be done by you since it's a apartment but that would be the way to resolve the issue.

Probably the fill valve. Which is most common problem (at least in my line of work) On some types of the older toilets, the fill valve in them have a Phillips head screwdriver or flathead on top of the rod. Sometimes rotating it helps. Not gonna say it’s gonna work. But in some cases or customers I’ve had it has worked.

Update I just relooked at your pic and at the bottom left is a Phillips head. Try rotating that to both left and right does help control the water in the bowl. If that doesn’t do it it might be time to replace the fill valve.

Sounds like a combination of fill valve failing to shut off and the overflow tube being too tall. The drain should not have any effect on the amount of water in the tank.

Sometimes the fill valve is a simple fix (adjust a screw or replace a seal), but they only cost around $10 for a basic replacement model, so if you can't figure it out right away it's a cheap thing to replace. You can generally remove the clip that attaches the hose to the top of the overflow tube to cut it down with a hacksaw, and then replace it.

3
How do I make a new toilet tank on an old bowl flush properly?
3
Toilet tank slow to refill (bowl refills normally)...bad overflow tube?
2
Is it okay to trim the toilet tank overflow pipe?
0
Toilet tank fills after Shutoff valve is off and FluidMaster fill valve also is off
0
Water from toilet tank goes straight down the drain?
0
How is the toilet tank itself refilled?
0
Is my toilet operating properly
0
Toilet bowl cleaner container distorts flushing action
0
How to reduce the amount of water lost through the toilet refill tube?