I just had my hardwood floors professionally sanded and finished with 3 coats of Bona Mega Water Base Satin Finish. Because we’re in the process of moving in and doing other renovations, it was just discovered a bottle of Goo Gone has leaked on the floor and absorbed into the wood (see photos). No telling how long it’s been there, at least a week or 2.

Is this something I can repair myself with perhaps a handheld orbital sander and using the same finish that the pros used? Any advice? 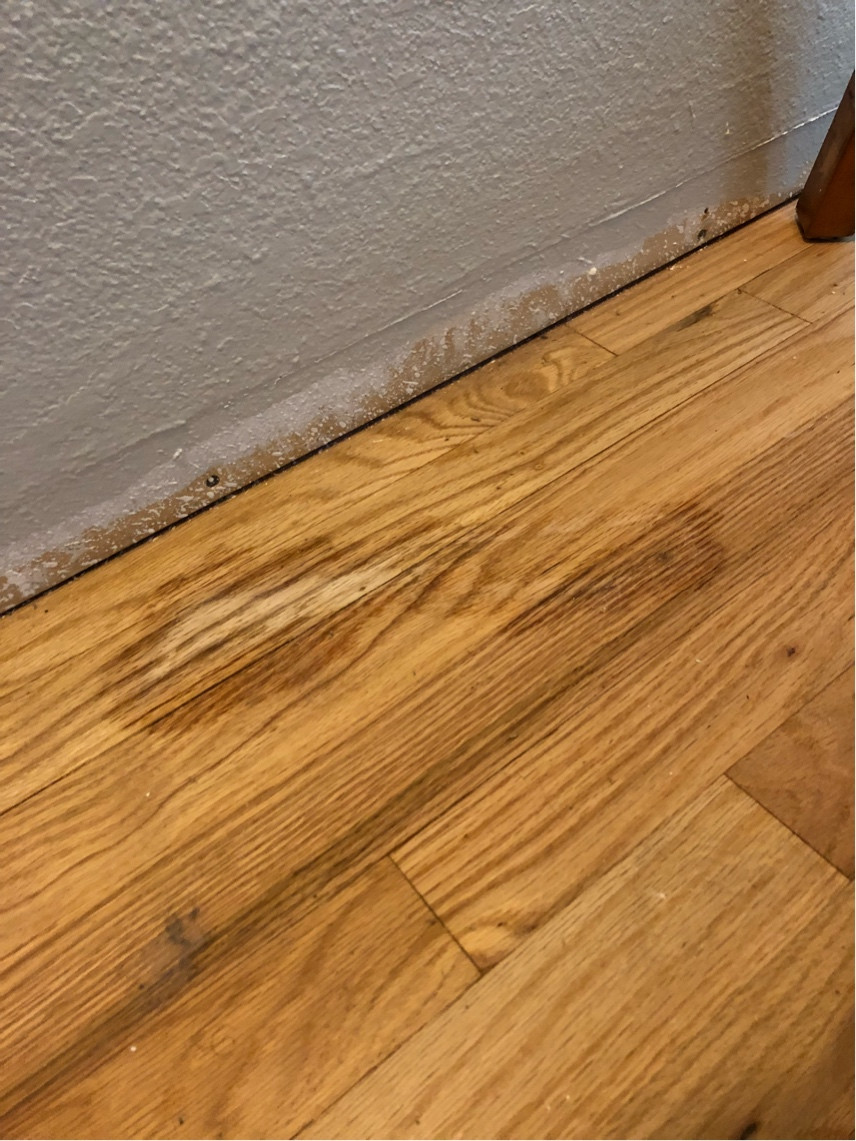 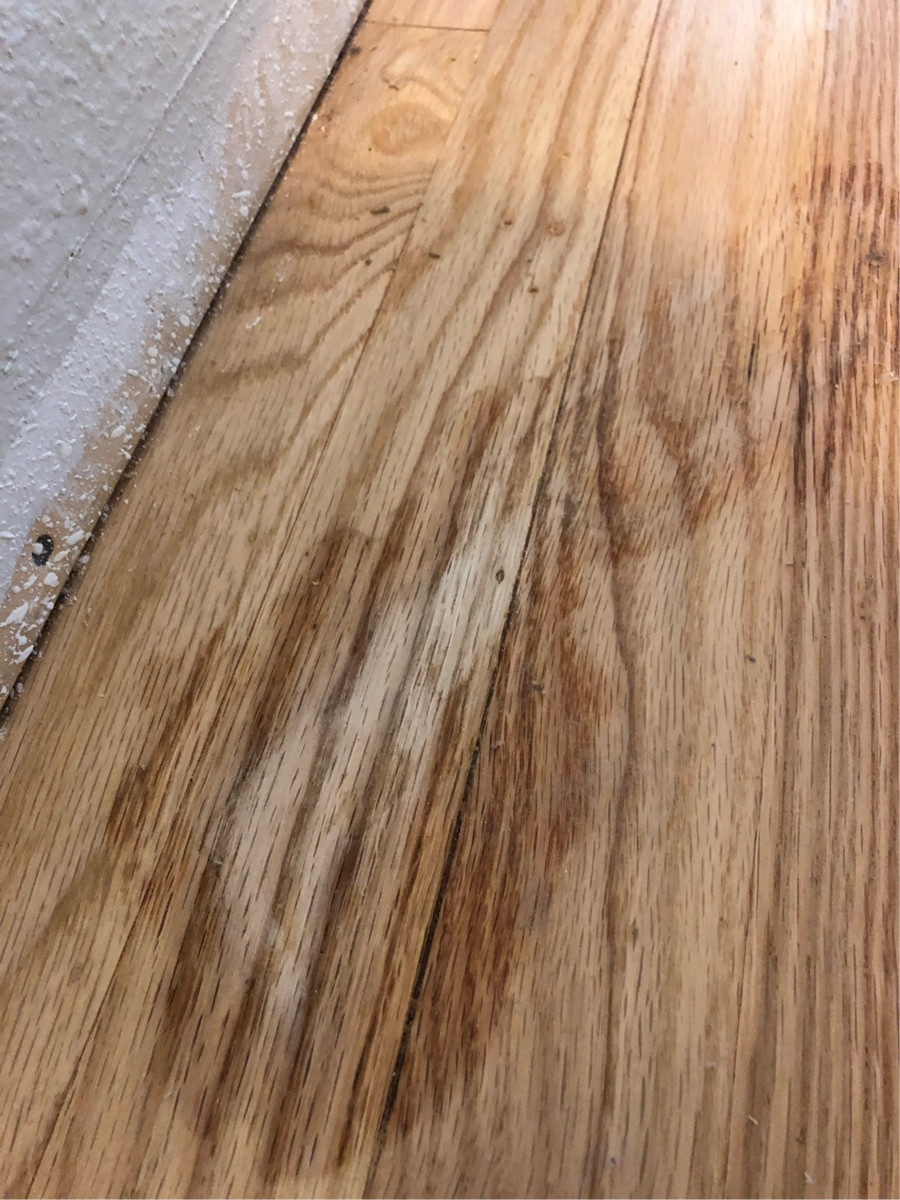 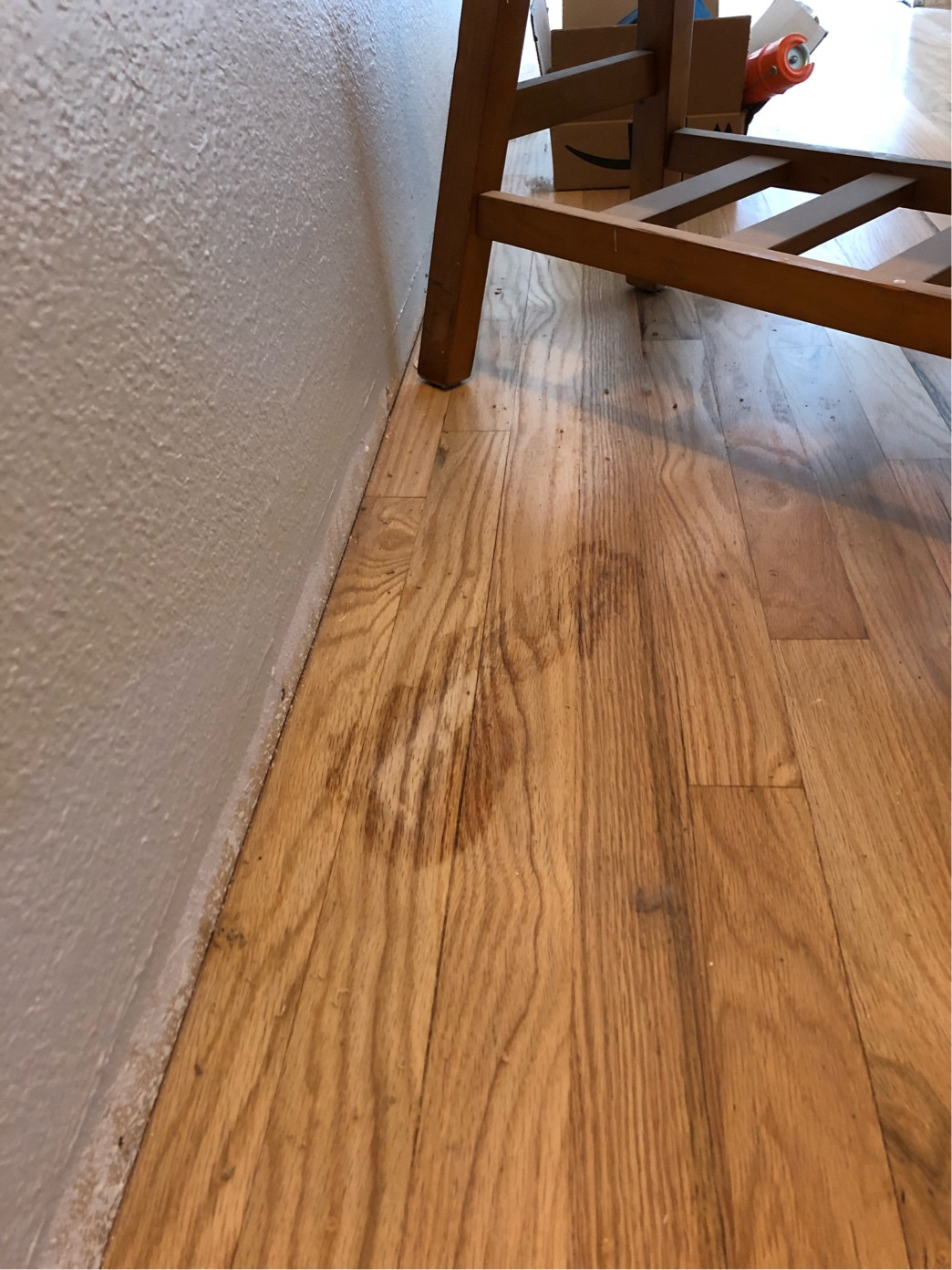 You need to start by getting rid of the Goo Gone.

The Goo Gone should be volatile enough to evaporate unless it's getting trapped under your polyurethane. Try hitting the spot with a heat gun or hair dryer and if you are able to notice any progress visually, then just keep hitting it with heat for 20 min at a time and giving it a break for an hour or three. It may take a few days to lift it fully.

If you don't notice any progress, you may need to strip back the urethane layer using a thinner to allow the goo-gone to dry, then trying the hair-dryer method again. Because this is a water based poly, you'll want to really limit this to the area you are trying to fix rather than gradually feathering the poly.

You want to avoid sanding if possible because sanding down deep enough to remove the soaked in Goo Gone is likely to create a physical and visual low spot. However, be aware that the Goo Gone, due to it's coloring, will leave a slight ring stain once fully evaporated. Rather than totally refinishing your floors (or a good span around that spot) My advice, once you are sure all the Goo Gone is evaporated, would be to just go a head and apply some touch-up poly over it anyway, and wait it out until the next time the floor is due to be refinished to fix it.

To touch-up, apply the thinnest coats you can using an applicator meant for water-based poly, building up and feathering into the poly you stripped. Unfortunately you choose a water-based poly which makes any touch-up blending more difficult / less perfect as it is usually in advisable to thin down water based paints as it can cause the emulsion of oil inside to break up (athough you won't have to worry about toxic fumes while you do it, so that's a plus). In the future, choose an oil based poly and touch-ups / fixes will be a lot easier.

I have never had problems with goo gone on solvent based polyurethane. What I have had happen that is similar was a Danish oil finish that my wife spilled cleaner on that discolored the floor and slightly stripped the stain out. I used a steam cleaner (true steam from a lady bug steam cleaner) fairly powerful but you can rent one, lay a clean towel over the area and steam it and continue moving to clean areas of the towel until the area is clean then put a fan on it to help it dry out when dried restain and do your best to match the color this worked quite well and no sanding so that helps everything look closer to original.

Not the answer you're looking for? Browse other questions tagged flooring hardwood-floor hardwood hardwood-refinishing or ask your own question.