We're getting ready to finish our basement. The basement is already wired for electricity with wall-mounted metal outlet boxes. 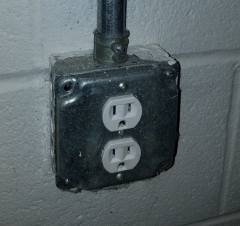 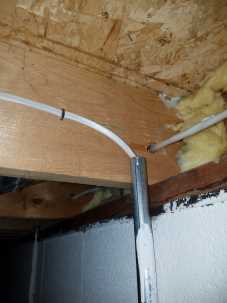 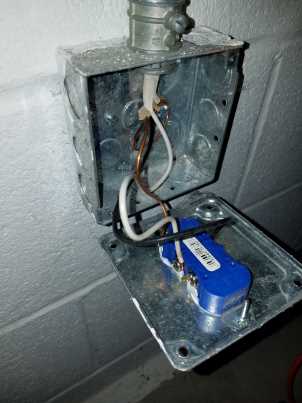 However, the existing boxes will be way too shallow once the insulation and framing are put in. The existing box is 1.5" deep. We're planning to put in 2" XPS, and I'm told the chalk line for the top and bottom plates should be 4" in front of the insulation. So that would put the front edge of the framing 6" from the foundation wall. The guy at the hardware store suggested I use box extensions to bring the box out further. But the extensions are 1.5" so I would need to use three of them to bring the box out to 6". That seems a little awkward to me, and I have to do this with 8 outlets.

Are extensions the best way? Or can I instead remove the existing box and replace it with one that will mount to the frame stud? Should I use metal or plastic? Would I need to extend the conduit to reach the new box? Or should I just bite the bullet and call an electrician?

In any case I will also need to extend the wires, as there is not enough slack.

This is so easy, you'll laugh.

Basically you need to start over.

You can’t conceal junction boxes, they must be left accessible. Those outlets are likely much higher on the wall than you will want height wise in a finished space, extending the wire is not an option unless you leave accessible junction boxes.

Supply-wise you can only really reside the outlet(if they didn’t use backstabs), but you need a different style box and plate. You won’t need conduit with framing and wallboard/drywall. For the extra cost of junction boxes etc, you might as well just buy new wire and do it correctly and straight forward from the beginning. –

You are converting from exposed wiring to "in wall".making for a few options.key is where the wires are in the ceiling. Estimate where your finished outlets&switches are going to be, international code is a good guide, then convert your metal conduit to pvc(gray, just like white drain pipe)within ceiling ,then puzzle out reaching your boxes with "extra" wire. Conduit is only necessary because exposed wire cannot be used in conduit &conduit wire cannot be exposed even within a wall. I think ,since you are not experienced you may be able to get away with plastic boxes, though each inspector has their own pet peeves.

It looks like you have romex wire in conduit, which is a bozo no-no. Pull all the conduit off, and you'll have a great, inexpensive starting point. Install wire as a normal wall build; piece of cake.

3
Wisconsin Basement Finishing questions
1
Do basement walls with metal framing and foam insulation require fireblocking and draftstopping?
2
Re-framing basement walls after flooding. Drain tile with no concrete?
1
Options for in-floor receptacles when finishing concrete basement
3
What type of electrical boxes should I use for outdoor fixtures when fiber cement trim openings are narrow & shallow?
0
Is there such a thing like low profile/depth electrical box to install a power outlet on a cinder wall that has no framing?
2
What is the best electrical box for stucco wall