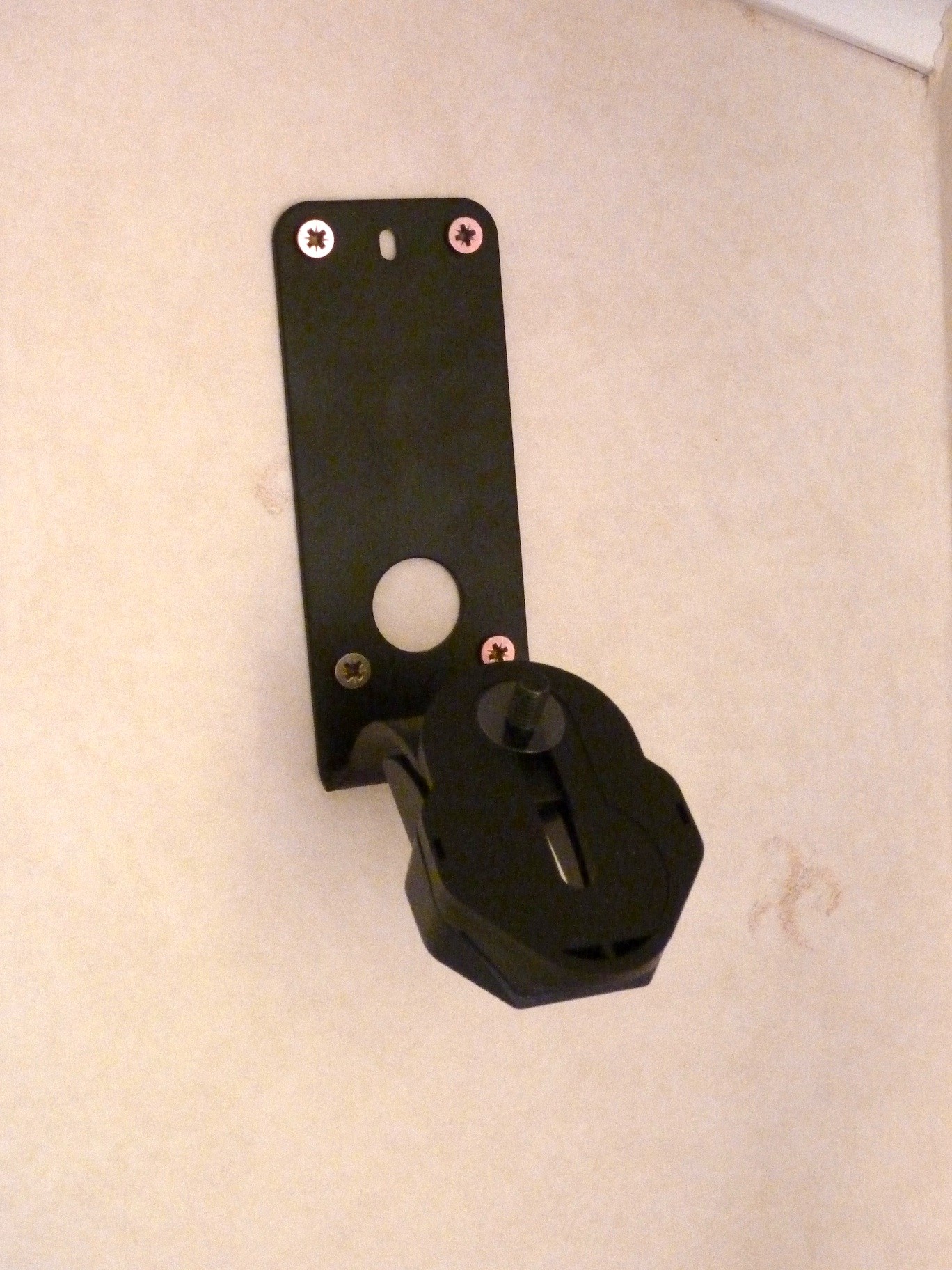 I'm running into some wood immediately after drilling through drywall where I would expect there to be a void. The building was built in 2014. More detail below, but here are my questions:

1) Is it okay to keep drilling somewhat to see how far deep this goes and what happens? I probably already went deeper with the first anchor (see below), but I'm not positive.

3) Can I just use wood screws instead of anchors here?

Thank you for your help.

Edit: I've finished installing the bracket using one large anchor and four smaller ones. I'm still not sure what the wood is. My very rough estimate is that it's 0.2" thick. Commenters have made plausible suggestions, including that because this is a unit-to-unit wall, it could be for fire containment, security, or sound insulation.

I used a magnetic stud finder and chose a spot about 4" to the right of a stud because the bracket is too wide to attach entirely to a stud.

I bought these E-Z Ancor drywall anchors which say they don't need drilling, but I wasn't able to get them any further than the half way point before bringing out the drill. I drilled increasingly wider holes within the tapered hole that had already been formed by screwing the anchor in partially, each time allowing the anchor to screw in a little further until it was able to be flush with the wall.

I decided to use that anchor for the top center hole and find something smaller and hopefully simpler for the other four. These smaller anchors do require drilling. I was able to drill through the drywall pretty easily, but then I hit some resistance, seemingly right around 1/2" in. I tried drilling one of the diagonal holes which is about 4.25" up and 1.75" to the right. Same thing. I drilled a little further into this one and got some sawdust on the drill. I stopped at this point because I live in a shared rental, so I don't want to cause damage or irritate my neighbors.

So there's wood behind this area of drywall and I'm not sure why. I was thinking it could be a fire block, but that wouldn't continue for nearly 4" of height, right? Maybe it's something to do with a previous occupant patching up from a TV mount or similar, given that it's one of the two obvious places in the unit to put a TV.

I'm pretty sure the first anchor installation ran into the same wood but I didn't notice it because the difficulty screwing it in began right where the wider thread began to enter the drywall. I thought I had to drill the hole for that one because of some vague made up idea about the shape of the anchor, because there wouldn't possibly be solid wood there, would there? (no pun intended). The drill got through the resistance at a pretty minimal depth though, seemingly 1/2".

My question is similar to "How can I avoid hitting wood when cutting through drywall?" except I'm pretty sure it's not a previous owner attaching drywall to a wood-paneled wall given that this is a rental unit that is only 4 years old. and

Browse other questions tagged drywall mounting studs speakers or ask your own question.

0
How can I avoid hitting wood when cutting through drywall?

6
Can I use a drywall anchor in a stud to hang a shower curtain rod?
3
Can I hang a key hanger without attaching it to a stud?
3
What's behind my drywall?
1
Will a drywall anchor work fine after it's already open or engaged?
1
patching hole to be reused
7
What is the concept behind drywall studs?
3
Drilled into white/cream colored plastic behind drywall, what is it?
2
What to do if drywall anchor isn't flush with the wall
1
Does drywall “wear out”?
2
Articulated arm wall-mount (13lb. LCD monitor), 25 gauge metal stud, 3/4" drywall