Neutral Wire is used to carry power to light switch - is this legal?

Forgive me for my crappy drawing :) to make a long story short I just moved into a home and I am taking a look at one of the lighting jobs. I noticed the light switch had no power feeding it and the "neutral" wire was hot. I was a bit confused and worried.

After doing some testing I realized the white "neutral" wire was actually the wire feeding the light switch power. Then the black "hot" wire was the wire giving the light can its power. (See picture).

Is this legal (in terms of electrical code) and is this safe? Is there any cause of concern since the light switch has no neutral wire connected to it? 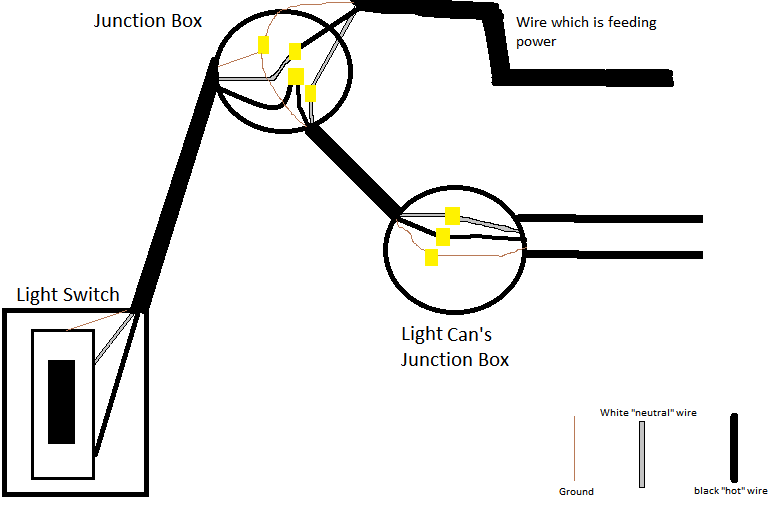 This is fine in an existing setup...

This is the old way a switch loop was done, using the white wire to carry power to the switch and the black wire to carry the switched-hot back to the light. For a dumb light switch, not having neutral at the switch is a nothingburger, so all's well that ends well. There should be electrical tape wrapped around the white wire at each end to reidentify it as a hot, though -- if that's not the case, turn the circuit off at the breaker and add a wrap of black electrical tape around that white wire on each end.

In new work, though, this is not to Code. The 2011 NEC added provisions for neutral (what Code calls the grounded conductor vs ground, which Code calls the equipment grounding conductor) at switch locations in 404.2(C) due to the proliferation of advanced "smart" switches, dimmers, timers, and suchnot that need constant power. The alternatives involve returning that constant current through the load (which is incompatible with LED light bulbs and some other loads) or returning it on the equipment grounding system (which is a dirty hack).

(1) Where conductors enter the box enclosing the switch through a raceway, provided that the raceway is large enough for all contained conductors, including a grounded conductor

(3) Where snap switches with integral enclosures comply with 300.15(E)

(6) Where lighting in the area is controlled by automatic means

(7) Where a switch controls a receptacle load

Informational Note: The provision for a (future) grounded conductor is to complete a circuit path for electronic lighting control devices.

Not the answer you're looking for? Browse other questions tagged electrical wiring lighting neutral or ask your own question.

6
Getting shocked by a neutral wire
1
2 hot wires into light switch and no neutral
0
Removing a light switch cuts power to my entire room. Breaker not tripped. Smart Switch Install
3
How do I know if this switch box has a neutral wire?
0
Apartment using ground wire as neutral
0
Neutral and Live both hot when switch is turned off. How do I connect my new light?
0
Two wire at light switch
1
Convert 2 gang no neutral light switch into 1 gang to power a smart-switch that requires neutral. Possible? UK
0
Adding a ceiling light to this circuit