This property is on a walk-out basement foundation in a heavy clay soil.

In several places, the brick veneer has moved, cracking and causing misalignment as pictured. The one pictured is by far the worst, it is bowing out as you see in the second picture.

As you can see, there have been repairs made to the veneer, and mostly it does not appear to have moved more since those repairs.

This is on the basement level, on the walkout side of the basement. The basement floor is severely damaged from heaving, but the concrete walls show no damage. There have been upgrades to the building to stop heaving - mostly outside drainage, but also a sump pump and filling of cracks.

Assuming the repairs have worked and the veneer in fact is no longer moving, what are my options for fixing the gap? 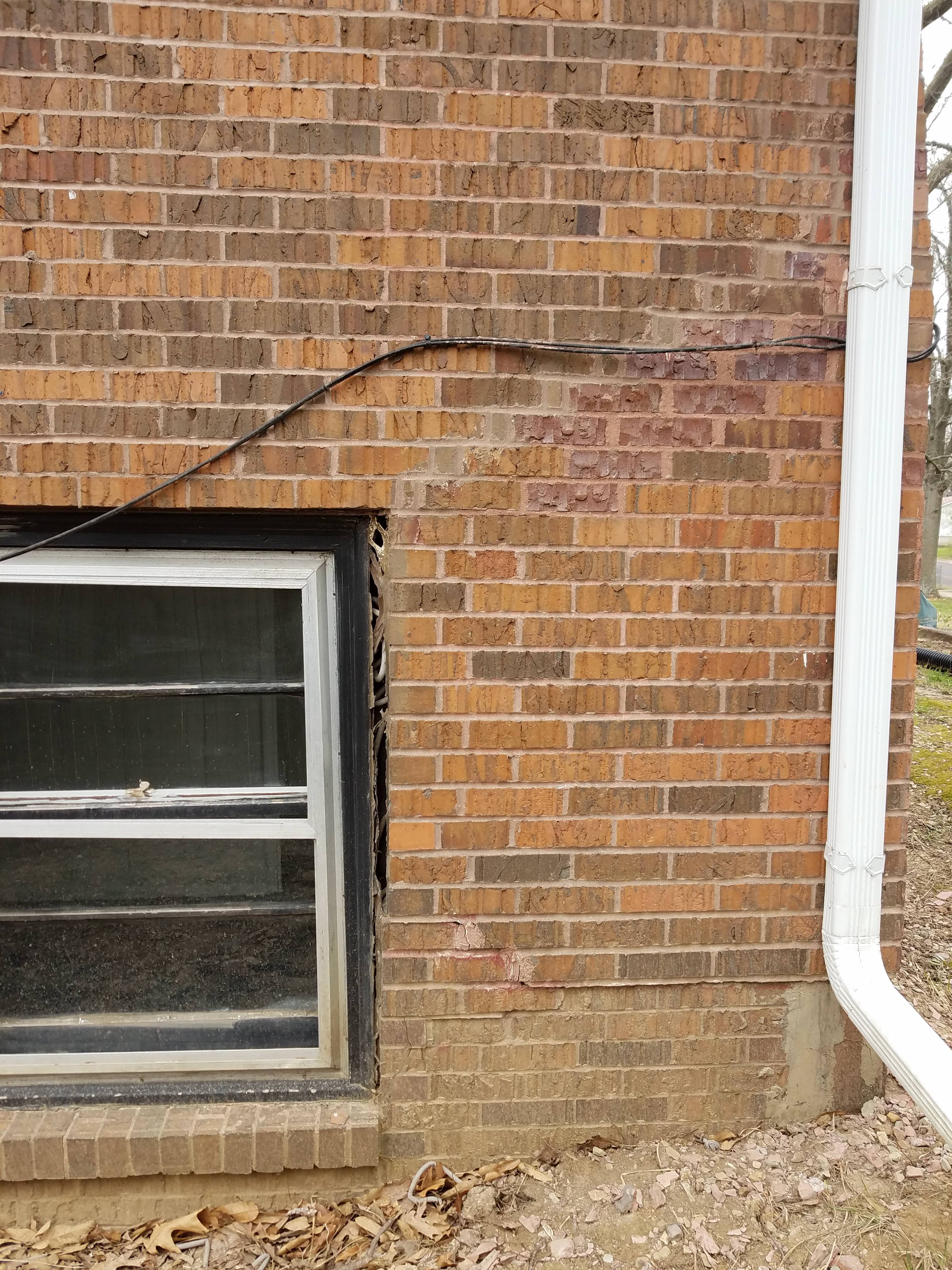 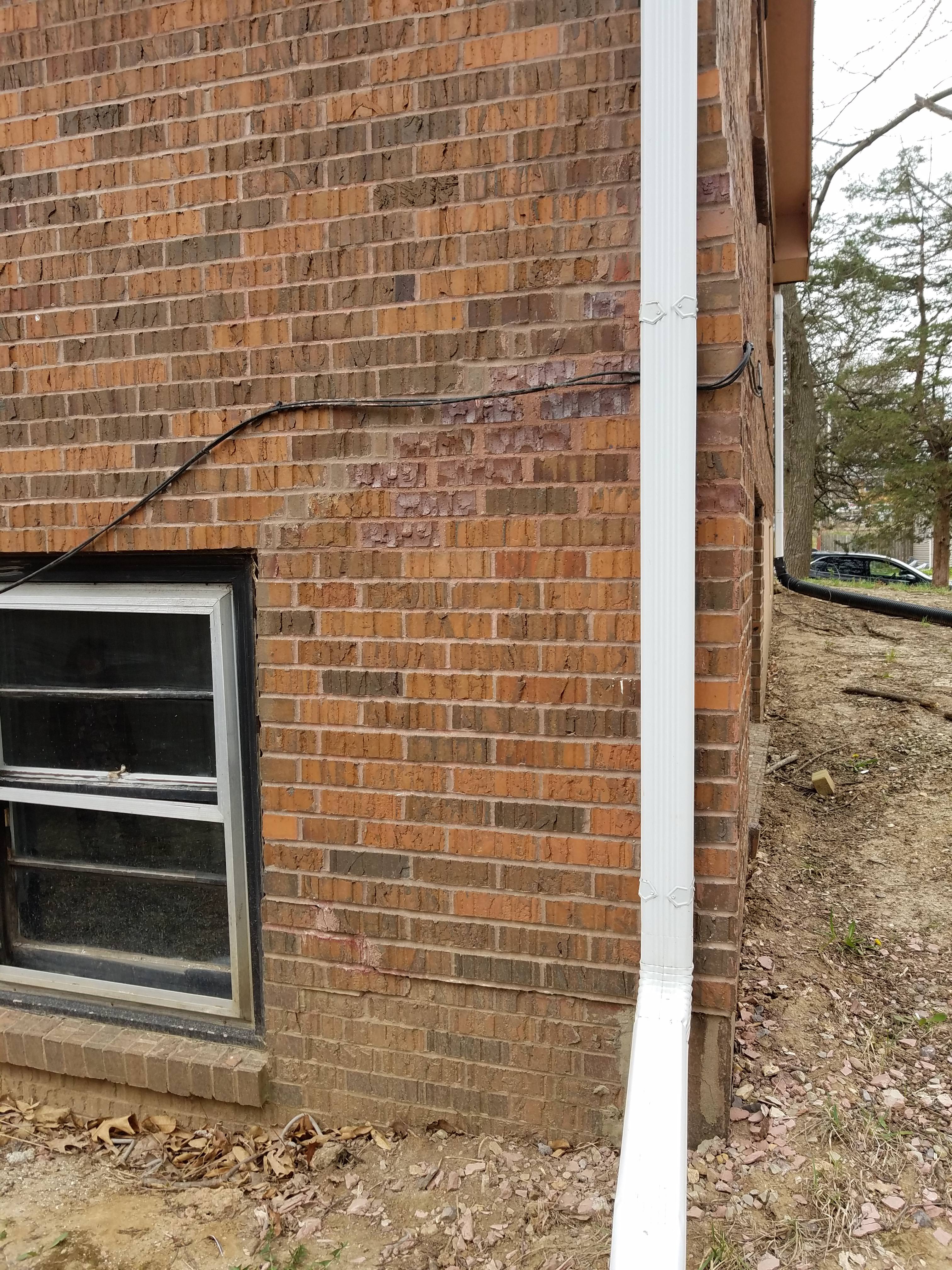 1) Bowing is your biggest and most expensive repair issue. Bowing is an indication of wall failure. It’s probably from failed ties. (Ties rust away.) We repair historic brick veneer walls and it’s expensive. You need to secure the brick veneer to the STRUCTURAL portion of wall. (Brick veneer is not structural.) You need to re-secure the veneer by drilling through the veneer and installing bolts at about 24”” on center vertically and horizontally all over the wall. You can place a steel plate on the outside of the wall and then secure the other end of the bolt to the inside of the wall...OR, you can drill from the inside into the back of bricks and set a bolt into epoxy in the hole. This will preserve the face of the brick. (This is how historic restoration is accomplished.)

2) Are those face shells laying on the ground? If so, what has happened is water has penetrated into the face of the brick (bricks are porous) then frozen, then the water expands causing the face shells to pop off. Repair is impossible.

3) Those diagonal cracks are from foundation settlement. The bricks sit on a concrete shelf of the foundation and it appears the foundation has settled. You may not see cracks in the foundation, but the bricks could crack anyway. Masonry is EXTREMELY susceptible to cracking with the slightest of movement. (BTW, we design mortar to have less strength than bricks so the mortar cracks rather than the bricks. It’s easier to fix mortar joints than replace bricks, if and when there’s a problem.)

4) Obviously the previous owner knew about the settlement and tried to repair. They did the “patching” without fixing the problem. If you just “patch”, expect more settlement.

5) There should be weep holes along the bottom of the wall. They allow moisture to run out from behind the wall.

6) Bricks are porous and need a clear sealer re-applied regularly.

3
Foundation repair: time frame
3
How to repair / reinforce deteriorated footings and subsoil below brick & concrete porch
2
Bought a 20 year old house last spring and it appears to be settling - when to call in experts
0
Collapsing wooden basement walkout
1
Additional brick veneer to existing construction
0
Sealing behind brick veneer
1
Finishing around brick veneer fireplace
0
Crack in concrete slab of house - what best to fix it with?