How to detect concrete or brick behind plasterboard

I'm trying to hang a 4Kg electric guitar on a wall that sounded hollow however when I drill in after just under 4cm the drill head hits what sounds like either brick or concrete. I've bought expanding metal rawplugs that are 4cm long that look like: 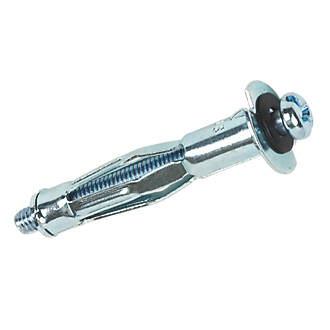 But these now can't be flush with the wall to expand correctly. I've also bought self drill metal plugs which are 31mm in length and look like:

Apparently these can hold 8Kg per screw (and the guitar mount has 3 holes) so that should be fine but there's nothing on the packaging that says they will hold 8Kg per screw, that was just what I was told in the store so I'm not too confident.

I know the general consensus would be to mount these with a longer wall plug and screw into the concrete or brick behind but how do I know I am actually hitting masonry? I have a wood and metal stud finder which is not detecting any studs or live electrics but I want to be confident before attacking this with a hammer drill

You do not have to anchor into masonry for this load. Drywall with proper anchors will easily hold a 4 kg load. That first type of anchor you show is an old and outmoded type. There are several new types that are much better, and the 2nd picture shows one of those.

You might have to cut off the screws that come with it, if they contact the hard surface behind the drywall. No pre-drilling is required to install the 2nd type. Get a large Phillips screwdriver and force it into the drywall to the first threads then screw it in snug, but do not over-tighten. If the sharp end contacts the hard surface behind the drywall, then back it out, cut off enough of the sharp end so that it no longer contacts, reinsert, and screw in.

Not the answer you're looking for? Browse other questions tagged drywall drill mounting or ask your own question.

3
What's behind my plasterboard?
3
What's behind my drywall?
2
Drill getting stuck about two inches into stud
1
2-3kg blinds into drywall/plasterboard
0
Can this 35lb mirror mount on this wall?
1
How can I anchor to a 1" thick hollow wall with a very shallow cavity?
0
Mounting a TV to Concrete Through Wood Paneling and Air Gap
0
Drilling a hole in a dry-wall backed by concrete or plaster?