How did they drive nails into hardwood before modern power tools?

I know of two methods to drive nails successfully into hardwood. One is to predrill; the other is to use a power nailer, which can drive the nails with enough force that they will go in cleanly and not split the wood.

My house, which was built more than 100 years ago, has oak floor boards throughout that were face-nailed into the subfloor. This was done before most power tools existed. There is no sign of the wood splitting or other problems occurring when the nails were driven in.

My question is how the guys who built my house would have nailed these boards in without the assistance of power drills or power nailers. I'd be surprised if they predrilled each hole manually (there are probably thousands of holes throughout the house), and I assume that even their impressive early-twentieth-century biceps could not come close to matching the force of a modern power nailer.

Anyone with knowledge of historical construction techniques know how nails were driven into hardwood (especially applications like floorboards, where you would care about making it look pretty) before power tools?

How do you get to Carnegie Hall? Don't discount the fact that everything was hand nailed at one point. Sheathing a building in board by hand works wonders for increasing efficiency with a hammer.

One hundred years ago green or air dried lumber was the norm, rather than kiln dried. Even seasoned lumber had generally been in the air under a year at the mill. Wet lumber is substantially easier to work with than dry, which includes nailing. (Solid wood is also easier to nail than composite or engineered lumber, which can skew perceptions if you're used to modern materials.)

While Matthew's answer about the wood being greener and thus easier to drive a nail provides some explanation as to how nails might have been more easily driven into early hardwood floor and with spiting than kiln-dried wood, it seems to leave out the fact that, in all likelihood, pilot holes were drilled and bees wax or soap was rubbed onto the nails to facilitate driving.

In early hardwood flooring (before ship-lapping and tongue and groove), traditional square nails were very expensive and hand forged. Moreover, because of their enhanced gripping power, these nails were hard to remove, thus it was often common practice to burn down homes to recover the nails, rather than risk bending them [see this reference]. Thus, drilling a pilot hole was generally not considered to be very time consuming with respect to the nail creation / removal process. Indeed, most historic woodworkers recommend drilling small pilots and even hand drill them today.

In some instances (thinner wood planks) square nails can of been driven without pilots. Square nails sheer the wood fibers rather than wedging between them (as wire nails do), reducing the risk of splitting. For this reason, and somewhat counter-intuitively, it is advised to dull the tips of wire nails before driving them when there is some worry of splitting the wood.

As ship lapping and tongue and groove offered a way to drive nails though a thinner section of the board hiding the nails and any potential splitting in the process, some wood workers might of started skipping the pilot hole step, especially as tools were invented to facilitate this. While I'm not sure when it invented, in the 80's I helped my dad install hardwood using a "ratcheting nailer" and sledge hamer. The ratcheting nailer is basically a tool that acts like a nail holder / nail set for a sledge hammer. 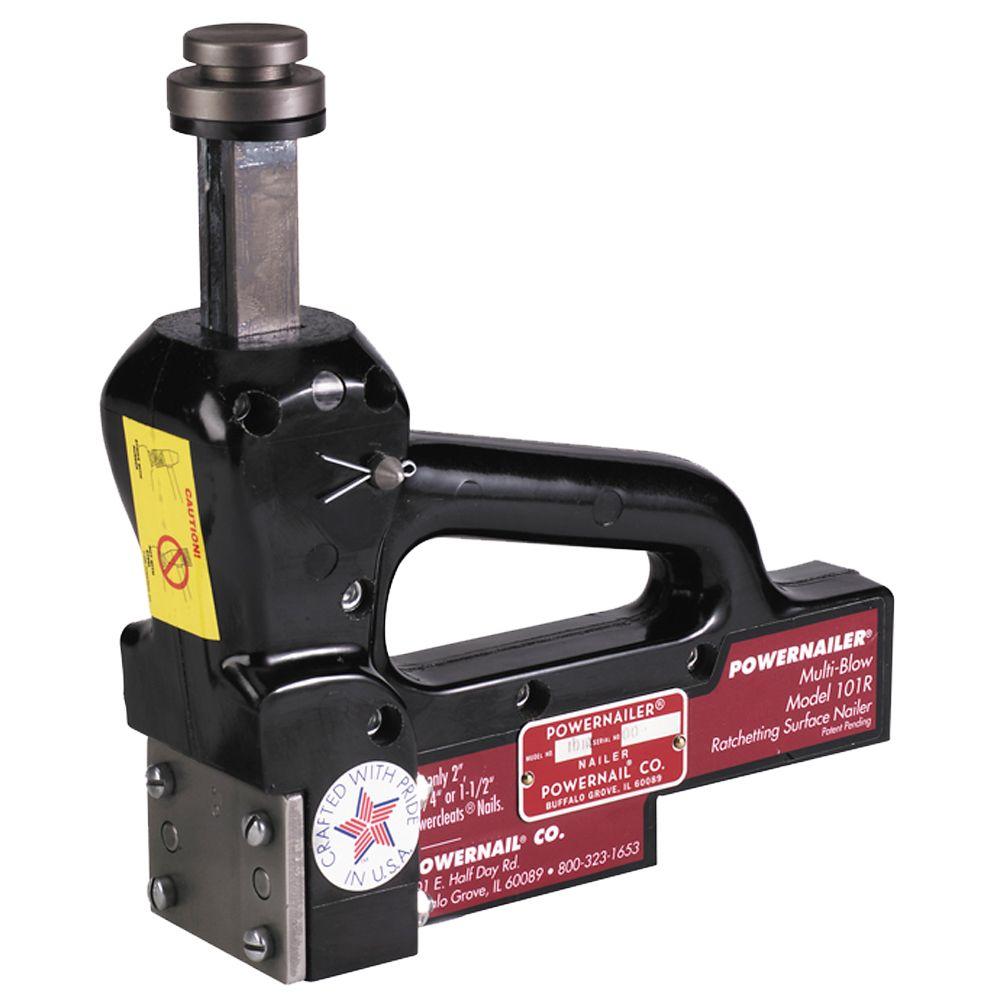 Heating a nail in fire until it becomes red can produce a hole in the wood. Creating a hole with a heated nail is much faster than predrilling -but heating the nail might take some time; this disadvantage can be overcome by having multiple nails kept in fire - while using one nail, the others are heating.

Not the answer you're looking for? Browse other questions tagged hardwood-floor or ask your own question.