What are the basic differences between a mesh and regular/iron pool fence?

I'm about to move into a house and need to fence the pool before I move the family in. In searching the web I find that pool fences seem to fall into two categories: mesh or iron. What are the differences between these two types of fences? 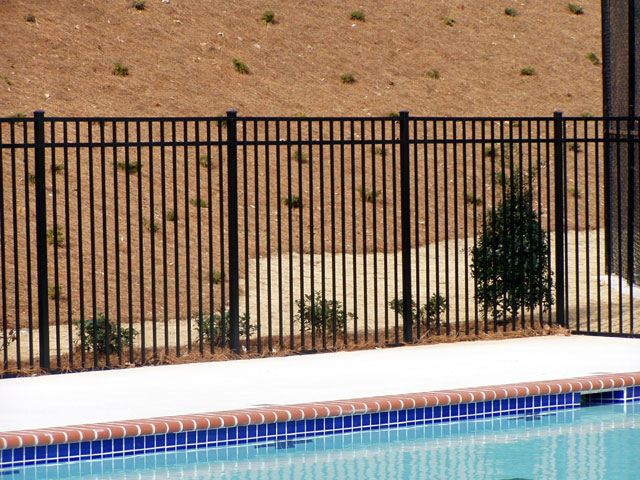 ... Is the more traditional choice. A fence like this is going to be very durable, generally only requiring a coat of oil paint every few years and replacing minor touches like the caps on the posts. These are also generally more aesthetically pleasing as they are typically installed as part of the overall decor of the pool. However, iron fences are generally more expensive, especially as a retrofit; the normal installation method is to anchor the posts in concrete, which would require drilling through your existing concrete pad to set them. It's also possible and accepted to "surface-mount" this type of fence onto an existing pool deck using L-brackets welded to the posts and lag screws for wood, or concrete anchors for a pad. This isn't as strong, as the screws can pull out over time, but it's usually more than enough. Lastly, an iron fence hurts more to run into; they don't have much give (not any if properly installed, really). 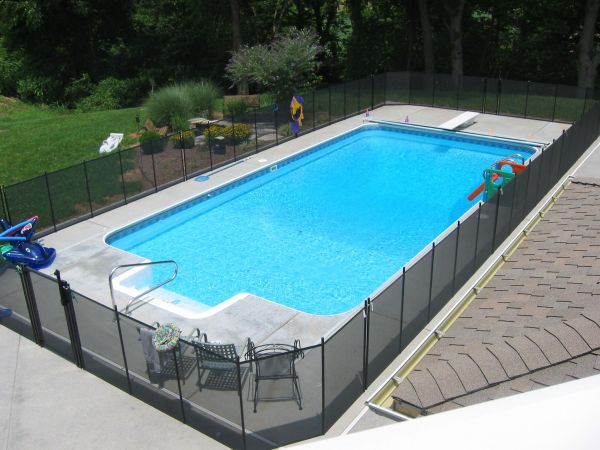 is a newer option. These generally cost less, are easier to install, and the aesthetic can be pleasing (instead of the thick iron bars, you have a filmy mesh, reminiscent of a privacy screen). Along those same lines, the mesh provides slightly less visibility than the iron, especially in low light. This can be a two-edged sword; the neighbors can't see you skinny-dip, but you may not see a child falling in the pool in the evening or at night. Before you go this route, ask the supplier for a demo panel you can set up between your pool and an indoor vantage point to check the visibility as the day progresses and make sure it's to your liking. The mesh has some give, so a young child running into it won't be injured as badly (it may still throw him back onto the ground).

On the downside, the mesh screens are more easily cut or torn, and if this happens the entire panel can rip in half allowing pets and kids into the pool area. Do not use these if you have big dogs that like to scratch on the back door; they'll do the same on these and break through pretty quickly. The mesh is replaceable, but it's a hassle and a safety concern. These fences generally come prefabricated for ease of installation, but that generally means there's one way to install them; anchored with L-brackets to your deck. An adult running full-tilt into a panel could break the fence down. And while they can look good, they can also look cheap (usually due to poor installation, or simply because a particular mesh fence product IS cheap).

I assume you are referring to chain link type vs vertical metal rods. You could also use a wood framework with a wire mesh so you can see the pool. Its a matter of what you like the best and can afford. Just be sure you can see the pool from the house.

Not the answer you're looking for? Browse other questions tagged fence pool or ask your own question.

6
Setting posts for a sturdy garden fence
4
What should I know before plastering a concrete pool?
3
Horizontal Fence on a slope; what's the best design?
1
Fence gates with two holes for lock and handle
1
What are my options for replacing a rotted fence post that is slanted in a large concrete slab?
0
Can stranded wire handle the same high voltage as solid core?
0
How can I reduce noise from my neighbor's pool pump 12’ to 15’ away from my house?
0
double fence and easement issues
4
fencing under electrical transmission line
1
Care and maintenance of wood fence that is rotting because of damp leaves on the other side