After a house rewire I have about 40 holes. Some are smooth surface, many are textured ceiling. Should I be using the green lid joint compound and taping it or Plus3 and no tape?

For the textured ceiling start with the piece cut out with texture or a new flat piece?

I've read a lot online with some conflicting information. 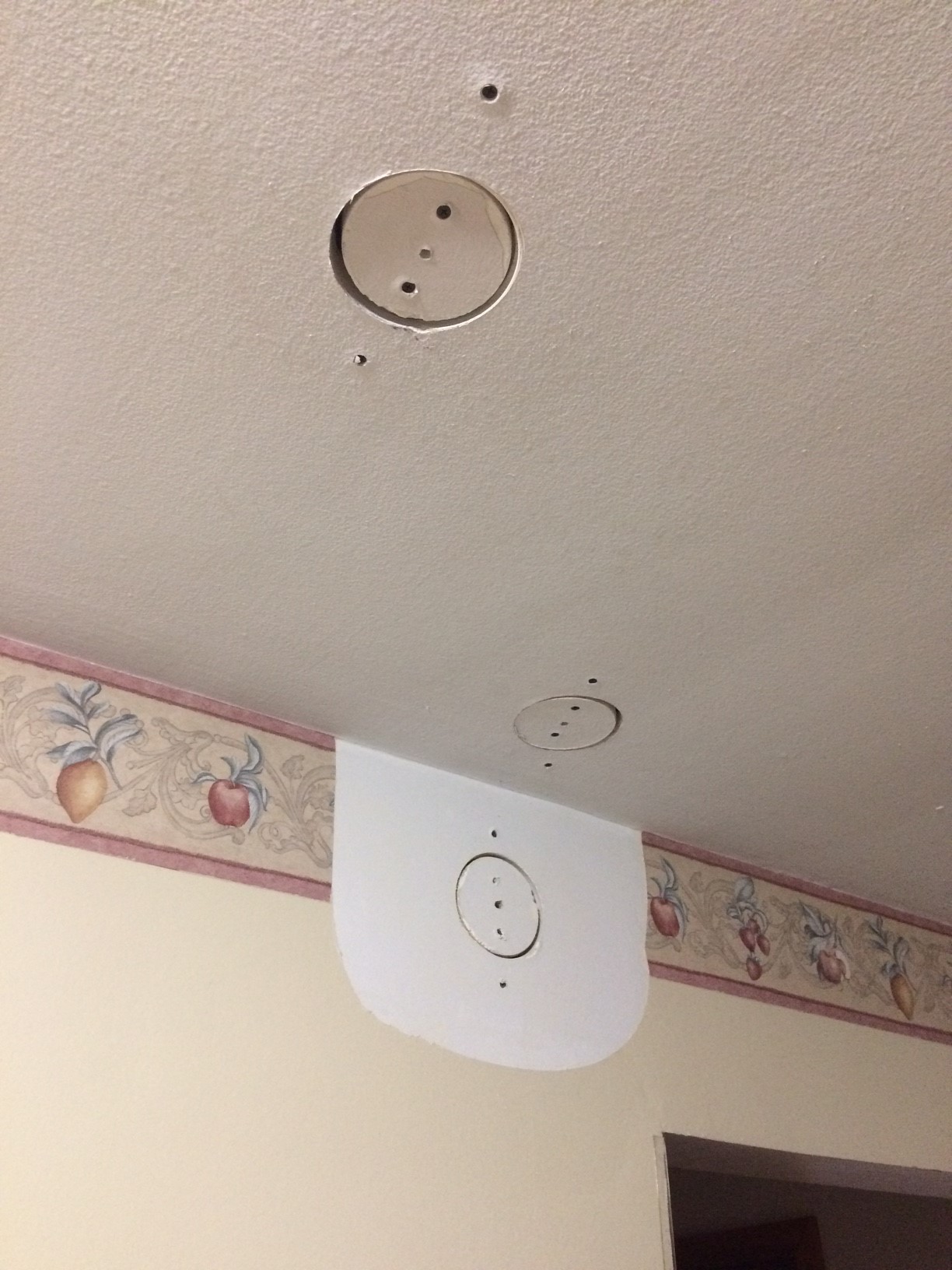 I'm having a hard time articulating this without a visual aid, so bear with me.

You can eliminate the need for paper tape by leaving one side of the paper on the drywall patch after you score / snap it. So instead of cutting the other side of the paper after the score / snap, you peel it back an inch or two on all sides, and cut the paper so that you'll have a sheetrock patch with a built-in "tape" to overlap the seam. This youtube video demonstrates the idea:

This is easier for patches with straight lines that you score easily, but I think with some finesse you could do the same thing for a circular patch, especially if you have the right sized hole saw.

What the other guy said would work great too - and I 100% agree that any texturing should be done afterwards. You may even want to throw on a layer of primer before you texture to make it hold better.

Also, you can get canned spray-on texture to use on a patch job like this, which should make the job simpler if you don't have all the other equipment. They come in a few varieties so you can match the existing texture.

I would use all purpose joint compound (green lid) and paper tape if you wanted a relatively simple and reliable patch. Follow with more thin coats of all purpose until you're satisfied that the lump is fared quite wide. (Lots of thin coats is always better that putting it on thick and then having to sand, because as you probably know, drywall dust gets everywhere.)

For a more complicated but quicker fix (saves time taping, saves a day of drying), use 6" wide mesh tape and setting compound (marked on the bag/box as "20" or "45" setting type joint compound). Apply topping mud right after doing all the taping. Repeat topping mud as needed. On the downside, mixing your own mud from powder is a bit of a pain, and it goes hard before you know it. (I say topping mud because it sands easier than either AP or setting compounds. The downside is that it's frequently only available in large-ish quantities, so you'll probably have to feel bad about tossing some out.)

It would help on the textured spots to sand scrape down the texture around where the tape is going, as that will be less of a lump for you to fix later.

Your first pic looks like it has a considerable dimple at the screw at the top of the picture. Make sure that's flat before you tape.

In any case, texture after -- there's no point in trying to texture before.

I forgot about the possibility of ceiling texture containing traces of asbestos... so, at the very least, scrape instead of sand, spritz with water to contain dust, and use a decent p100 mask. Or have it tested and know for sure what's there.

Not the answer you're looking for? Browse other questions tagged patching-drywall drywall-mud or ask your own question.

3
Fixing minor tape blemishes/bubbling after a fresh paint job
0
Repair L-shaped notch in drywall
0
Which Product to Use for Repairing My Drywall
0
How can you replicate Sand/Perlite?
0
Patch small holes in an internal stucco wall
0
Too Much Mud Leveling over New Drywall?