How do I lay hardwood over a transition in a room that is not level? 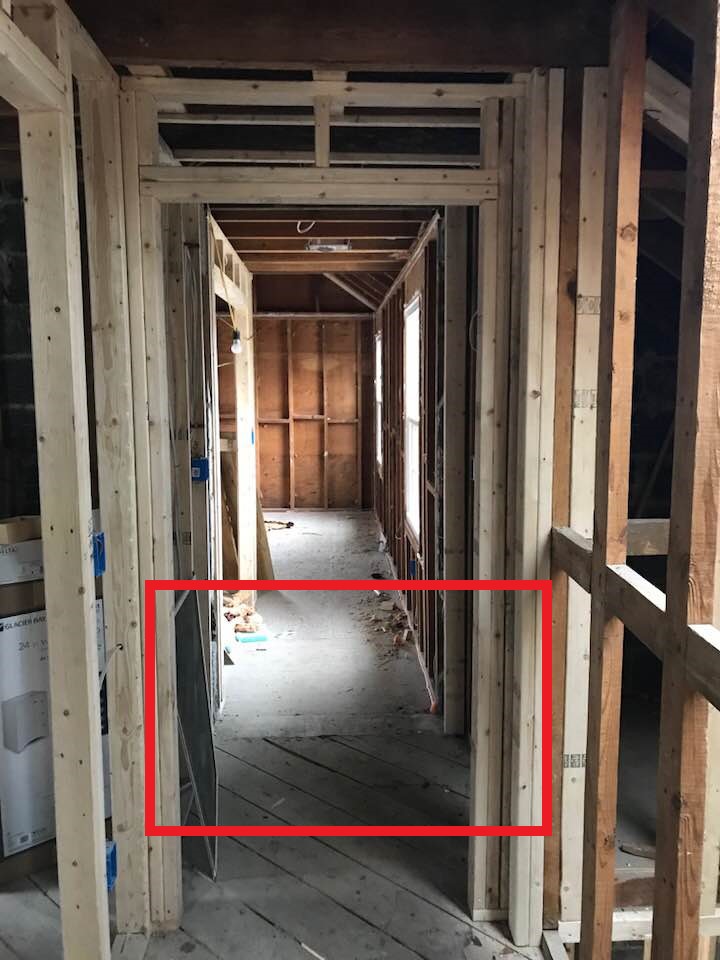 We are going to be laying hardwood in our entire upper floor. The subfloor between two of the rooms is on a bit of a slope. What's the best way to lay the hardwood over this transition. We are going to be laying it longways through the transition since that is the direction perpendicular to the floor joists. Would it be best to run the hardwood up to the transition and put a board going across at the turning point and make a transition? Fixing the subfloor isn't really an option at this point.

Rough Description: The transition is a doorway that is 36" wide in a hallway. The subfloor on both sides of it is pretty flat. So it'll be fine on both sides of the threshold, but the exact line where they meet will be the issue. In the picture you can see the different subfloor transition between the two rooms. It's made of mortar. There used to be a wall there when the addition was put on the house (in the 70s). It's about 8" wide and the level difference is about 7/16" over that 8"

Dave Welch may have answered this to a degree But I will put my spin on it.

Break out the mortar bed to expose the subfloor it covers, get either 1/2" plywood which is in reality, slightly less than 1/2" thick and lay it all over the lower floor level bringing it up to withing working distance of the other floor. If that will be too thick, OSB is 7/16" and use that. No need to get anything that is rated as underlayment that will go under a nail down floor. Underlayment is geared more towards vinyl and other thin flooring installs. Screw it down then add your paper and flooring. Re-secure the diagonal subfloor with screws before you add the flooring over the older subfloor.

Get rid of the slope (only time a transition is acceptable is in a doorway-keep an even flow). You have already put down you U-lay anyway. Screw the floor first the diagonal planking. Install Kraft paper (eliminates squeaking) and screw down 7/16" U-lay flooring. If there are any digits or high spots Sand or fill. That is if I'm reading it right.

Not the answer you're looking for? Browse other questions tagged subfloor hardwood transition or ask your own question.

6
How can I tile over a floor where hardwood is attached directly to joists?
1
Can I install laminate next to tile without using T-moulding?
3
Proper Orientation for Plywood Subfloor under 3/4" Hardwood
0
How two install hardwood floors in a long room with a subfloor that has a plane change in the middle?
0
Fix/redo grout between ceramic tile and wood laminate before putting down threshold (transition)?
2
Installing plywood over 1x6 subfloor in preparation for engineered hardwood
0
Hardwood to Tile Different Height Transition