Is it safe to use a flexible duct near the end of an 18ft dryer exhaust run?

I'm replacing a gas dryer in a condo that previously had 2 plastic flex pipes and a 5ft aluminum rigid duct.

I planned to replace it with rigid steel. I got most of it dry-fitted correctly, except the end of the run. There's about 2 feet between my new run and the exterior vent. See side-view image below (note: the picture does not show that the exterior vent is a little lower and also to the right): 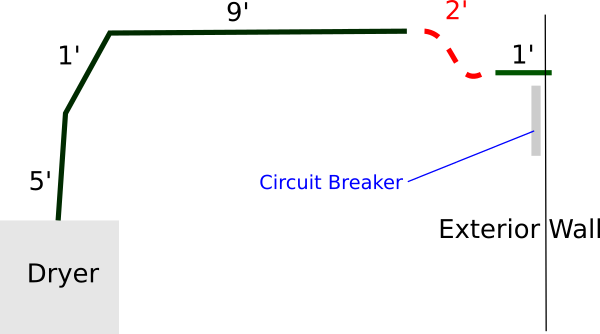 The end of the run is in a tight area, in a small 3x3 closet that also contains a circuit breaker. To get through here with rigid steel ducts, I'll need several elbows and short extenders. I'd rather use a bit of semi-rigid flex vent in a small C-shape instead, for ease of installation and less seams.

The red dashed line in my picture represents where the flex duct would go. It would be about 2 to 2.5 feet long.

Edit: I ended up admitting to myself that I was trying to be lazy and fanangled a few adjustable elbows to cover this gap. I'd still like to know the answer to #2.

The drier installation instructions should typically have venting parameters that should be followed. That being said, rigid duct will always flow more air than corrugated flexible aluminum tubing. 4” aluminum flexible tubing flows approximately the same air as 3” hard pipe. All of the little ridges slow down air flow significantly. While a few feet of flexible tubing will probably not drastically reduce air flow I would always avoid it if at all possible. The less resistance the faster your cloths will dry.

1
How do I connect a dryer to a dryer vent?
4
Why does my dryer duct have such a long vertical portion?
2
Is it safe to use a former furnace flue to vent my dryer through the roof?
5
Why does it take my dryer 3 hours to dry a load of clothes?
3
Can 2 - 6" flex ducts be combined into a single 8" rigid duct
1
6" Ducting straight to in-wall rectangular ducting
2
Dryer vent through cinder block and then through yard - is this ok?
0
Flex-duct as a Trunk?
0
Can a single 8" flex duct be split into a 5" flex and 7" flex?
1
What is the purpose of these ducts in HVAC/laundry room ceiling?