How can I determine if my receptacles are grounded, and how can I fix it if they are not?

My upstairs office has 3-prong outlets, but according to my surge suppressor, they are not grounded. I took one of the sockets off to inspect how it was wired, and it seems to have a ground wire connected to it.

My house was built in the late 1960s. Is it conceivable that all 3 sockets are "bad" with respect to their ground wires? Or is it more likely that the ground wires are not actually grounded? Would it be worth my time to replace one to see if the problem is fixed?

Short of running a copper wire from downstairs up through my window, I don't have a convenient path to ground from the office, if the copper in the wall isn't grounded. I'm running into occasional instability on my UPS because of the lack of ground.

electrical grounding
Share
Improve this question
edited May 1, 2012 at 17:38

It is extremely unlikely that all three receptacles all have bad grounds. Not impossible, but unlikely.

The most likely scenario is that your home was built before grounding became required by code (1962, plus however long it took for your state/municipality to adopt it), and then someone renovating after that time put in 14/2 Romex with a bare ground for the outlets, but then found that the supply wire from the panel didn't have a ground and didn't bother to replace that wire. So, the ground is either shorted to the neutral or left open.

The other likely scenario is that there is a discontinuity in the ground between these three outlets and the supply wire. The necessary wires exist, but whoever last messed with your home's electrical didn't connect them properly.

An outlet tester, and a more thorough inspection of the wiring, can tell you. Head to Home Depot, Lowe's, Ace, whatever, and pick up a 3-prong GFCI outlet tester: 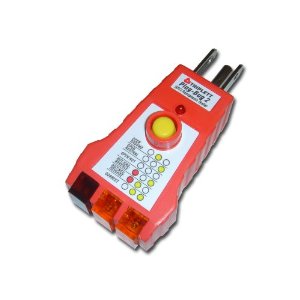 Plug it into all of the outlets on each receptacle; ideally, you should see the two amber lamps light, but that's unlikely if the surge protector doesn't detect a proper ground path. What's more likely is that you'll see only the middle lamp light, indicating an "open ground".

Unfortunately, because the neutral and ground are supposed to be continuous (they both tie directly to the neutral bus strip in the service panel), there isn't a really good way to detect a neutral-to-ground short or swap without opening up all the outlet boxes; a 3-lamp tester will read "correct", and a multimeter will read continuity between neutral and ground no matter whether they're correct, swapped or shorted. However, this scenario is very unlikely in your case, as the surge protector should read "grounded" if the ground pin has continuity.

With the symptoms confirmed (hopefully), turn off the breaker (or pull the fuse) for this circuit, and open up all the outlet boxes. Verify that all of the wire bundles coming into each of the outlet boxes have a bare ground wire, which is twisted together with any other bare wires in the box, and is also connected to the outlet's grounding terminal (it is also acceptable, if the outlet box is metal, for the wires to be screwed into the box itself; the outlet will then be grounded through its chassis and the mounting screws. If the box is a resin or thermoplastic, the ground screw of the outlet chassis must be used).

If that doesn't indicate the cause of the problem, you will need to determine which of the various wire bundles is fed directly fro the panel. This is generally done by disconnecting all the black wires from all the outlets, then turning the power back on and VERY CAREFULLY probing each one with a non-contact voltage tester, like this: 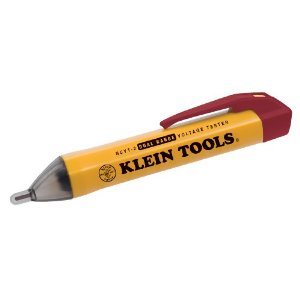 The black wire that lights up is the one fed most directly from the panel; however, it may not be the actual wire run from the panel itself, as there could be something further "upstream". The usual culprit is the switch for the lights, especially in older homes (newer NEC code encourages lights and outlets to be on different circuits, by encouraging calculation of demand load based on separate lighting and appliance branch components, so you're not fumbling around in the dark if your hair dryer shorts out). If your NCVT lights up on anything else that you know is "dead" when the power to this circuit is off, turn the circuit back off and pull those things out of their boxes to inspect those wires. Check for the existence of ground wires, whether they're properly continuous with all other grounds, and with all black wires disconnected, whether any black wire still lights up with the power on.

If the trunk that seems to be the main power feed does have a ground, use a multimeter to measure the ohms between the neutral (white) and bare (ground). It should be zero. If it isn't, the ground is probably not properly connected to the neutral bus strip at the panel; this is where you call in a qualified electrician, because the rails in a fusebox or breaker panel can kill you instantly with one wrong move. If the ground doesn't exist in that supply wire, that's the problem; you'll need to run a new length of grounded Romex to the panel, or alternately run a green-jacketed ground wire to another box with a known good ground (I THINK this is acceptable; an electrician can verify). Understand that if you have a fusebox and the electrician has to open it up, he may insist on replacing it with a breaker panel in order to bring everything he's touching up to current code.

6
Can I run a ground wire of a single circuit to the panel outside the house?
8
How can I ground old 2-prong receptacles? (120V)

6
Can I obtain grounding from a different outlet?
4
What's causing the popping noise from my speakers?
0
surge protection -- grounding in a slummy apartment without ground access
2
Tester showing ground, but I am not seeing a ground
0
USA outlet states not grounded from surge protector for all outlets in only 1 room in my house
2
Can I add an additional outlet using an existing outlet that has no ground wire?
4
grounding outlets and old wiring
6
Is my plan for incremental addition of grounding to home outlets safe and code-compliant (US in 2022)?
3
So is my 1950s/60s era 2-prong outlet junction box grounded or not?