How do I improve Pergola Stability?

The deck is nearly finished but I have a small structural problem with the pergola. A left or right force near the top of the pergola (such a a tall person leaning on the post) leads to a bit of noticeable wobble. Everything is rock solid at the deck level, and there is no wobble in the in/out direction. The span is 12' from post to post. The beam is 2x6 cedar, with 2" x 2" notches where the pergola joists connect with a six inch screw coming in from the top.

I'm thinking up putting 2x6 cedar diagonals at the posts to the beam, connecting at the first pergola joist on each side (20" from post) at a 45 degree angle. Does this sound like the right thing to do? Is 20" enough? The next joist would be at 40" from the post, and would come down too low. 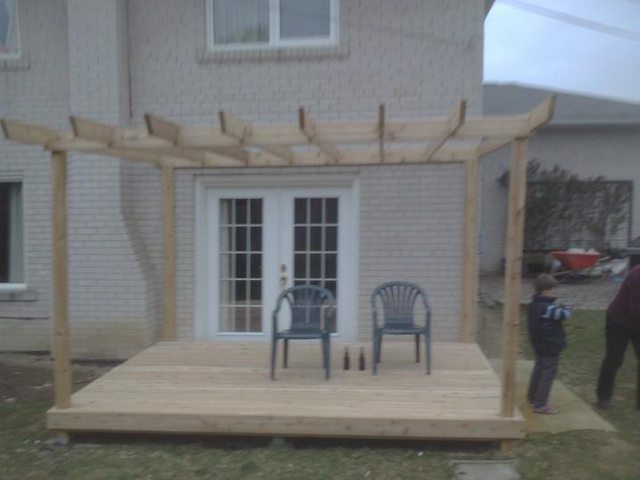 This is an exaggerated view of the flex. 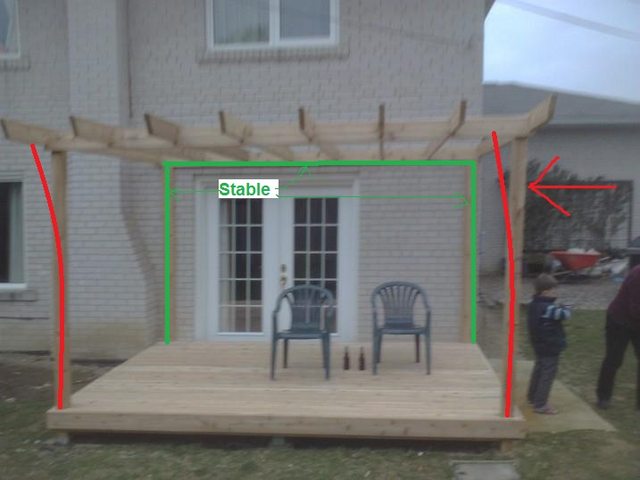 RESOLUTION: I've added one 2x6 45 degree brace in the upper right corner. It stabilized it significantly. I'll put up the other side when time allows. 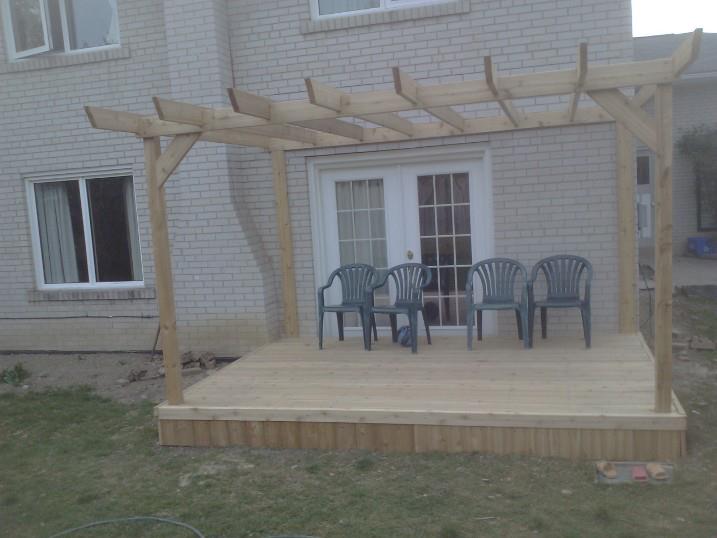 The pergola is much like a stick framed house--the framing itself resists vertical forces (gravity) but in and of itself, has no resistance to shear forces (side to side). For a house to stand up on its own, the sides need to be braced against shear forces...typically that's done with plywood sheathing. Barring that, diagonal bracing can be used.

On the pergola, since it's attached to the house, the house is acting as shear resistance on 3 sides of your pergola, but the front is the weak spot, as you've found out.

You will have to do something, though. Even a 'wiggle' of a couple of inches will cause problems over time as the wind rocks it back and forth. The hardware may not fail but eventually the wood where the hardware connects the members will fail with wear over time.

Of the options I listed, I'd probably start by getting some large L plates. It's likely the least expensive option and you can hide them fairly easy on the inside of the posts and beams. Alternatively, you might be able to use some heavy duty metal shelf brackets. As a bonus, you might find some with some architectural detail that will look nice.

PS: After re-reading your question, I have a few structural concerns:

Again, these are all assumptions so apologies if you've already accounted for those issues--but if not, please do consult local codes. I'm concerned that the structure is way under-built and a good wind storm can send large pieces of wood flying in every direction--dangerous to your home and anyone in the vicinity.

The simplest solution would be to run tensioned cables diagonally across the top of the trellis. Since it is tied to the (hopefully? ;-) ) solid brick wall, it will resist torsion along the diagonals. Then the posts will be relegated to their proper job of keeping things up.

I'm not sure how the cross beams are attached to the support beam near the house, but it seems to me that would be the point you need to focus on. Any small amount of flex in the outer most posts can be translated into movement, because the cross beams are able to torque at the ends. 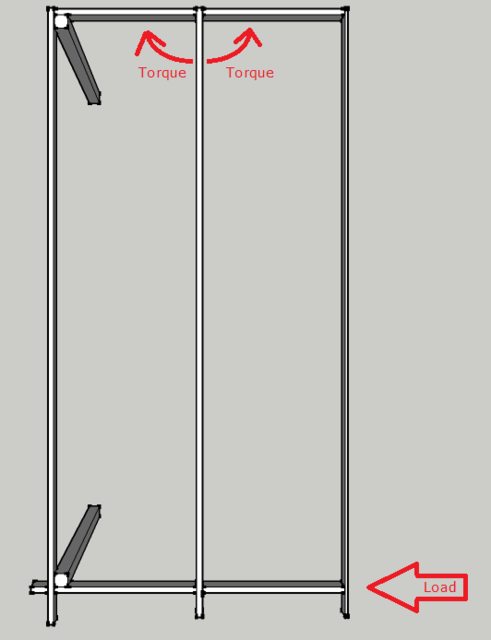 You may be able to eliminate this torquing, by adding in an additional support beam near the house. Like this. 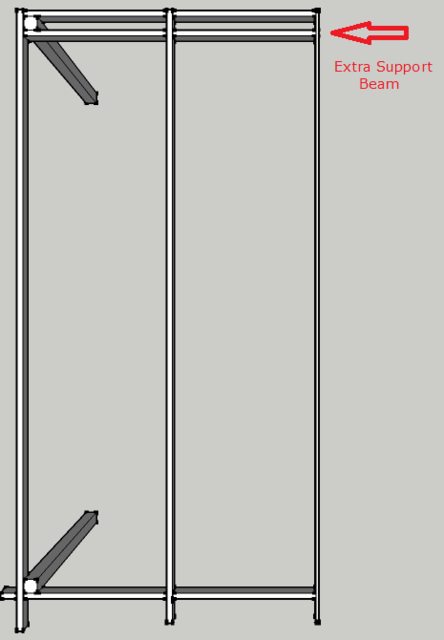 Due to the length of the cross beams, this may not eliminate all of the movement. Any flexibility in the cross beams span could still translate into movement at the outer posts, but it should be much less than you are seeing now.

In most pergola construction, support beams are doubled up at the posts to limit torquing. Tight fitting joints will also eliminate some movement. If you don't need a mallet to fit the joints, your notches are too loose.

I realize this is a late answer, and I hope your pergola still looks good. However the structure appears to be under built not only for strength but also for esthetics. The construction would be much stronger if the posts were 6x6 and the trimmers were perhaps 2x10. 2x8 joists notched in by 2 or 3 inches would be good and leave the trimmers uncut. To brace the pergola against shear, a couple of 1x3's at a 45 across the top joists would be decorative and add tremendous strength to the finished project.

Not the answer you're looking for? Browse other questions tagged deck structural pergola or ask your own question.

14
We built a pergola, is it safe?
3
Is it normal for a freestanding pergola to wobble a little bit?

3
Can I build a pergola on an existing deck, without digging more footers?
3
Can I reasonably build a pergola on top of an 8'x12' deck?
5
How do I keep my corner pergola from wobbling?
7
How do I install this knee brace to my pergola post?
3
How can I extend my deck posts to support a pergola?
3
Adding a pergola to an existing deck?
1
Please help - wonky post location on pergola - concerned with shearing and stability
3
Is it normal for a freestanding pergola to wobble a little bit?
2
Adding a pergola to my deck; ok to replace corner railings posts with pergola posts?