Can I install a switch between two GFCI outlets so that only one can be used at a time?

I have a GFCI receptacle installed on the side of my house in a weatherproof box. It is on a dedicated circuit. I need another receptacle on the other side of the wall in the car port so my wife can charge her Prius. I don't want to run another circuit but I also don't want both receptacles on the same circuit because at some point they will both get used and trip the breaker (or become a fire hazard). So I'd like to install the new one and add a three-way switch on the hot side to switch between the hot feeds on the receptacles. Then only one can be in use at a time. See illustration below. The top is two receptacles in parallel and the bottom is two receptacles switched. The switch and 1st receptacle would be in a double gang weatherproof in the carport and the 2nd would be outside on the side of the house. 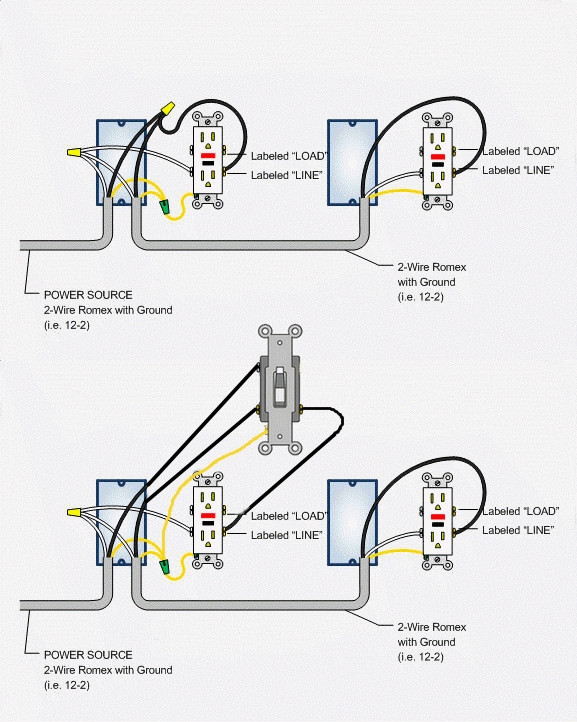 Does anyone see a problem with doing this? Is there anything in the code which prohibits it? Any advice is appreciated.

This way of doing it is a little risky, because some GFCIs don't like to have their power interrupted on a regular basis.

A GFCI+receptacle combo device creates a zone of protection in its own sockets and anything downline that is attached to the LOAD terminals. Hot and neutral must feed symmetrically from LOAD. Ground bypasses the GFCI entirely (and that's important for it to work).

I'm not fond of your arrangement because aside from severing power to GFCIs, it violates a few of my "rules":

So I would recommend installing one GFCI device that is upstream of the switch. Then use the output of the GFCI, via the 3-way, to feed two plain receptacles. 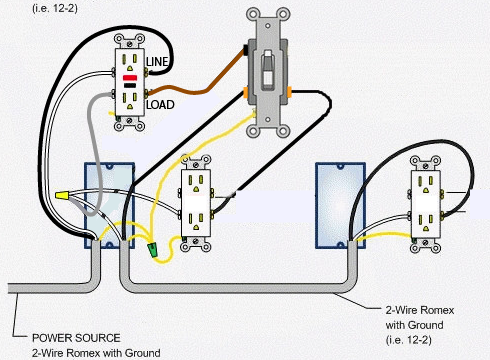 Here I use brown/gray for hot/neutral in the protected zone, then I switch back to Romex colors just because I didn't want to redraw all that.

Just avoid the 3-way, breakers are there to avoid overload, just daisy-chain the next outlet and, at worst, circuit breaker will do its job.

Also most 'light' 3 way arn't strong enough to hold big currents so what risks to start a fire is the switch itself.

Not the answer you're looking for? Browse other questions tagged gfci or ask your own question.

2
How do I wire a light switch and outlet in the same box?
0
gfci breakers vs afci / dfci
1
Cannot determine which breaker has my 3 dead outlets on
2
GFCI/AFCI Trips With No Load And New Wire
1
Problem with outdoor gfi to switch to outdoor pond pump
8
Why did my GFCI by my kitchen sink burn up?
3
Is it possible to wire 2 GFCI receptacles on 2 circuits with 12/3 wire shared neutral?
0
Replace old receptacle/switch combination with a GFCI/switch combination
1
How can I correct my wiring to eliminate sequential GFCI outlets?