need wiring diagram for a bedroom

Wiring Diagram for bedroom needed. I will have one ceiling fan with light controlled by a three way switch then from the ceiling fan unit need power for two independent switches to control led light strips in two seperate closets. attached below is what I am thinking but I need advice / second opinion on the best and code compliant method to wire this room. I have access from attic to drop down wires where need be. I need closet lights to be able to come on or off regardless of whether or not the ceiling fan light is on or off. Need help as soon as possible with any ideas. All lighting will be LED and eventually be using a smart home system. thanks for your cooperation and assistance in advance. 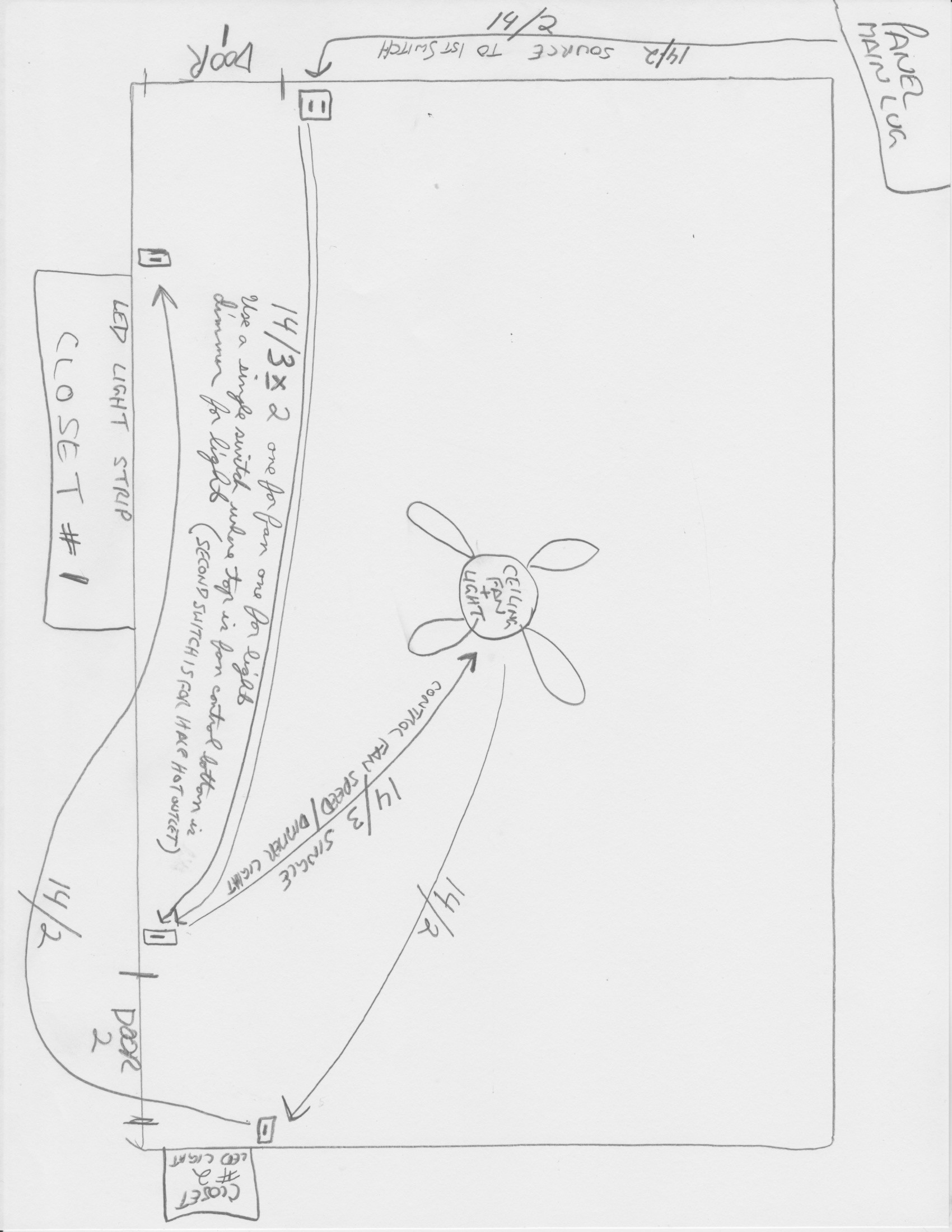 You only have always-on power at the first switch (the 3-way by the door). At the fan/light, you only have switched power, controlled by the two 3-way switches. So, you need to run a 14/2 connected to the power coming from the panel (at the switch by the door) to the two closet switches to supply them with power.

You need two wires to have an electrical circuit - "hot" (black in house wiring) and "neutral" or "return" (white in house wiring). When you wire a 3-way switch, you need an additional wire connecting the two switches: The neutral wire is always connected, and the switches choose which of the two other wires to make the hot leg of the circuit. When both switches are connected to the same wire, the load gets power (the light/fan comes on), when they are connected to different wires, the load is switched off because there isn't a complete circuit.

You could have an "always on" circuit at the light/fan, but you would need to run 14/4 - four conductors - between the two 3-way switches - neutral, plus the always-on hot lead, plus the two switched wires. Then, from the second 3-way switch (the one connected to the light/fan), you would run 14/3 to the fixture, with neutral (white), hot (black) and switched (red). At the fixture, you would connect neutral and switched to the light/fan to supply it with switched power, and you'd have the neutral and hot leads to continue to other uses, such as your closet lights.

That's not the way I would do it, though: As I said, run a 14/2 to supply your closet lights, tapping off the mains at the 3-way by the door. That avoids having to use 14/4 altogether, and you only need 14/2 going from the second 3-way to the fixture - neutral and a (switched) hot lead. 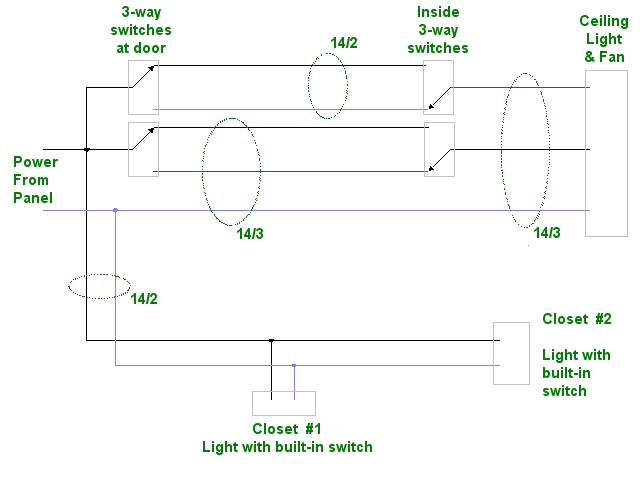 In this diagram, the blue lines represent the neutral (white) wires - which wouldn't show up well if they were white lines :) The selection of whether to use red or black to connect the light and fan hot leads between the inside 3-way switches and the fixture is arbitrary - pick one that works. As you can see, the white wire in the 14/3 between the 3-way switches is the neutral. Assignment of the other four wires is also somewhat arbitrary, just be sure you have the switches connected in matched pairs.

Nope, you can't continue off the fan because you won't have always-hot and neutral there. Keep in mind circuits are a tree topology, not a vine. Branch off switch 1, then do one of two things:

Whichever is easier / most economical of cable / allows for continued extension of the circuit.

Not the answer you're looking for? Browse other questions tagged electrical wiring switch receptacle ceiling-fan or ask your own question.