Why would one breaker trip more than another under the same load?

I have three circuits in my shop, each dedicated to powering 2 duplex 110V receptacles. The circuits originate from a 100A subpanel inside the shop.

Funny thing is - the 20A circuit will sometimes trip using tools that might draw only 8 or 9 amps max, while I hardly ever trip the 15A circuits with the same tools, or even when using a tool that will draw 15A max (briefly, like a table saw).

What could cause this? I have a multimeter - Can it help me infer something here?

Get another 20A breaker and replace one of the 15A breakers with it. There is a special exception in Code which allows 20A breakers to be used on circuits where

A 20A circuit can't feed only this. 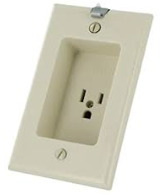 One of these is fine.

FYI, there's also a UL rule that 15A receptacles must be good for 20A passthru. That applies to most GFCIs too.

Now with two 20A breakers in the panel, you can experiment more and get back to us.

Also make sure the breakers actually are the same make/model as the panel -- the simple way here is to make sure your panel brand equals your breaker brand. Wrong brands/types will seem to snap in, but don't properly mate and will arc and burn up the buses.

This isn't scamming you, we're not name-brand-obsessed, if you want to use a GM/Delco brand brake pad made for an F150 on your F150, have at. That's just not very common with breakers.

It's possible that you have a bad connection somewhere. A loose or bad connection is a resistance and creates a voltage drop, so as soon as you put a load on it, the current flow makes the VD worse. This increases the current drawn by that load until the breaker trips. That first GFCI receptacle would be the first place I'd look.

It's also (albeit more remotely) possible that when installing your wiring you smashed down too hard on a staple, or when doing other work right after that, a screw or nail has pierced the insulation and is causing a high resistance short. So not enough current flow to trip the breaker by itself, but combined with your load, it is. This is what "Arc Fault Circuit Breakers" are intended to prevent, because it happens more than most people realize. If you don't have a way of checking to see if current is flowing in that wire when nothing is plugged into it, you might want to call an electrician. An "arcing fault" like that can smolder for a long time and then suddenly catch fire inside of the wall somewhere.

Buy a new 20A breaker. Swap it in. If the problem goes away, it's the breaker. Take the bad one back, explain that it is defective, tell them when you bought it, and that you would expect breakers to last longer than that. and that you have already bought the replacement. If it doesn't go away swap again, and take the new one back.

Verify the load part 1. Use a clip around amp meter and see if there is a load on the circuit when you aren't doing anything.

Verify the load part 2. Make a short (1 foot) extension cord with separate wires so that you can use your clip around amp meter. See how much your device draws on startup.

My suspicion is that you have a fast trip breaker, and that the start up current of one of your devices is enough to set it off. Check the part number on the breaker then look up the specs. Edit: I'm informed that such don't exist in the North American Market. So the breaker is either defective, or something else is wrong.

If you do have a fast trip breaker, then you can attempt to return it as 'wrong item for task' Depending on store policy they may or may not accept the exchange.

3
Is a duplex outlet's max amperage rating for each socket or the whole unit?
16
Why is it safe to use 15 A receptacles on a 20 A circuit?
1
Will a 15A receptacle on a 20A circuit fail if I draw over 15A combined from each outlet?
3
What size GFCI and receptacles on 20A circuit?
0
Bath and Closet electric wiring what type of wire and how many circuits?
1
Can I install 120v and 240v receptacles behind the same two-pole breaker?
21
Why does US Code not allow a 15A single receptacle on a 20A circuit?
2
Moved compressor from one outlet to another. Now it trips the breaker. Same circuit. Different outlet. Why?
22
Is this correct? Welder suggests 15A outlet on 20A breaker, or 20A outlet on 30A breaker
0
Is there a 30A receptacle which will accept "regular" 5-15 and 5-20 plugs?