What is the proper method to install a "close" metal pipe nipple?

A close pipe nipple is designed so that when it is installed there is very little or no gap between the two fittings which attach to either end.

What is the proper method to install one of these? Could be black iron, brass, etc.

Here are the issues I wonder about:

Example of a close nipple: 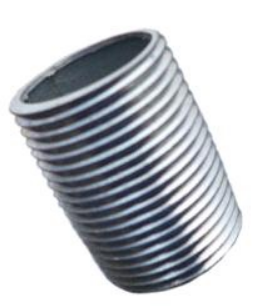 Note that the threads on a nipple like this should have a diameter taper on each end. This causes the fitting to get progressively tighter as each end is screwed into its mating part. When tightening the two joints simultaneously the two tapered joints will turn till one gets tighter than the other. At that point the looser one will then tighten up till it catches up and becomes similar tight to the other joint. Eventually you will achieve the necessary thread engagement with each end of the nipple.

You can use an internal pipe wrench to tighten the close or a short tapered nipple into the first fitting, then screw on the second fitting at the other end.

All the negative thoughts are why "all thread nipples" or "close nipples" as they are sometimes called are banned by certain industries. since there is no actual plain, not threaded pipe in the center of the fitting, you do not know how much pipe material is inserted into either fitting making it a potential danger. Natural gas suppliers in my area of the country will not approve a gas supply if an "all thread nipple" is used. Due to their make up they will be the first fitting to cause a leak. So, to answer yiur question, I never used them and neither should you. There is always an alternative.

The correct installation technique for a close nipple is to apply thread sealant and then thread the nipple into both fittings by hand by 2 or more turn before tightening using wrenches on the fittings, never on the nipple. The question does seem to understand that using a wrench on a nipple could be wrong, which is an understatement.

in re: "nipples with no plain pipe segment are bad/prohibited" etc. This nonsense is for the convenience of know-nothing inspectors, and doesn't actually prevent the danger it seeks to ameliorate. All nipples, pipe, and fittings except for the type called "rigid conduit" which is for electrical use only, are threaded with a "tapered" thread. The threads are conically tapered for a cone-in-cone wedge fit that becomes progressively tighter. There is no danger of one side sinking into the fitting and the other side remaining with just a couple of turns of engagement. It requires only minimal competence to distinguish between a connection make with a tapered thread and a connection made with a non-tapered aka "running" thread. The expectation that inspectors and workmen are unable to distinguish between the says as much as needs to be said.

[NB: rigid electrical conduit look like schedule 40 galvanized iron (actually its been steel for more than a century) pipe and fittings may be made using a non-tapered thread. electrical conduit joints aren't required to seal against pressure, and generally don't.]

Thread sealant generally mean using a good "pipe dope" e.g. Rectorseal No 5. Teflon tape is less messy to use but much more likely to produce a leaky joint. The tape must remain in place well enough to undergo "plastic flow" deforming itself to fill the non-conforming parts of the joint. It always shreds and stays at the leading edge of the pipe to some extent. Never use Teflon tape for fuel oil lines, the shredicles can (will) plug up the fuel oil pump and nozzle strainer. Specialty thread sealant products for specific fluids like liquid fuels and refrigerants often also seal water and natural gas, (see product labeling) . Their use is uncommon because of their high cost. Be certain the product is safety agency listed for the intended use when applicable.

Not the answer you're looking for? Browse other questions tagged plumbing pipe fitting or ask your own question.