Taco makes two variants of zone valves - one type for general hydronic use, and another type marketed especially for geothermal use.

What is the difference in valves that particularly suits them for one application or the other?

All the manufacturer's literature I can find (so far) basically reads identically for both products. But the geothermal variants are more expensive. Having looked at samples myself, I don't see any superficially obvious differences. The actual valve portions appear to be potentially identical; but there could be some differences in the actuators ether mechanically or electronically which would not be obvious.

(Perhaps other manufacturers have a similar offering, I just happen to be a little familiar with Taco's).

Assuming there are substantive differences, in a pinch could one be used in the "wrong" application successfully? (e.g., using a regular hydronic in a geothermal system, or vice-versa).

Note - both samples I've seen are normally closed, so apparently the answer is not that one is normally open. 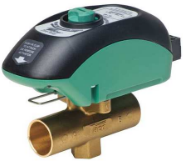 This comment pertains specifically to Taco valves, it may or may not be true of other valves intended for geothermal applications. Not all geo systems are open loop.

(From Q&A section at this page.)

This was also confirmed by information I received directly from a manufacturer in reply to asking this same question:

A standard hydronic valve is made of free machining brass. When exposed to oxygen, it will dezincify. (The oxygen pulls the zinc out of the brass making it brittle and porous.) A geothermal specific valve uses brass that can handle open systems (O2) and will not dezincify. The bottom line is that the normal hydronic valves are not made for open systems.

Not the answer you're looking for? Browse other questions tagged valve hydronic zoned-heating or ask your own question.

1
Can I install thermostatic radiator valves on a hydronic heating system?
1
Are hydronic systems set up as loops or ladders, and how can I tell the difference?
1
Hydronic kickspace heater on same zone as cast iron radiators?
0
What are normally-open hydronic zone valves used for?
0
HZ432 and no heat in one zone
0
What are the steps to drain and refill zone for zone valve replacement?
0
Splitting a hydronic zone. Zone valves or separate circulator pump?
0
Why does my radiant heater have multiple zone valves?