What is the purpose of power going into a Phone Receptacle?

It is my understanding that the following photo contains a phone jack (old style 4 prong) to the left and a standard nema-15r outlet to the right. 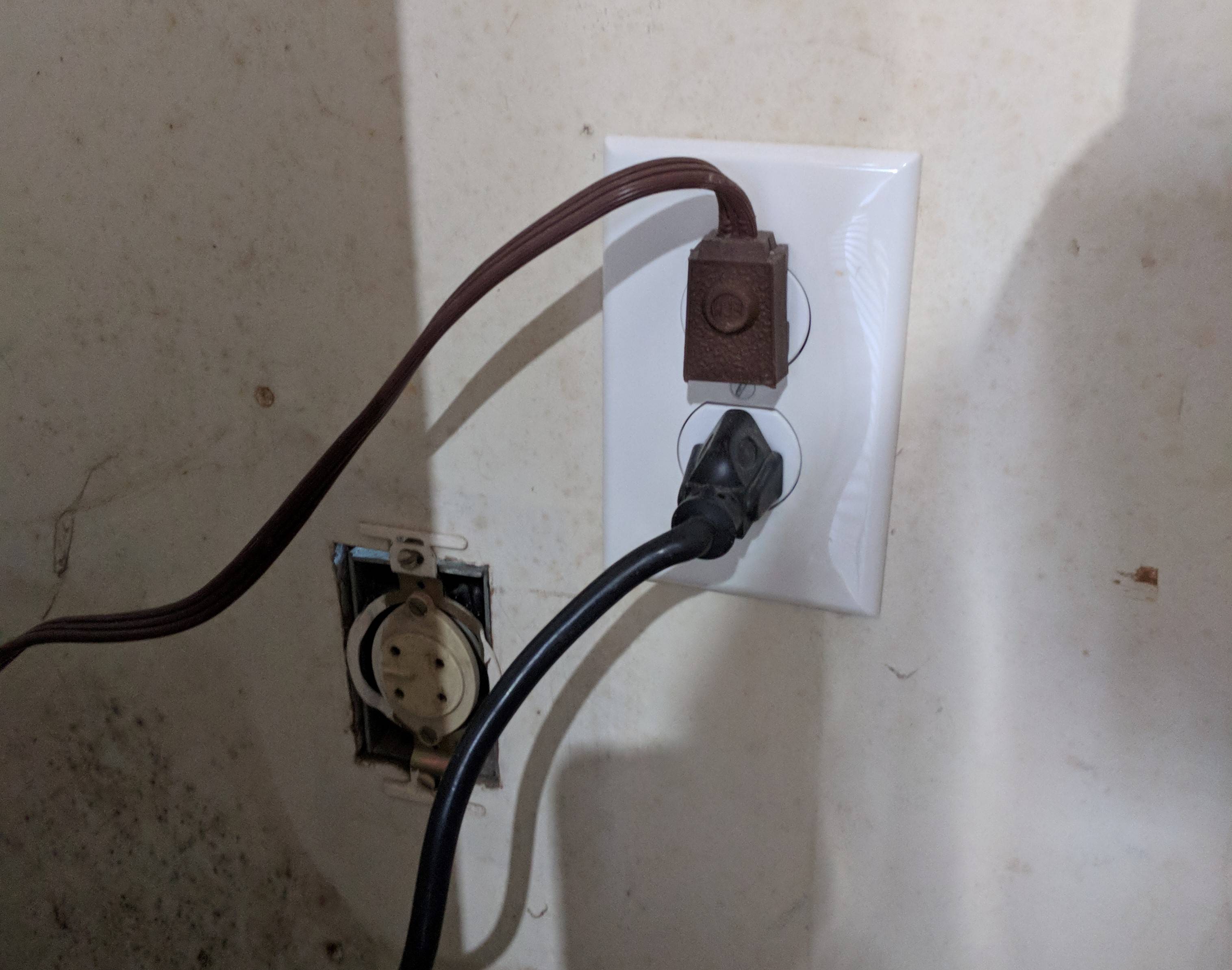 Well, we had found some mold in our basement under some old wood paneling and when I removed the old Sheetrock I noticed Romex (that is live) going into the box. My question is, what would be the purpose of this? Obviously, i'm going to cut power at the breaker and remove this... but why would someone do this in the first place? Is this not a phone jack as I'd assumed? 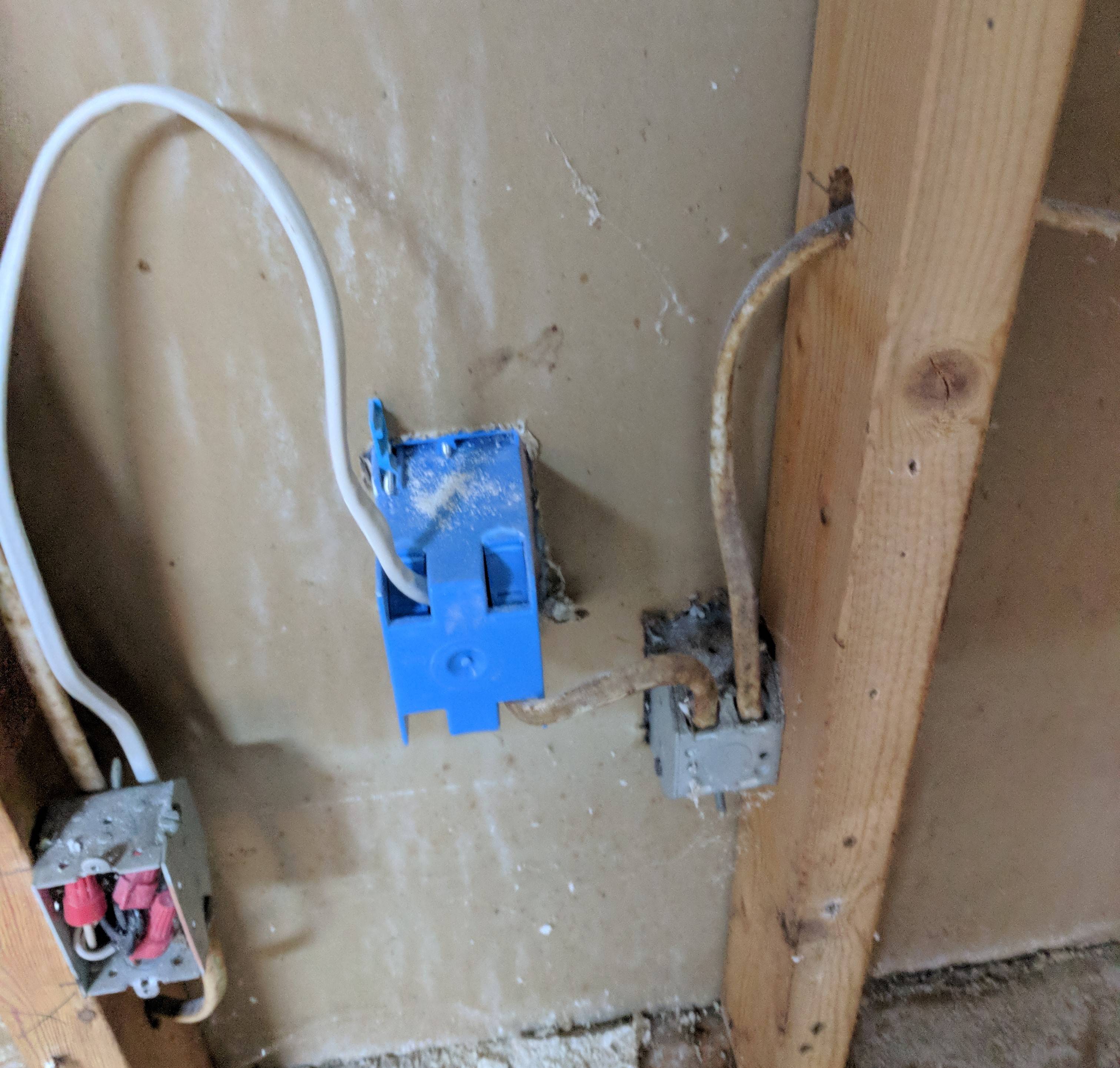 From your back side picture it is apparent that no small gauge low voltage wiring goes to the box with the four prong plug. So unlikely that the plug was used for wired phone service at any time in the near history.

It is almost sure that someone at one time wanted to power some ill conceived device with power through a four prong plug. If you open up that box you will undoubtedly find that some pins on that plug are wired into the power circuit that passes through that electrical box.

Sometimes it is just hard to understand some of the schemes that folks will dream up and cobble together, whether it is safe or not.

Originally the phone box was a power receptacle and the blue box wasn't there.

Look at the short run of old Romex between the phone box and the blue box. That run used to go all the way to the other steel box, but the cable had a problem. So the last guy cut a hole for access and installed the blue box as a splice point. (keep in mind the drywall was installed; he was reaching through.)

Why he moved the socket to the blue box and put a phone box in the old location - I have no idea. It is illegal to put a phone jack there.

Fix it the way they intended

They gave you enough length in the new Romex for the metal boxes to connect to each other - they just didn't have the access to complete the job. I would convert the "phone" box back to a receptacle box, and deprecate the blue old-work box, as the way it's mounted is a compromise and not particularly strong.

Now the two metal boxes are your receptacle boxes again. They are properly anchored to the joist, so if you are wrestling a stiff plug, there's no worries of tearing the box out of the drywall. Metal boxes don't burn or melt, and can be grounded.

If the wiring is not already grounded, now is the time to retrofit grounds to all the boxes (except the blue one obviously.) In 2014 they greatly relaxed the rules on retrofitting grounds.

Not the answer you're looking for? Browse other questions tagged electrical receptacle phone-wiring or ask your own question.

9
Why is there so much metal-clad wiring in my house?
4
Buzz in the phone
4
Why was the ground for this fluorescent fixture not connected to the ballast?
2
What's happened to this light fixture?
2
wiring - is this feeding other circuits or all switches?
0
Code requirements for adhering wall light to electrical box - does the light need to be attached to the box?
4
Help with sauna heater wiring diagram
7
How do I wire a modern 240V 3 prong range to a 250V 50A 3 prong outlet?
1
Transformer going into receptacle obstructed by board behind it
2
Wiring for EV chargers in detached garage