What do I need to remove and replace this recessed faucet aerator?

I've got a bathroom sink faucet with a recessed (cache) aerator that needs to be cleaned or replaced, but seems to require a special tool to remove it. There is no obvious branding on the faucet, so I don't know what removal tool to ask or look for.

I've tried some of the "standard" removal keys they sell at the big box stores, but they don't fit. Those keys seem to be a little too big and you can tell that the tooth pattern is not quite right.

I've included pictures of the faucet, the aerator, and a key that does not fit.

Wondering if anyone knows what kit or tool I need to remove and replace this aerator? 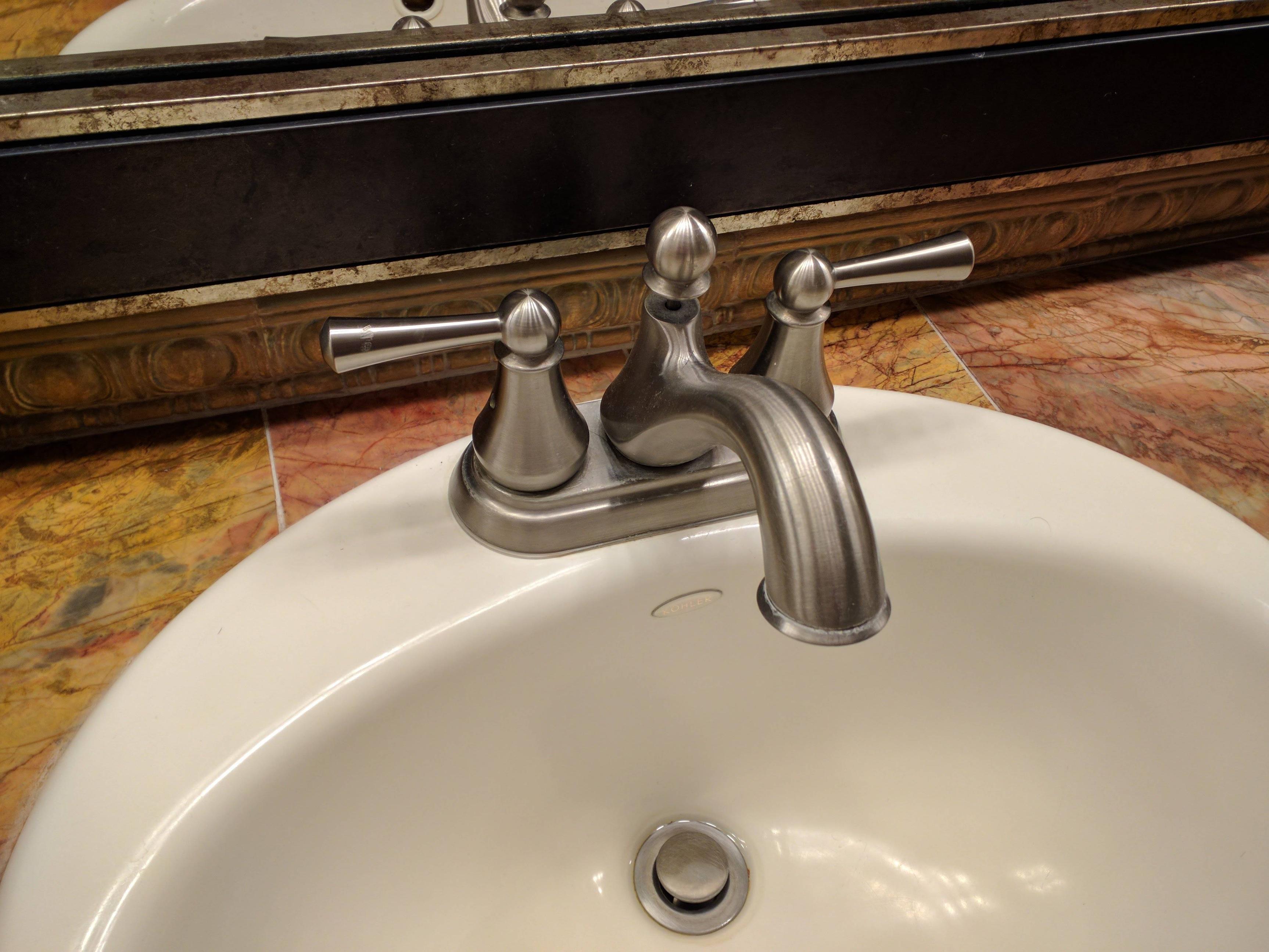 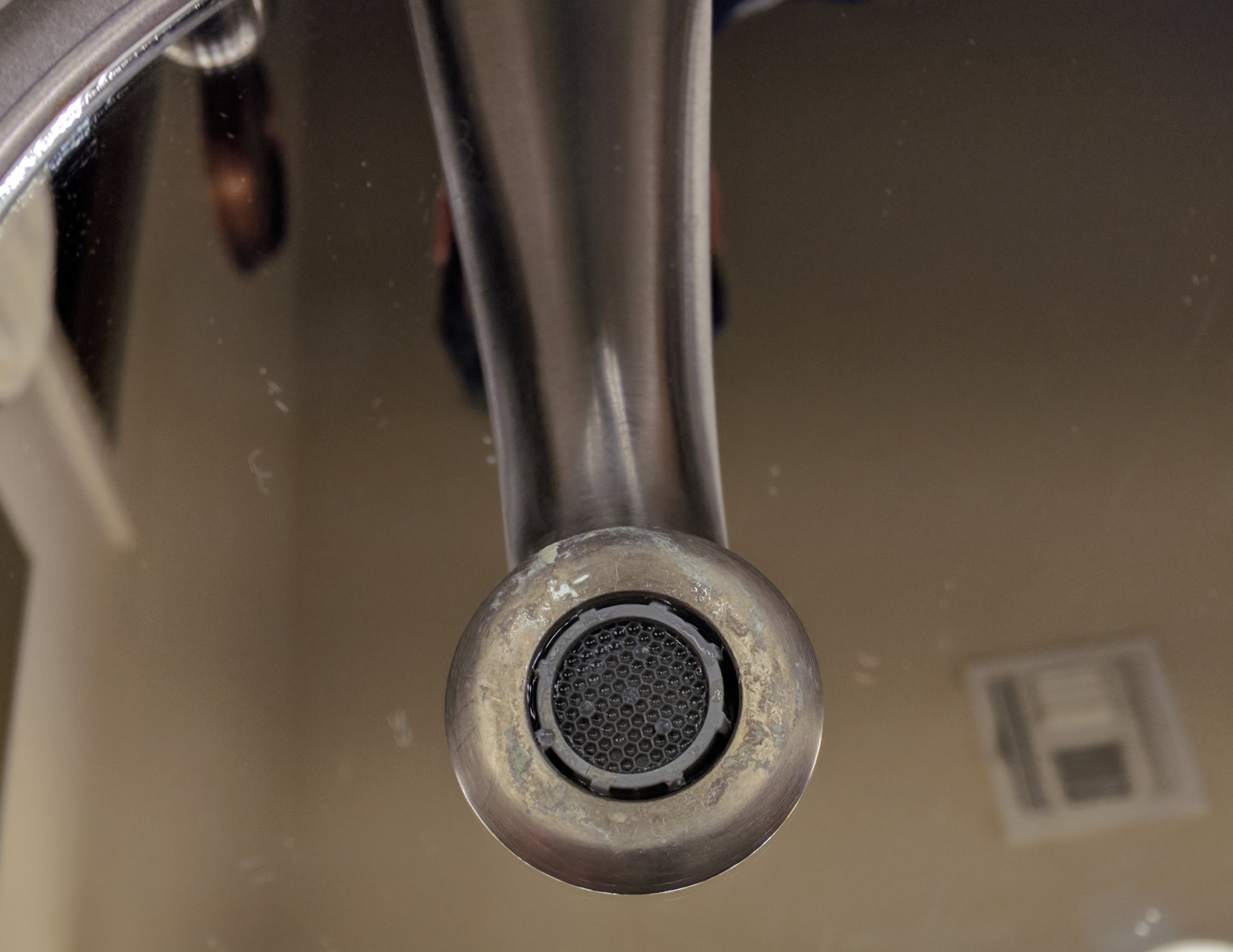 Example of key that did not work: 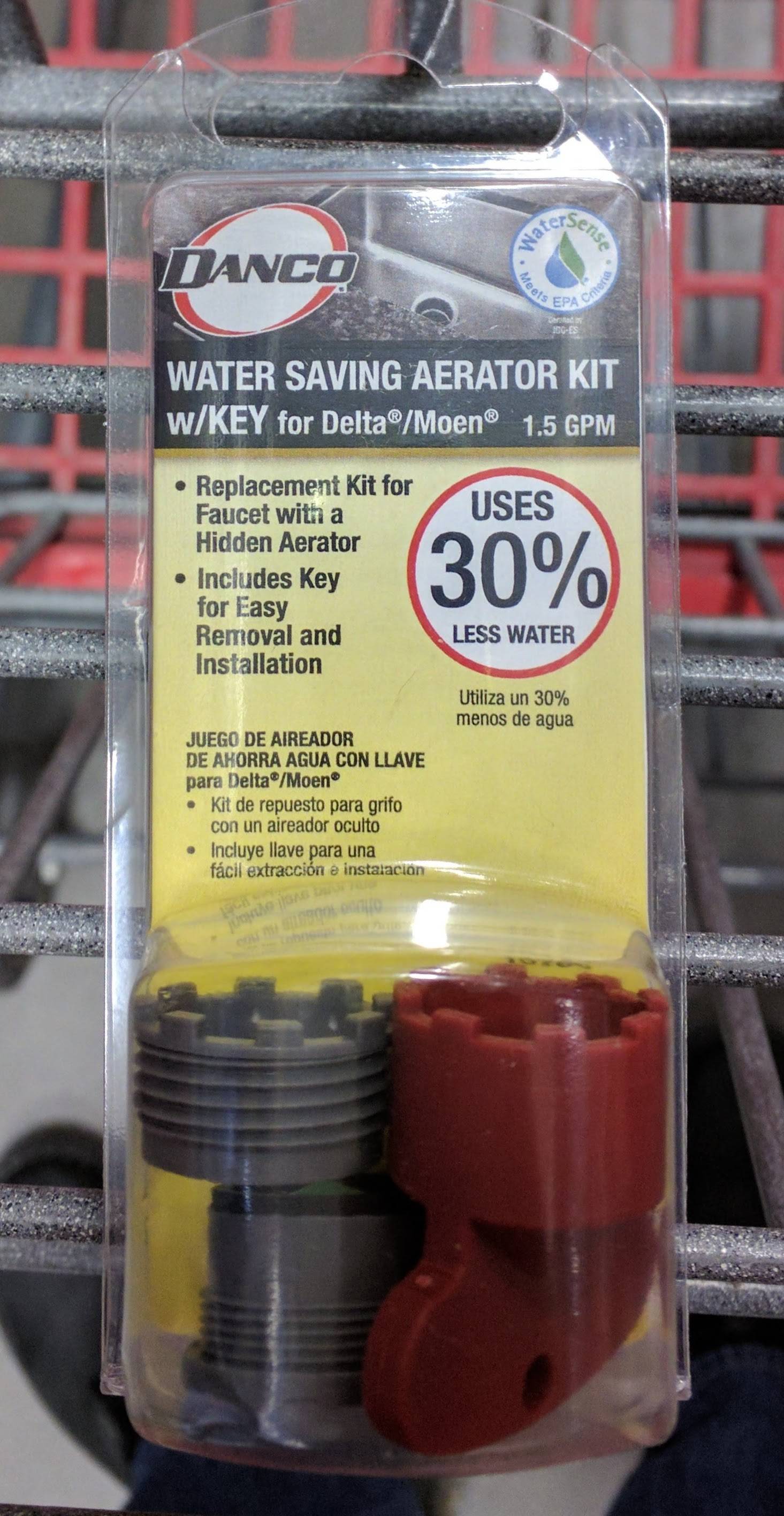 Thanks to @Alaska-man, it turns out the tip of the faucet itself was threaded and, once removed, gave me direct access to the aerator (which is not itself threaded).
Don't know why I didn't think to to try this. Perhaps because the visible part of the aerator had grooves that convinced me that it was itself threaded.

Images of tip and aerator removed. Also, it's apparently a Delta faucet (discovered after removing tip and observing lettering on underside). 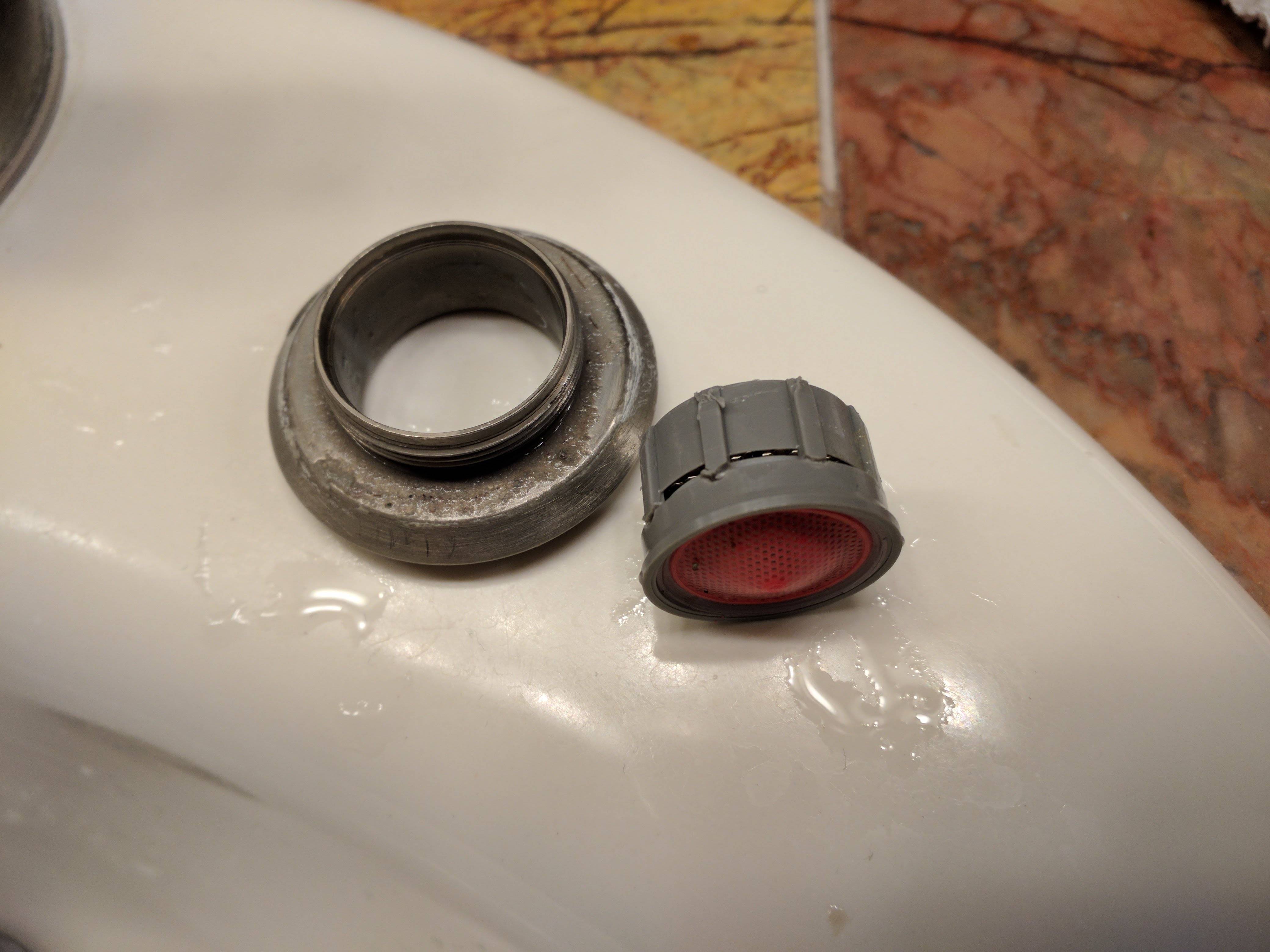 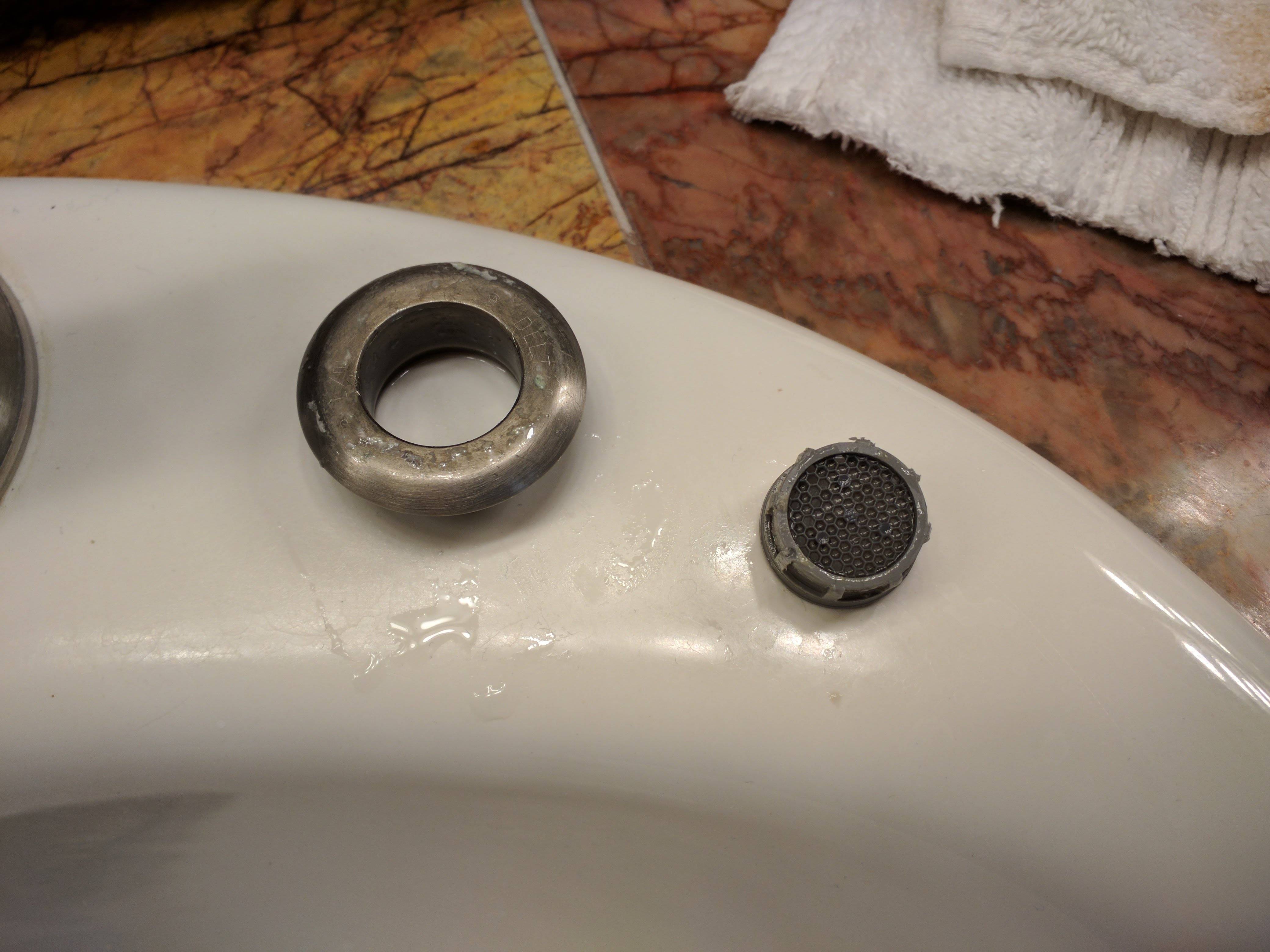 The flared part of the faucet, the ring around the end, should turn. It should be threaded and holding the the aerator in.

Meaning the the aerator is not threaded in but is being held in by a threaded retention ring. ??

I used a pair of needle nosed pliers. Slid the ends into the tiny plastic indents and turned. Worked like a charm.

I used to back side of a caliper. It's adjustable so it'll fit any diameter aerator. Very simple and it worked beautifully.

This looks like a Pfister Faucet but can't be sure - you would need to remove it and look underneath for the make / model information. Just looking at Pfister with the outside crown on the aerator - I am pretty sure that is what you have.

A Pair of Snap Ring pliers for small snap rings would allow you to remove it - a 90 or 60 degree bend at the nose would be very helpful. That is what I would use to remove this given I did not have a tool - I might look to order one after I removed it though.

Kohler looks to be the same style as the Pfister I have seen so it is possible this is what you need Kohler 1130269 Aerator Tool .

One can use a paperclip to unscrew it if you don't have the tools. Bend the paperclip so you can stick one end against one of the teeth and push. Once the teeth are protruded, you can use your fingernail against the teeth to remove it.

2
Can't get threaded connector all the way into shower faucet. Do they need to go all the way?
3
How to get a stuck Moen faucet cartridge out?
2
How to remove the handle on my Delta faucet?
0
Adapting onto a Price-Pfister bathroom sink faucet with hidden Aerator
1
Trying to replace a Trailer's kitchen faucet
0
How to replace this weird faucet aerator?
4
What can I use to determine the proper size of faucet aerator to buy to replace the existing ones in my american standard faucet?
0
Removing Moen kitchen faucet aerator
0
How do I remove the aerator on a Kohler Artifacts faucet