Question1: So are any small circular blades(Ferrous metal cutting) and mandrel available, which can be fitted to an electric drill?

Question2: Is there any kind of adapter/attachment which can change the angle of the drill? 0-90 degrees? Basically converting it to a rotary cutter.

This is a really bad idea.

Out of curiosity, have you done much metalworking previously?

Let's assume you've got a nice circular saw blade with teeth. Here's what will, and yes, I mean will, happen. You'll be holding the drill at an uncomfortable angle to try and apply pressure in the direction of the cut. The teeth will bite into the metal and it will yank the drill up and out of your hand. Thankfully, the drill trigger is something of a deadman switch so it will stop and you'll be frustrated.

Possibility two, you have a cutoff wheel, which is an abrasive disc meant for this purpose. You're still stuck holding the drill in an awkward way, the wheel can still bite, and you're basically no closer to your goal.

How to do this properly

If you need portability and it must be a handheld tool, get yourself a 4" or 6" angle grinder with cutoff wheels.

This will allow you to cut through most ferrous and some other metals.

If it doesn't need to be handheld, then you can get a chop saw and accomplish the same task, but with better fixturing. 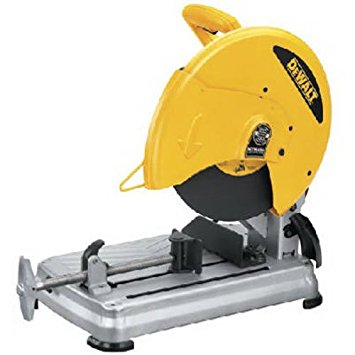 There are many other ways to cut metal, but a drill should only ever be used for drilling.

I forgot to mention this earlier, but drill chucks are designed for axial loads. You'd be subjecting it to large radial loads, which would quickly destroy the bearings, likely the motor, and certainly render the drill useless.

Not the answer you're looking for? Browse other questions tagged drill metal cutting or ask your own question.

9
Should I buy a drill or an electric screwdriver?
0
How do I drill through a shaped tube with a handheld drill?
3
How to drill steel with large bit outside the drill press
0
cutting sheet metal on K3 board
1
Cutting wire/cable in close quarters
2
When drilling metal, should I start with a smaller bit before using a larger bit?
3
How to drill a 0.75" hole in metal
2
Bosch Cordless Drill Keeps Cutting Out
1
Does a small bolt cutter exist which tensions with a wrench?