Any reason not to ground the sheathing of MX wire?

Having recently bought an older house (c1943) I am doing a little work on the place. While rewiring a light switch I noted that there is newer Romex wiring from the distribution panel to the switch, but older BX (2-conductors) wiring from the switch to the light fixture.

I now need to put in a junction box nearby to join the BX and a new length of Romex (which runs to a different appliance). This gives me a chance to connect the sheathing of the BX to the Romex ground wire (which is grounded at the distribution panel). Is there any reason not to do so?

TOTALLY DIFFERENT ANSWER FROM THE ORIGINAL:

The original answer was not complete and had some misunderstandings. I hope to clarify here.

First off, there are many types of armored cable, most of which are colloquially called "BX". By "older BX" I assume you mean something like the wire at the bottom of this image: 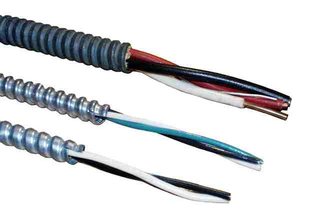 Two conductors, no ground wire, no bonding strip. This kind of wire is an older design predating the grounding requirement. If the wire is original to the house, it was not designed to have the armor grounded (because it's 20 years older than the NEC grounding requirement itself). It's still available (hence the newer PVC insulation and overall new condition of the wire in the picture) because there are still situations in which it can be used safely (and jurisdictions that don't care); however, your situation and location probably falls under neither of those.

It can be dangerous to use the armor of older, "non-bonded" BX cable as a ground connection because:

It's possible, and it may even be likely, that you'll never have a problem, but electrical codes are extremely pessimistic for a reason. When "possible" takes another job on Murphy's side, and "likely" don't want to come in to work that day, that's the day you have a problem. 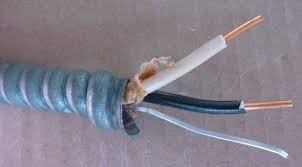 Notice the bare wire. This type of cable is designed specifically to have its armor and this "bonding strip" form the ground path in combination. You do still have to be careful about what you connect it to:

This all just means you should be careful when installing it, to make sure that you don't abuse the armor or create a galvanic cell in your J-box. You also must not install this wire in any location where water could be an issue; instead, you should use a Type MC cable with a PVC outer jacket. However, if installed properly, this type of wire is perfectly safe.

Looking at the first image again, the middle cable is an example of non-bonded, grounded BX, known in the NEC as type MC (though newer MC has an extra PVC jacket between the conductors and armor; it's basically armored Romex). Because it doesn't have a bonding strip, the armor of this cable should not be used as ground. Instead, the green wire (in the image it's a very blue-green) should be used as the ground connection. MC severs these two responsibilities; the armor is there to take abuse, the ground is there to add electrical safety to the circuit.

6
What is the purpose of the “grounding” tab/wire on a 3-prong to 2-prong adapter?

1
Why does my fluorescent ceiling fixture trip the GFCI sometimes?
0
Trying to understand wiring to old heat lamp in bathroom
0
Convert bathroom exhaust fan/light combo to light only with 3 way switches
0
Light Fixture Junction Box with Remote Switch
0
Could it be that smart light fixtures are the future and not smart switches? At least for retrofits?
0
Apartment using ground wire as neutral
0
Moving main service breaker panel lower on wall exposes feeder wires non-sheathed
1
How to wire 4 nm into 2 separate light switches and 2 lights?
1
Rewiring light fixture and switch to bring neutral line to the switch: one 12/3 switch-leg vs two 12/2 wire to bring power to switch?
0
Outlet grounded by conduit - how do I add a second outlet with Romex?