Can I have dimmable LEDs in a corded lamp?

For a couple of bedside/reading lamps I want to use LEDs, but even the dimmest bulbs I've seen in the shops are about 250lm and still too bright for the purpose.

So I've come to consider a dimmer. The lamps are corded with the sockets well out of reach, so I'd like to install an inline dimmer on the cords like this one for example.

But I've been told you can't get trailing edge inline dimmers, so we're back to incandescent or halogen bulbs, which I'd rather avoid.

I've also seen LED bulbs with built in dimmers which can be operated by remote, but the only E14 type I've found is online and they look a bit shoddy.

So my question: What's a good solution for dimmable LEDs in a corded lamp?

Edit: Seems you can get inline LED dimmers.

I don't think you need to consider leading or trailing edge at all. Incandescent dimmers are leading edge and government energy regulations (e.g. Energy Star) lead to broad compatibility with them.

Speaking for US products, personally, I have a Cree bulb running on a Lutron C*L (designed for CFL/LED compatibility) plug-in dimmer just fine. You can see from this list that even CFL/LED dimmers are leading edge, yet they are compatible.

I suggest checking the compatibility lists, looking for a LED marketed plug-in dimmer, and trying it out.

There are plug-in units for outlets that utilize a wireless control and can dim compatible LED lamps. 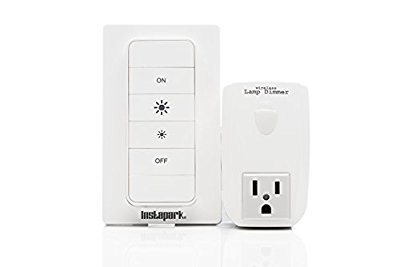 Images and links for illustration only, not an endorsement of goods or sources.

They make reducers which allow you to convert an E14 base into a Candelabra (American E12) base or presumably European E11. There are legions of LED products for E12, and they get as dim as night lights - I'd imagine the same for E11.

Does the lamp have a bezel or shade? If so, you can put cinematic gels inside the shade. A light gray filter will do - add layers for more attenuation.

This used to have a tendency to melt or blanche the gel over the long term due to incandescent's heat and UV, but that's not a big issue on LEDs.

3
What type of bulbs dim to lowest setting?
19
What should I do to increase the dimming range of LED bulbs?
1
Why do LED lights with a dimmer stay dim and won't go bright again?
3
Can I put dimmable LED bulbs in a ceiling fan fixture and wire it to a dimmer switch marked LED compatible?
1
Is it safe to mix LEDs and incandescents in a chandelier?
2
LEDs in a multi-bulb fixture only dim when installed alongside a single 60W incandescent bulb
0
Can I tell whether a LED driver/bulbs are dimmable without damaging them?
1
Do LED dimmers work with non-LED bulbs?
0
Switching off dimmable LED flashes then switches back on