On my kitchen ceiling, there are two light boxes controlled (I hope?) by one dimmer switch. The boxes are connected to the far wall (opposite the switch) by a conduit that runs along the ceiling; however, some wires stick out directly from the ceiling, not from the conduit.

Box A only had two loose (capped) wires: a black and a white. I tied them to the respective black & white wires of a pendant fixture, and all was well. That light is now controlled by the dimmer switch exactly as I'd expect. For the sake of completeness, I'll note:

Meanwhile, over in Box B, I found a total of 6 wires, which were joined together into 3 pigtails. 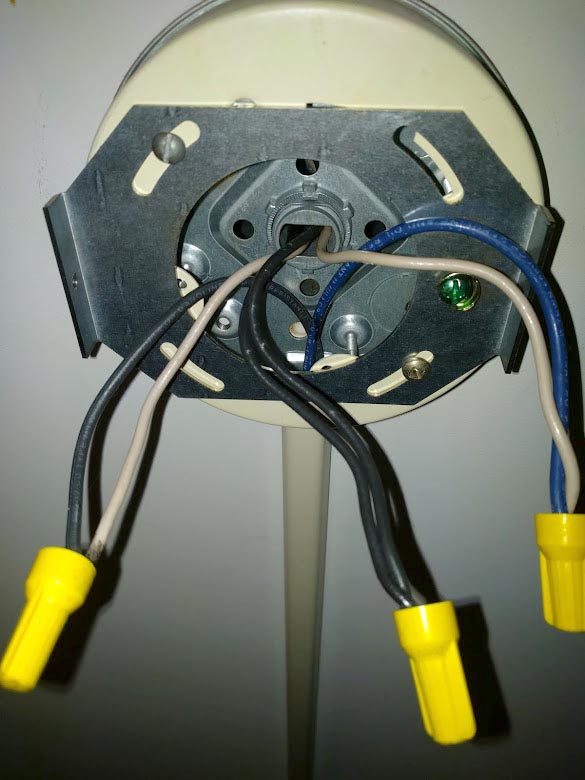 Edit: here's a zoomed out photo 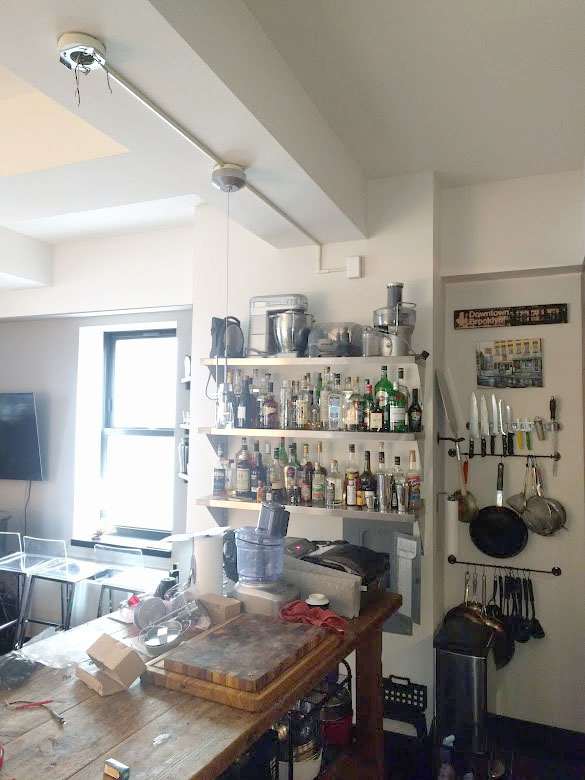 ^^ From left to right, you can see the wires coming out of box B, the pendant successfully hanging from box A, and the breaker panel underneath the shelves on the far wall. I separated the box B wires for testing (i.e. the pigtails seen in the closeup photo above are no longer connected), so the pendant obviously does not light up anymore. 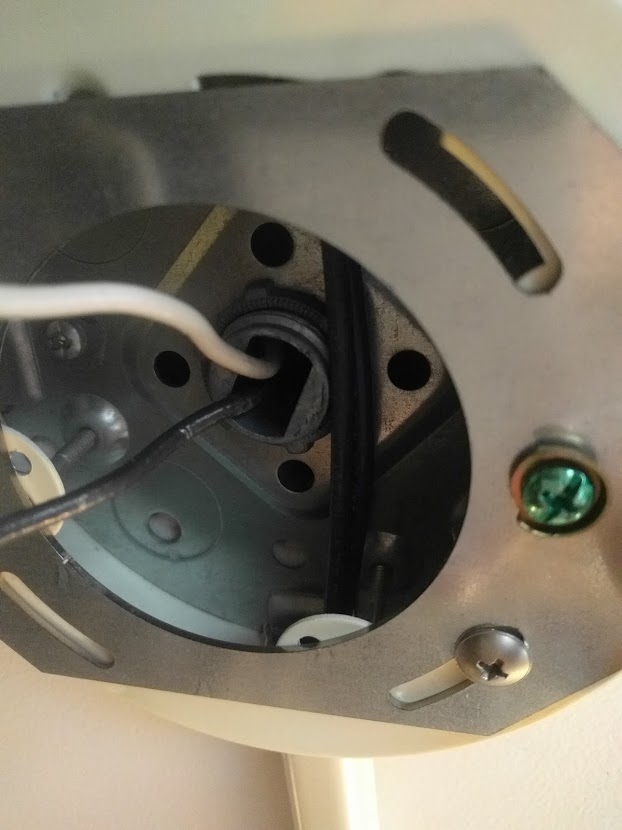 ^^ Here you can see the single black and white wires coming out of the ceiling, which I'd previously wired into a pendant, and also the conjoined pair of wires (black+grey) running thru the conduit. As for continuity:

The main discovery is that with better lighting, I can see that the dark wire from Box B's first pigtail is ever so slightly lighter than the other two black wires. I've relabeled it "grey" above, since it appears to be grounded.

Well, here's what I think you've got. You know that the lamp in Box A works and once you traced the wires it was easy to chase it back from that.

The wiremold surface conduit brings power (always-hot and neutral) into the system.

Nut 3 is neutral, using (very bizarrely) blue for neutral. Which is the standard in Europe (though they prefer a robin's egg blue) - not legal in North America (white or gray please).

Oddball colors like that are possible in conduit (such as this surface mount) since they are THHN individual wires. Possibly the other wires are multiconductor cable (NM Romex or metallic AC) always black-white.

Nut 1 is always-hot. Note that it's using a white wire in the switch loop, which is actually a Code requirement when using multiconductor cable like NM or AC however the wire must be taped to identify it as a hot.

In this diagram, I go well past the mandatory markings to mark every wire with "tape" whose native color doesn't match its function. All these markings are legal except the blue wire - neutrals must be natively white or gray (even in cable), and blue here is a code violation that isn't fixed by marking it.

My guess is before the condoization, it was powered at the light switch off a circuit that served other areas of the office which are now part of other dwelling units. That breaker would've been in someone else's condo, which violates Code. This work was done competently by an old-head who knew what he was doing... except the blue wire! Perhaps a European immigrant...

As for grounding, I would pop the cover off the "surface conduit starter box" over on the right wall, and see what's behind it. If you see a steel junction box with tubular conduit feeding down to the panel, that EMT or IMC or rigid conduit is a valid grounding path. The back of the box will have a hole tapped #10-32, I'd get a ground screw (they sell them at electrical supply by the one, or big-box by the ten, they're even green so you don't mix them up with general hardware) and some #12 bare ground wire, and bring it to each of the junction boxes via the Wiremold surface conduit.

1
How to connect my new light fixture that has 2 (+ground) wires to the ceiling box that has many?
1
Replacing pendant lights and have a question on all the ceiling box wires
2
Wiring a ceiling fan with light to a box which has 3 cables running into it(white, black, red, and bare)
0
Electrical wiring in ceiling junction box
12
Wiring IKEA light fixture into old fixture
1
Ceiling fan with light - electrical box has two cables, one with a red wire
0
Wiring Light Fixture with 2 Sockets into Junction Box with 2 White, 2 Black, and 1 Red Wire
1
Problem: Knob & Tube + conduit together in ceiling junction box
1
Understanding wires inside junction box
2
Ceiling electrical box wires -trying to install a light fixture