How would you attach an interior wooden wall to a metal building?

Didn't see this question from my searches but I'm unsure if I have my terminology incorrect. I've been looking to add some finished, air controlled, rooms to a metal building with beams upon my research I've seen multiple ways to attach a wood frame on the inside: 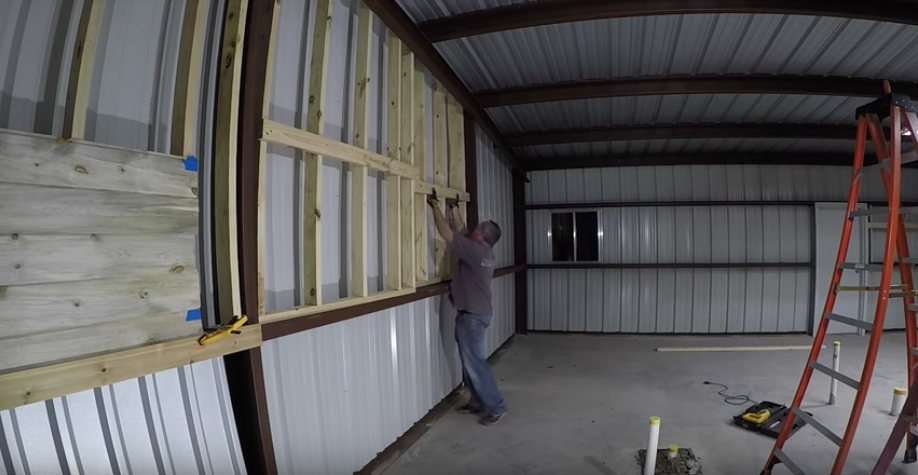 from: 2x4 Wall Framing and Questions on Interior wall treatment that seems to place walls in between the beams and www.WilsonworksConstruction.com - Wall Framing (which is a bad video) so:

from: Frame up of New Office in metal building showing the framing from outside of the beam. If I plan to run electrical and insulation which process is correct and how would you properly fasten the wooden interior walls to the metal beams? Is there a special way to do this? I'm familiar with installing interior walls in a basement and to concrete floor with a Ramset Gun but I don't know if this is the same process.

I would not choose the path in your first photo unless you verified with the company that engineered the steel building that the additional dead load from the wood framing, drywall and what ever you might use the wall to support is adequate. I would think it was not engineered for the load and could cause problems later.

So, second photo, the wall dead load is supported by the floor. Hopefully the slab is not really thin and poorly reinforced. In that photo from the height of the building, I am guessing the floor was reinforced poured with the intent for light-industrial taking place in there. If you are doing free standing walls, avoid powder actuated fasteners, they have very poor pull-out resistance. Use a wedge anchor or a sleeve anchor.

To fasten the walls to the steel posts of the metal building use a #3 point, washer hex head, self-drilling screws. You can find them at Fastenal. Space them 1-1/4" from the stud edges and in an alternating pattern every 15"-18". I personally also like to use extra-thick fender washers, sometimes called heavy washers to increase the pull-through resistance. A premium poly-urethane construction adhesive would increase the holding power considerably.

I would insulate the steel wall first with rigid foam insulation panels to fill the depth. I would then use fiberglass batt in the studs. If this is commercial or industrial, your electrical might be required to be in conduit or MC cable, Codes are not the same everywhere. MC can be run though holes board in the studs similar to NM cable.

Not the answer you're looking for? Browse other questions tagged walls wood interior or ask your own question.

2
How do you frame a wall around existing pipes and ducting?
5
How can I frame this area of my basement wall around my water main?
1
What does a novice DIY'er need to know before building a wall higher than 8' (14.5' feet to be exact)?
5
How would you fix this wooden cottage's leaky walls?
2
Attach net/hammock to interior walls
0
How to build a sliding wall section
3
What is longest distance without attaching a top plate of interior wall
2
Semi-permanent installation of 4x8 wall paneling suggestions?
2
How does framing a very tall non-structural wall differ from framing a standard height non-structural wall?