Why do my rooms heat to different temperatures?

Any advise would be appreciated.

We set our thermostat to 72 and I've attached a picture of the layout and temperatures in each room.

The room that has the thermostat in it faces east, but I've never seen direct sunlight hit the thermostat. And that room its self never seems to make it to the set point. 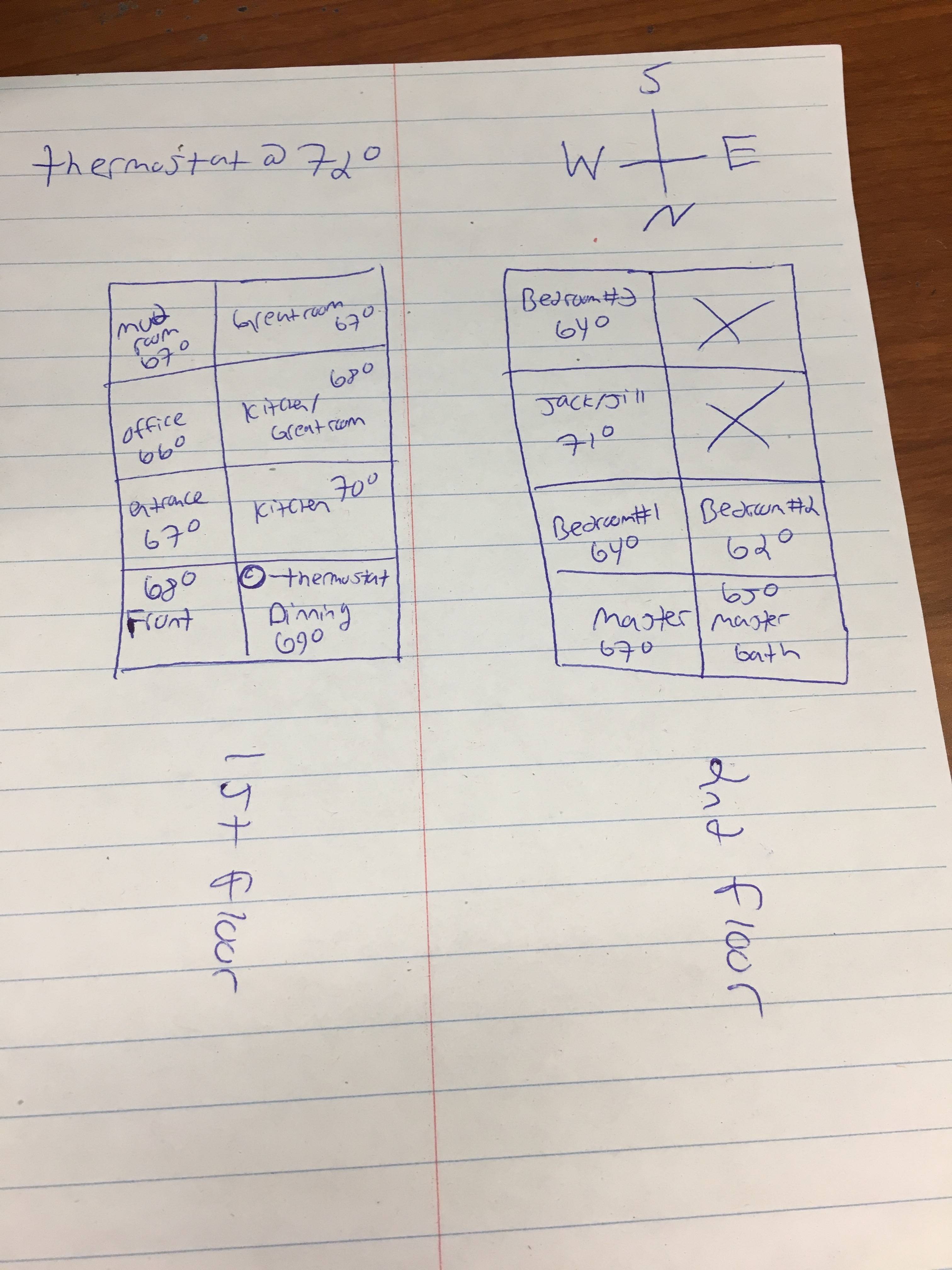 We're worried that this could be an issue with our HVAC since no rooms in the house actually make it to 72, 68/70 is actually our preferred setting. Our realtor said that the HVAC was old and that we would likely need to replace it in a few years. But we're wondering if there could be another issue.

I've attempted to play around with the dampers and in doing so I can make all of the rooms upstairs warmer but the problem rooms still don't hit 68/70 and I had to set the thermostat at 74 to get most of the house around 68/70 and by doing that the master upstairs becomes horribly cold.

Could this be a damper issue and I'm just not setting them right? Or is it something else because there aren't actually any rooms that are hotter than I want them to be.

I was reading about boosters for specific rooms but I'm worried that adding them will make other rooms colder.

I was also wondering how complicated and expensive it is to move the thermostat to another colder room upstairs and if that would help.

Thank you for your time.

I think two things will resolve 95% of your problem. Get a new thermostat (I like my Nest), and adjust your vent dampers seasonally and to suit your space usage.

Your thermostat apparently has issues with temperature, and a modern "smart" thermostat offers many benefits. One is the ability to run a fan outside of the normal heating/cooling cycles to equalize temperature in your rooms.

The variance between rooms isn't particularly concerning. Solar gain, airflow differences, human activity, and other factors can explain that. The highest temps are seen where cooking and bathing tend to introduce heat. Tweak your vents and see where that gets you. Be sure to look at the returns, too. They're critical to proper air movement.

Replacing your furnace won't do much unless you spring for multiple zones or automatic vent controls. That's probably not a practical approach for cost reasons.

The thermostat placement really won't help in this case because if you put it in a cold room all the rest will be warm. With a 2 story home there should be at least 2 dampers for a central forced air system. One damper for the up stairs and one for down stairs, if everything was perfect all you would need to do is adjust the 2 dampers 2x4 per year for the heating season the lower floor is opened further than the upper floor and for the cooling season the upper floor will me opened more, now since everything is not perfect each room may require some small adjustments to the vents in each room. This may take quite a few adjustment cycles to figure it out for the first season you do this but once all the rooms are balanced both upstairs and down mark the damper and vent position. If you think your thermostat is off 2 degrees calibrate it or just know it is different than other measurement methods but once all rooms are balanced they should stay that way until the change from heating to cooling, wilt my last home I was able to reverse the summer winter damper settings for example if winter the downstairs was 80% open and the upstairs 60% open for winter I adjusted downstairs at 60% open and upstairs at 80, after that I had 2 upstairs rooms that got hammered by sunshine so those vents needed to be opened , that's all I did and all the rooms in that house were balanced or at the same tempature when measured with a fine wire thermocouple probe & meter. Did I ever compare the reading on my probe and thermostat no it is not import and if the rooms are balanced and you are cold turn the temp up it really dosent matter what the display shows. With 2 possible main dampers and 6 smaller ones a hand held an annometer may be needed to see the pressure change effect of opening and closing a duct.

Not the answer you're looking for? Browse other questions tagged hvac heating thermostat or ask your own question.

1
Why won't my heater turn off when it reaches my desired temperature?
3
What to do about different rooms in the house being a completely different temperature?
0
Are my heat pumps using the right amount of power?
2
Cost of adjusting the thermostat
0
Bedroom 10 degrees colder than rest of floor!
26
How to improve HVAC system to make upstairs rooms more comfortable?
0
Improve HVAC in single upstairs room with vaulted ceiling
2
Ecobee Smart Thermostat- Using Room Sensor as primary control
0
heat is not responding to thermostat set temp but comes on when turned off and back on with the thermostat switch