Can i run cat7 cable parallel to electrical wiring?

I need to add ethernet cables to my business. Above the t-bar ceilling i have all the electrical wires 120 & 240 volts inside several metal pipes. If i run cat7 cables inside one pvc pipes that runs parallel next to the metal pipes. Is it going to cause problems? Interferences? Pipes run 100 feet long. Thanks

Ethernet uses differential signalling. This means that any noise applied to both conductors of a pair will cancel out. 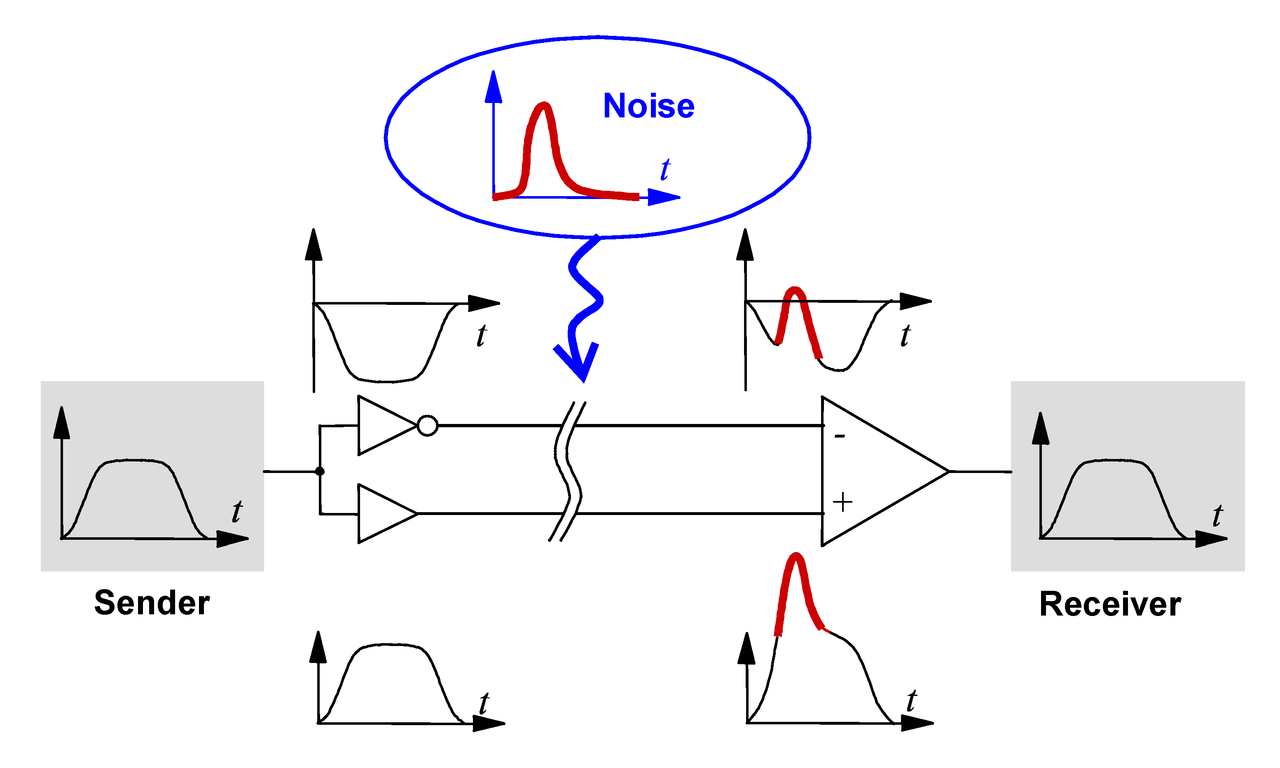 ([Illustration of noise on differential signalling, by Linear77, CC BY 3.0)

The pairs in a twisted pair cable is twisted. This ensures that over some distance the two conductors forming a pair has equal average distance to a parallel noisy cable. The noise induced will be equal in both conductors, and disappears when the signals is subtracted at the receiver end.

The metal pipes will block a lot of interference, as it essentially forms a Faraday cage around the current carrying cables. This reduces the amount of interference that reaches the actual cable.

In addition, Ethernet provides galvanic separation between the internal circuits of the computer, and the cable. This is performed by what's commonly called Ethernet magnetics - usually consisting of a common mode choke, auto transformer and isolation transformer. This transformer is made for signals in the MHz range (10BASE-T has a bandwidth of 10 MHz). To this transformer, 50/60 Hz signals is essentially DC. It's blocked.

In some industrial settings, you may have large frequency converter loads. These will pose more of a problem, as they create more noise on the grid, with higher frequencies, and often the currents are much greater, leading to a stronger EM field. But even in such circumstances, it's possible to use Ethernet - but more care has to be taken.

In short: don't worry. 100ft is not a long stretch, and currents in homes are rather clean, with small or no frequency converter loads, and the currents are rather small (<50A). There is no way you will have any noise in a normal home setting from putting Ethernet cabling close to a power cable.

I work with industrial control systems. We use Ethernet inside switchboards with frequency converters rated in the thousands of kilowatts-range. It works fine.

Ideally, any copper low voltage wire used for data, when run parallel to line voltage wiring should be kept 18" away and only cross line voltage at 90 degrees to eliminate inductive coupling. However, metallic conduit such as EMT shields the interference from the line voltage, assuming it is properly grounded. You should have no problem.

Why run pvc conduit? Why not just get CADDY datacom bridal rings and T-Bar wire clips? Cheaper, easier, less weight, easier to get into an existing T-bar ceiling, etc. https://www.erico.com/caddy.asp

Not the answer you're looking for? Browse other questions tagged electrical wiring pipe or ask your own question.

13
What size wire should I use to feed a subpanel in my garage?
3
What is the preferred method for removing & replacing electrical wiring in the garage?
0
3" conduit with many bends - is it worth to build it?
0
Direct Burial MC Cable
4
How can I get 30 Amps @120V using several 12AWG and/or 14AWG cables?
4
240V/60A circuit in PVC on the ground
1
Can I run a 60A sub-panel off of another 200A sub-panel?
2
Voltage imbalance at the end of a sixty foot run
1
Will a 3 inch (8cm) separation between CAT6 cable and 120V HV cable cause problems for 10-Gigabit Ethernet?
0
Can I get 240 volts to a hard-wired baseboard heater by plugging into a nearby outlet?