Why won't my oven heat up?

I've replaced two faulty parts in my oven after a small explosion stopped it heating up, but I still have a problem.

Both were obviously dead. The element had a huge hole in it and the cut-out had no conductivity.

Worth mentioning that the thermostat seems to work, because the temperature light does turn off when using the grill to reach temperature.

Why does the cooling fan stay on and the elements stay cold?

What other parts can I check for faults?

I may have bought the wrong fan element by matching it to the product number on the part itself. I've opened a separate question about this.

The selector switch is fried. Copper melted between two connectors. Will fix or replace and post back if still not heating.

I appreciate everyone's help with this, but I'm posting an answer myself a I'm the only person who can in this case.

The final cause of the oven not heating was a broken selector switch. See image. 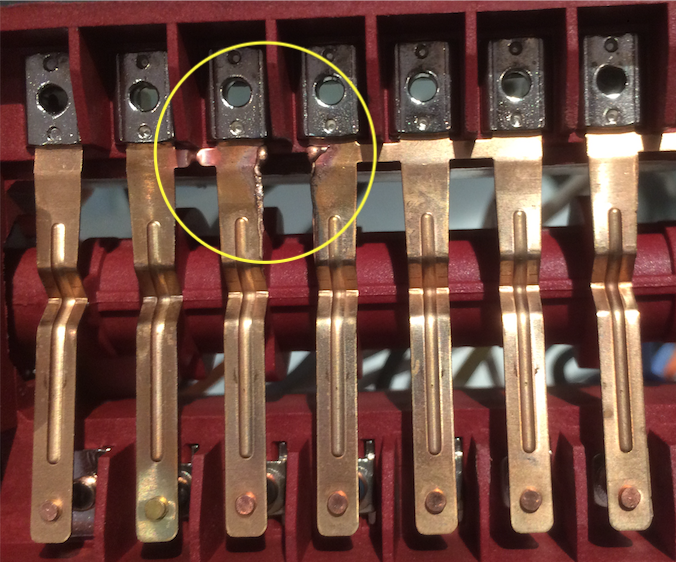 With a new fan element, thermolimiter AND switch - the oven is heating up fully on all settings. Spare parts cost about £90.

I think I may have a further issue with the ventilator, but I'll post a new question about that if need be.

As I said in the comment you need to look for the cause. I am not saying throw parts at it, but a place to look.is the controlls as I have had similar failures in the past. Google Electrolux oven won't heat, I did and repair clinic.com. causes 8 &9 are relay boards and the controll board. You already troubleshoot the fuse ( cause 6) in many cases the damage is obvious because the problem was big enough to blow the fuse. If you want to fix the oven looking at these components are the next step. Checking the relays with a meter to verify that the contacts are good would be one way , live power testing probably should be left for pros as we have the correct safety equipment, many of the relays are mechanical if you hear them click they are getting the signal but the contacts in that position may be burned open/ not conducting.

-1
Which is the correct Electrolux replacement element?

3
What could cause my oven to trip at a certain temperature?
0
Oven heating element receives power when off?
1
Oven has power, preheat light is off, but no heat
1
Is this thermolimiter faulty?
3
brand new oven heat element gone bad. my fault or faulty oven?
0
Can't get the oven light cover off
3
Oven stops heating
1
DCS RGU-366 Oven will no longer heat