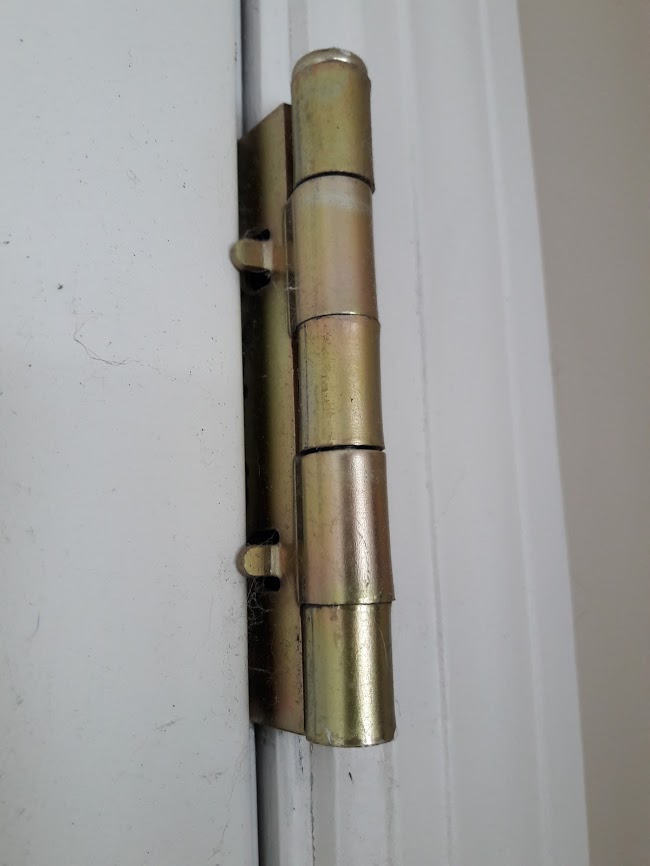 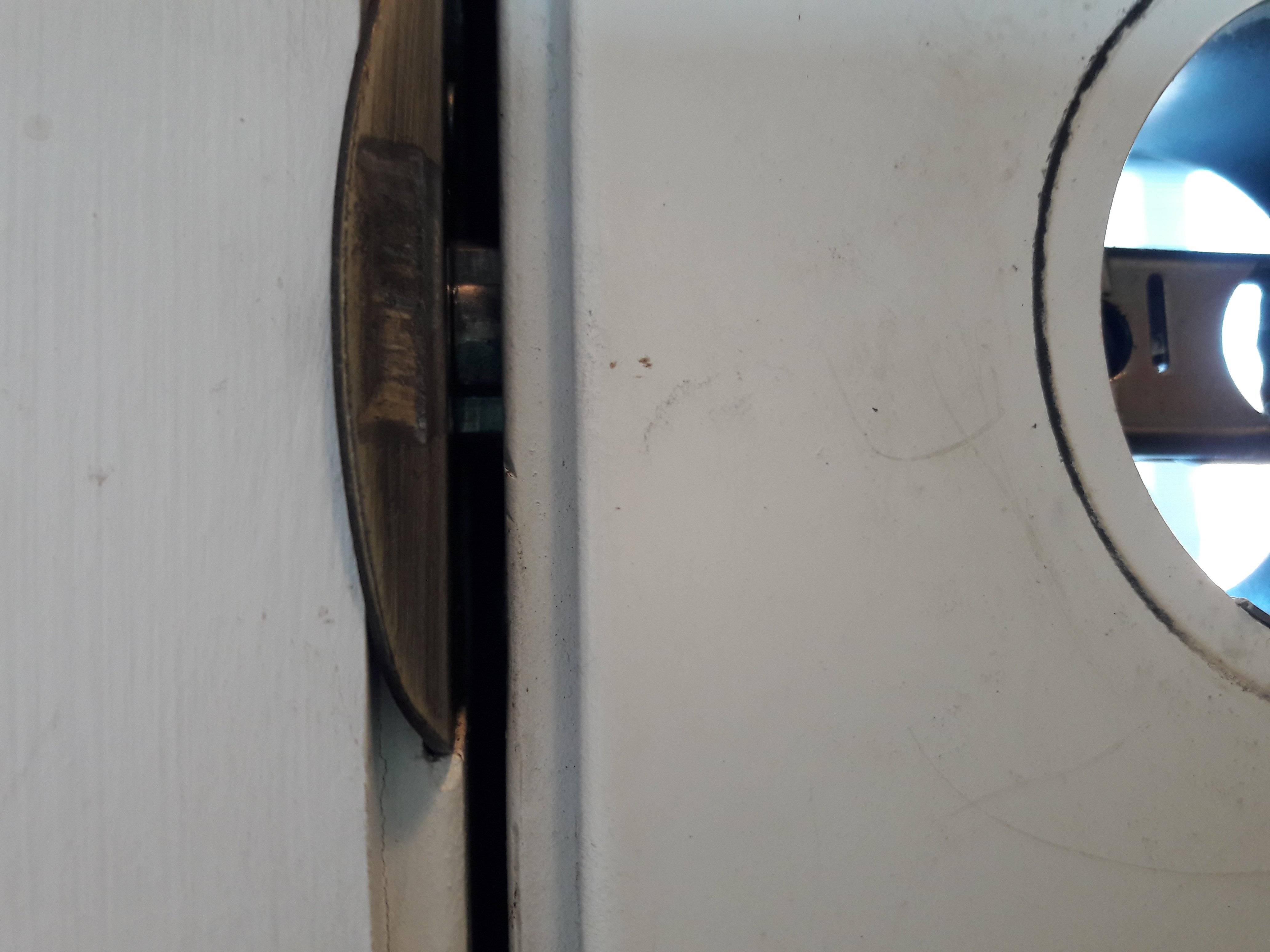 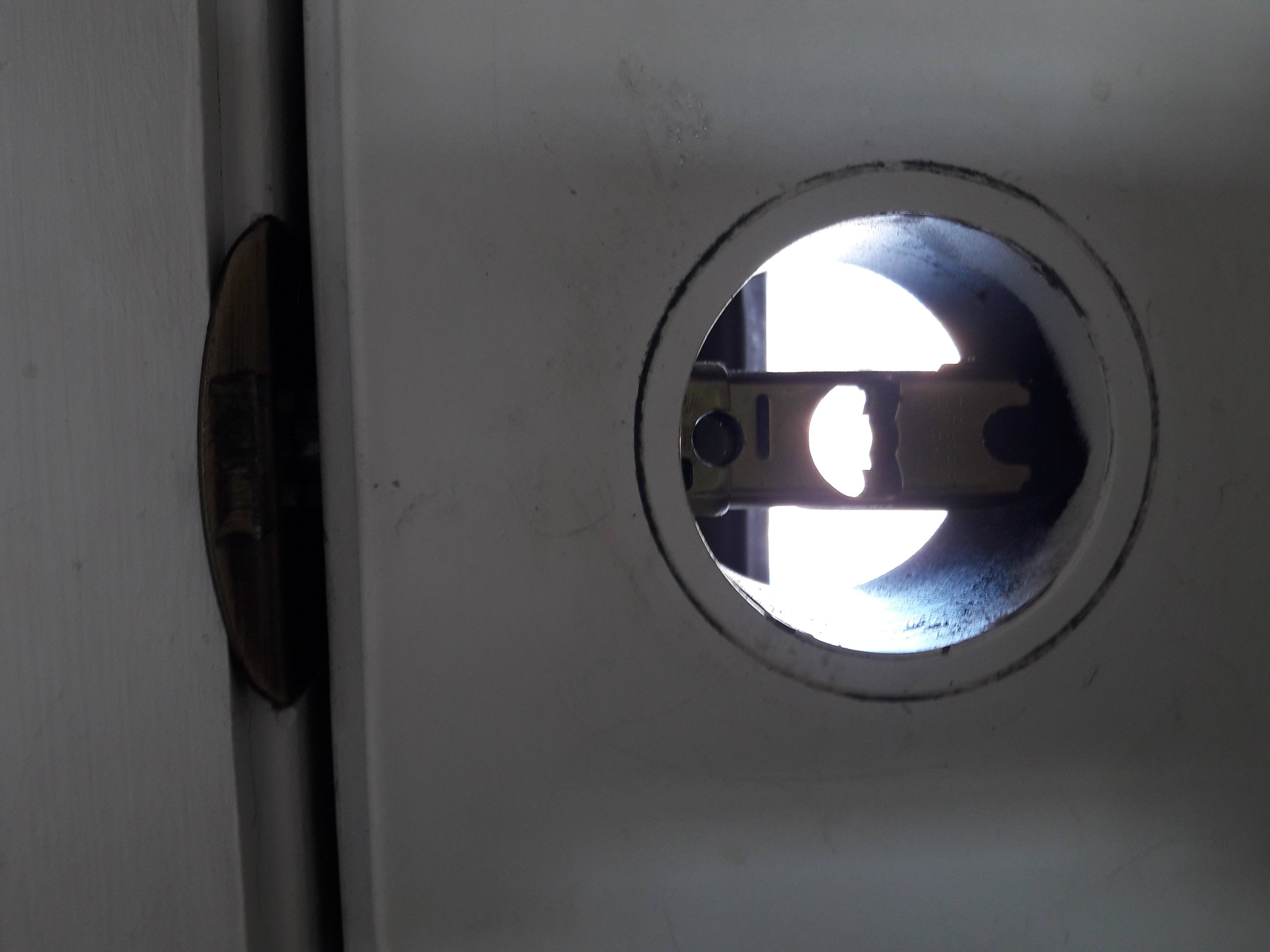 The latch bolt for my exterior door is stuck inside the door jamb. I have removed both door handles, but can't get the door open to get at the latch plate or strike plate. Short of taking the entire door off the hinges (it's 10 degrees in MN...), other suggestions?

I believe it's a Kwikset Titan lock.

This isn't a recent post but I thought my experience might help someone. I had a similar situation where the knobs were off but the latch wouldn't release. It seems the transmission plate came unattached from the latch somewhere inside the mechanism, so sliding it back with a screwdriver did nothing.

I tried to take the door off the hinges but it wouldn't budge even with significant force. I have an older door with a 5 inch backset so the latch was very long and perhaps helped to hold the door tight even with the hinge pins out.

Ultimately I got out my Dremel multi max with a wood/metal blade attachment, slotted it between the door and jamb at the face plate and sawed through the bolt. I really didn't think that would work, but the cheap Kwikset bolt was partially hollow and didn't provide a lot of resistance. If you go this route you'll want to dig the cut piece out of the bolt hole with a screwdriver and not your finger, as it will be quite hot from cutting through.

Typically you are supposed to remove the knobs with door already open. On some sets you can install the knob with the stub ( I:E: the part that is shaped like a half circle that goes through the hole in the latch of the same shape ) without depressing the latch from the side of the door but some require you to press in the latch. Try to put in the knob with the stub that fits into the latch and turn it. If not you may be able to use a screwdriver to push back or turn or a combination or pushing and turning the mechanism to retract the latch.

The tongue is stuck due to friction. The friction may be inside the latch or may be between the latch and the plate on the door jam. So, spray lubricant on all parts (both those easily accessible and those hardly accessible) and wait for the lubricant to seep into little cracks. Then reinsert the door knob (or use a screwdriver) and try to giggle and then turn the door knob while pushing on the door, top and bottom (alternately), and do this from the inside and the outside.

Depending how well your house is built:

At the risk of wondering what good your lock really does, many doorjambs are (too) bendable and a simple prybar (between door and jamb) will move the jamb enough to pop the latch free (or at least enough to allow prying on the bolt itself.)

this just happened to me and I got it without unhinging the door or sawing so wanted to help.

once you remove the face and get to the picture above where the deadbolt is stuck in lock position in door but handles are removed... you'll notice that you can move the deadbolt back a little by sticking a screwdriver into the center piece with the 3 holes...(the piece that normally would control the lock mechanism)...youll see you can get it to move a little, but the piece doesnt have enough room to get the bolt put because it runs into the back of the hole (hoping this makes sense) well once you see you can move it a little, take pliers and reach in and gently bend the piece towards you until it is free of the area so that it is in the shape of an L, deadbolt in lock and piece is bent free and then you have enough room to just pull the bolt free....no sawing or unhinging necessary

Not the answer you're looking for? Browse other questions tagged doors stuck or ask your own question.

1
How can I remove a dead bolt?
5
Quiet door latch
0
Latch locks when door handle pulled down
0
How to stop door knob latch from twisting and sticking on strike plate?
0
Install deadbolt in steel door and door jamb
3
Exterior Door Width is Shorter than Jamb
3
How to repair a French Door latch that's keeping the door from opening
11
Do I need this special strike plate on my laundry room to garage entry? It's creating problems with a new lock