How can I hide or dress up a large wall of debris?

We have a large "debris wall," made up of stumps, tree trunks, and other leftovers from when our lot was cleared, to one side of our driveway. We considered having it removed, but it provides a privacy barrier between us and our neighbor. If we removed it, that would leave a wide open area.

You can see, in the photo, part of the edge of the driveway in the lower left and again in the upper left, as it goes over a rise going to the house. There isn't much room between the debris wall and the driveway. You can also see part of the house. We worked hard on the house design and on the yard near the house to create the feeling, when you drive up, that you're entering a story book setting.

It would be nice to find a way to hide, dress up, camouflage, or otherwise make this easier on the eyes. We considered ivy, but that can spread and get out of control easily (on both our side and our neighbor's side). If we plant trees or bushes, they'd have to go at least 20' high and block the view during the winter as well as the summer.

Last summer a lot of pokeweed grew up on part of the wall and, while it's a weed, it's not ugly and helps hide the debris. But during the winter, when it dies out, while it's still easier to look at than the debris, it doesn't seem to want to grow on the end you can see in the photo.

We'd like to hide it but make it look natural or at least interesting and not out of place with the mood we're creating for the house and yard. I wouldn't be opposed to building something, but that would be expensive and a lot of work if I just built some kind of wall along the 70' or so of this mess.

Edit: This debris wall is at least 15' tall, maybe 20' in some places, from 50-70' long and maybe 30' or more wide. It's also not fully stable. While everything seems to have settled, there is no way I'd climb on it to reach the top or so I can spread or shovel anything on it. 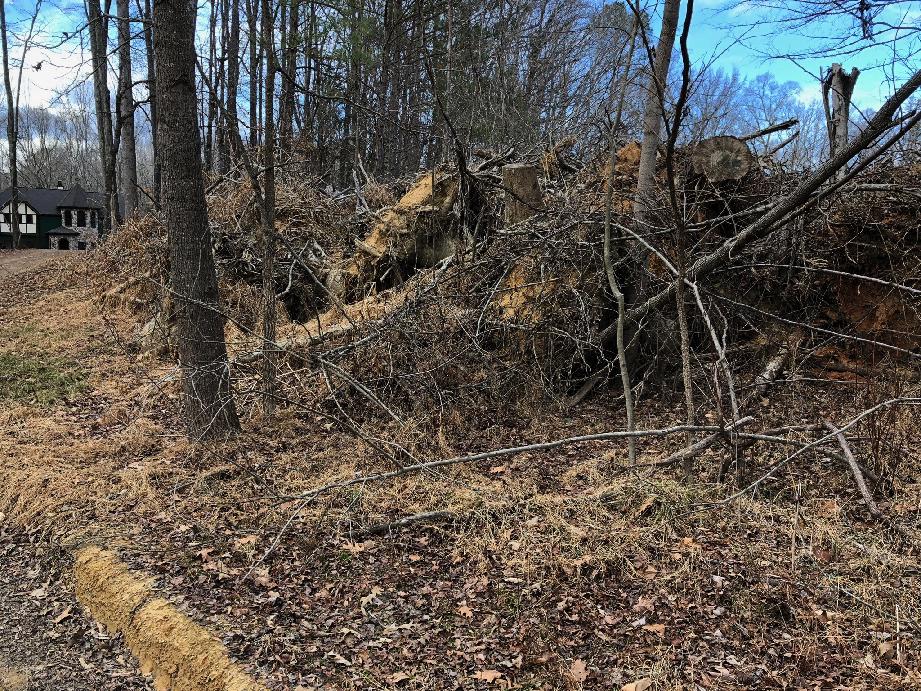 Plant desirable native shrubs and vines that would grow over the irregular surface and transform it into an aesthetically pleasing feature. You might have to add soil to fill voids, and you could mix leaves into this soil for fill.

You could put up a barn owl box to entice one or a pair to live there and provide natural rat control. If you don't have barn owls where you are, then you probably have screech owls. We have had boxes for screech owls in our back yard for almost 40 years and they do some rat control, but not like a barn owl or barred owl would.

Have you had any suggestions that in the current condition your yard is not in compliance with residential code? We have a natural yard in a sea of manicured lots and we have gotten three citations for code violations over the past 10 years. The underlying criticism is that our lot (10,000 sq ft) is not neat and so surely must be in violation.

The code inspectors have so far ruled that our yard is in basic compliance under the xeriscape allowances in the city code, but they always find one or two technical violations or common violations that are mostly overlooked. Last time the only thing we had to do was trim trees in front to be above 14 ft from the street surface.

The solution is simple - truckloads of manure.

Bury the mess in manure (horse is often easiest, but check your local sources) and the wood will rot down, while it will be easy to grow anything on top (pokeweed does have some downsides, such as the poisonous but attractive to children berries.) You'll have a brief period of some odor, but once the surface ages a bit there should be none. You basically convert this mess into a mound, and after a few years, you'll have an area of deep, rich soil; But you'll have the eyesore dealt with pretty much as soon as it's buried, and if you do it in winter you'll basically avoid the odor problem completely. Most sources of horse manure are relatively (.vs other manures) high in bedding (shavings or straw) content, and this also pushes it to the forefront of my suggested manures, as that more quickly makes an inoffensive surface layer.

If you (or your spouse or neighbors) have a huge issue with deploying that much organic animal byproduct, an alternative approach is a similarly huge pile of spoiled/mulch hay. You'll want 12-18" over the top of this mess at least, and you might need to renew it, as it will not pack in as well as manure does, so it may develop holes as it breaks down.

I have over 100 yards of horse manure and shavings behind my barn, I turn it 2-3 times a year and work in fresh regulary and it is the best organic compost you can find, we even load for free, if you want a trailer load delivered that cost because we have to pay wear and tear on our equipment. Any one that would suggest a chemical over composted shit& shavings is part of the water runoff contamination problem in my opinion. Once composted this will grow grass or just about anything, we usually deliver 50+ yards to a nursery every year no chemicals in this stuff and my garden & flower beds grow quite well with just this stuff. So I would agree with @Ecnerwal , it will provide a support system for plants on top and help to breakdown the debris underneath. I thought I should add this my grandfathers farm had wonderful soil we grew hay on 3/4 and grazed on the last 1/4 rotating fields every year and using a manure spreader before he died I remember talking how his fields were 4-6 inches higher than his neighbor and his hay had more bales per acre, he said it was because we recycled the cow manure where his neighbor used chemicals. Except for the few years we did alfalfa we did not need to water until the 3rd cutting where the neighbor had to regularly water (all this did take many years as my grandfather worked that land for almost 50 years same as the neighbor).

Not the answer you're looking for? Browse other questions tagged outdoor landscaping backyard or ask your own question.

3
What are the steps for landscaping a lawn?
1
Drought-Resistant Lawn/Turf Recommendation For Area Above Septic
6
Can I regrade this gravel section of yard myself?
4
How to make a Tall Retaining Wall
1
Future underground electrical supply
1
What should be done about this concrete retaining wall?
14
How do I limit the water flowing through my neighbor's fence into my yard?
1
Can bushes help keep driveway and patio gravel stable?
0
Drainage issue in the yard