Is 12 gauge electrical cable ever wrapped in a white sheath?

I am trying to add a new outlet by branching off an existing one (for my mounted tv).

The cable that goes into the box contains one white cable and one black cable that has an extra red wire (as part of this box is on a switch).

I am comparing the new 14 gauge wiring with the existing wiring I have in the box and it seems smaller (somewhat). The housing on the wiring is white which is why I was under the impression that it was 14 gauge.

In this picture below the wire, i am holding is the new wire I just purchased. Where the solo white wire is the existing electrical outlet wire. 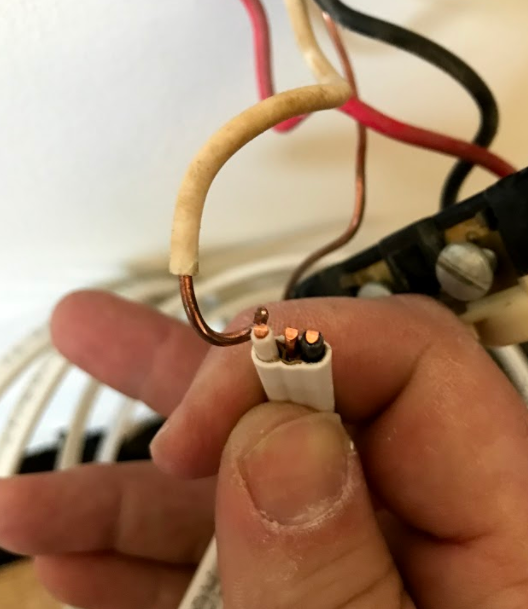 Am I just being paranoid / is it just the wire housing that makes it seem bigger?

Yep. White was standard for #14 through #8 or even #6 until a few years back, when color codes came into fashion. Read the stamp or printing on the sheath to be sure.

What you're seeing is the insulation on the old wire, which is white (and red and black on the other wires in the cable), but the sheathing on the new cable. It's just a confusion of terminology.

A wire is a single strand of copper (or aluminum), often coated with a colored insulation (except in the case of ground wires, which are allowed to be bare). The size of the wire is denoted by its gauge (in the US, at least): #14, for example. The color of the insulation is sometimes an indication of its purpose, although that's not always the case. Black is usually hot, white is usually neutral, red is switched-hot or traveller - but again, these are standards, not rules.

Several wires bundled together form a cable, which is coated with a colored sheath. The color of the sheath typically denotes the size of the wires contained within, although that's not always the case (especially near outlets, as the yellow sheath of 12/2 or 12/3 cable often gets sprayed by paint or texture by the drywall crew, making it look white). Cable is named or marked by the size and number of the conductors (excluding ground): 12/2 has 2 #12 wires plus a ground; 14/3 has 3 #14 wires plus a ground.

The best way to know what size the wire is is to measure its cross-sectional area or diameter, or check the sheath of the cable for any markings which indicate the size of the wires within.

I made this mistake recently, assumed my home was wired with 14 gg based on the sheath color, also assumed breakers were 15 amp (it's just what I'd seen in my previous home)... Went to work with it, and saw the same thing, read the sheath and it is 12gg, breakers, yup, 20 amperes. Now I have an extra 25' of 14 gauge, and had to buy more 12 gg.

M_JM_J
99
1
Add a comment  |
Highly active question. Earn 10 reputation (not counting the association bonus) in order to answer this question. The reputation requirement helps protect this question from spam and non-answer activity.

3
Electrical outlet has two black hot wires but one neutral white wire?
1
Should I replace the neutral wire that I accidentally cut in a Romex cable when installing a new outlet?
3
How should I replace a 6 wire, 12 gauge electrical outlet?
2
Adding additional outlet - max wires and box size?
1
Are the 3 wires found in standard NM-B electrical cable functionally identical?
1
How to properly add another outlet off this box?
2
How to attach electrical wire to messenger cable?
1
Adding a new outlet
1
How to identify type of wire running in attic?
6
Insertion of NM electrical cable into plastic boxes