How can I utilize the power at the range and dryer for other appliances?

I know that the range & dryer breakers:

Thanks for your time.

UPDATE #1: I found these cables after some hours of research. I want to know if this might work out.

I'll plug this directly into the 50amp outlet. 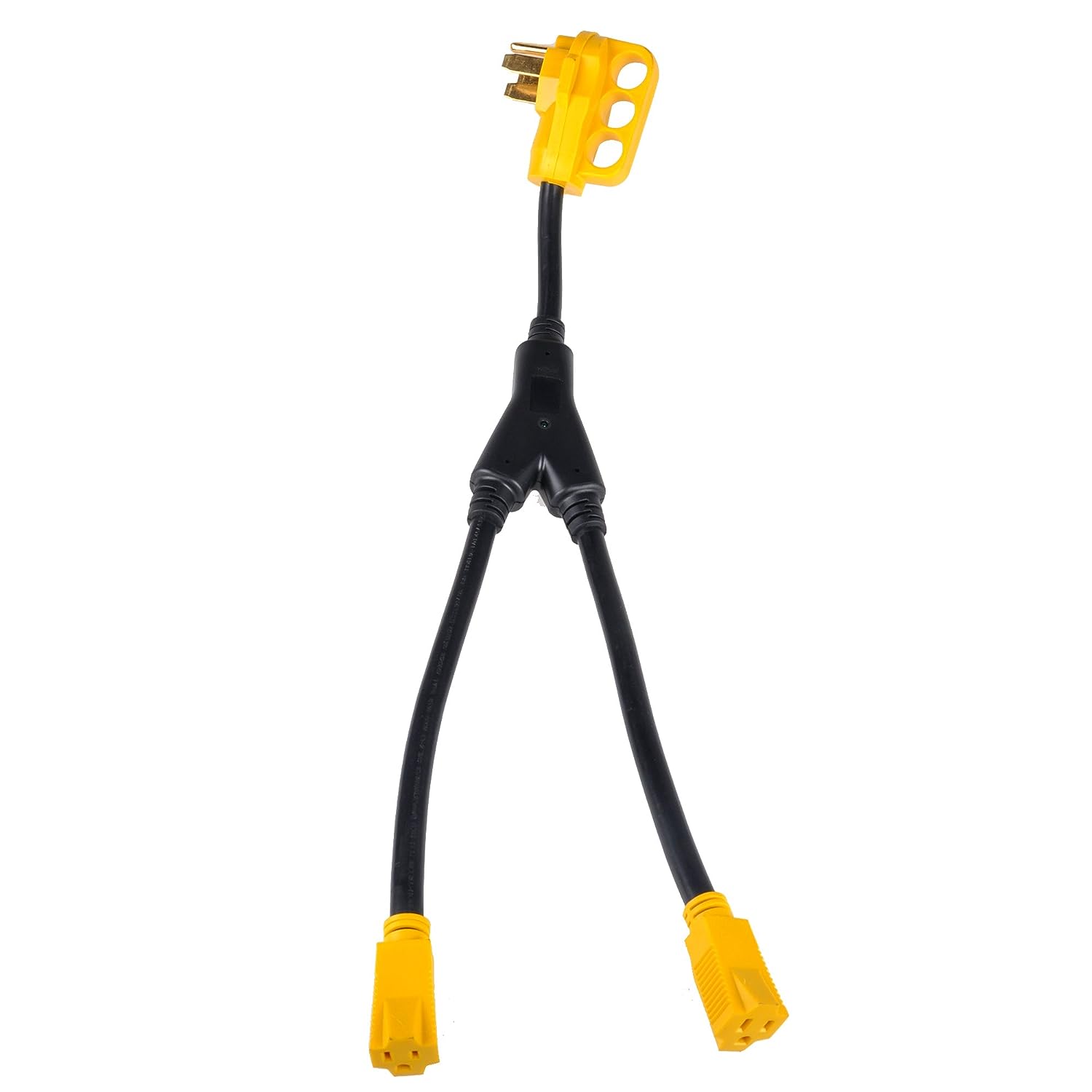 I'm worried about safety, voltage, and anything else I'm not aware of.

According to the National Electrical Code, receptacles on 40 amp circuits have to be rated for the circuit meaning they have to be 40 or 50 amp receptacles. Or you will have to hard wire your equipment with #8 wire and remove the range receptacle. Not very practical.

This is doable, just follow the rules. It can be a real shocker for EE types that the mains wiring world is so transfixed on Wiring Methods. Mains wiring deals with potent and lethal amounts of energy, and care in wiring is what keeps you safe.

Look at the cable where accessible. The cable jacket will be marked with the size.

Make sure the breaker is correct for the wire and receptacle.

Grounding: what to do with that 3-prong dryer outlet

Normally we think of grounding in terms of life safety and fire prevention. However with PCs you also want to not blow up the PC with ESD and the like. Now on the 4-prong NEMA 14-50 receptacle for the range/oven, you're all set.

The 3-prong NEMA 10-30 (hot-hot-neutral) dryer receptacle is a serious problem. This is a legacy ungrounded connector which, due to appliance industry lobbying, was legal well into the 1980s. Now, it's illegal but existing installations are grandfathered.

Now, if you pop the cover off that, you may discover that the neutral wire looks ground-like, a bunch of bare wire strands wrapped around the insulated hot wires. If that's the case, the easy way is redefine it as ground: Inside the panel move it from the neutral bus to the ground bus, and change the receptacle to NEMA 6-30 (hot-hot-ground). Now it is fit to plug in a PDU. It can no longer power a dryer, which needs neutral.

You might also be able to retrofit a ground -- in recent years, the Electrical Code was amended to broadly permit retrofitting grounds. In this case, just run a bare #10 wire via any proper and safe route (doesn't need to be the same route) back to the same service panel that powers the circuit. Now you can change the receptacle to NEMA 14-30, which can power a 240V PDU, or a 120/240V PDU, or a dryer also.

It's rather straightforward; once your receptacles are in order, you obtain a PDU whose rating is compatible with the receptacle, and you plug it in. The PDU provides overcurrent protection for each of the devices plugged into it.

A subpanel lets you install any number of circuits, including one for the original dryer/range! (Of course the supply breaker will trip if you tried to run the miners and the dryer at the same time! But you won't have to unplug things constantly, which is damaging to those large plugs.)

Code absolutely requires a new subpanel have ground. (Interestingly, Code does not require neutral, but if neutral is present, the subpanel can supply both 240V and 120V loads.)

Don't worry if the subpanel is "too big", nothing wrong with a 100A rating subpanel fed by a 30A supply breaker. Mainly, go big enough - make sure you have enough breaker spaces - every 240V circuit will take 2 spaces, and they go fast! The subpanel does not need a "main breaker" in it unless it's in a different building.

Off the subpanel, you bring out as many 15A or 20A circuits as you need. You may need more circuits than the bare mathematical minimum, since you can't put 2-1/2 servers on a circuit. If they are 240V, you can bring them out to NEMA 6-15 or 6-20 receptacles, using the usual wiring methods.

Remember if your supply wire is #6, to bump the supply breaker to 60A.

Power supplies are sold as "X" (750) watts of usable load, but they are not 100% efficient. So its nameplate rating will be higher, and will state the AC power input either in VA or amps. If amps are stated, multiply by supply voltage to get VA, or vice versa. Or you can measure your actual load using a Kill-a-Watt or other meter. Use VA, not watts.

If your load is continuous, as I would expect Bitcoin miners to be, you must then multiply by a derating factor of 125%. E.g. If your measured power supply draw is 800 VA, you must provision 1000 VA of power. A non-continuous load does not derate.

Your #1 cost will be power. Think very hard about picking the best power plan, or moving to a locale which has really excellent power plans (one guy in Carolina pays 1 cent per kwh, plus $7 per kilowatt of peak. If he can make his power draw uniform and conform to some peak-time rules, his net cost is 2 cents a kwh).

Forcing all the servers to be in the same place is not necessarily a good idea. First, the problem of power provisioning. If you scatter servers all over the house, you can put them where the power already is: putting 1 or 2 on every receptacle circuit in the house, solved, no fuss, no bother. Second, distributing them all over the house means in winter, the heat is well distributed through the house, and in summer, your house's air conditioning can easier remove the heat. Air conditioning units have no ability to focus their cooling power on a single room - they assume all rooms are about the same temperature. Arrange your servers so that is so.

Putting all the servers in one room means the room is uselessly hot in winter, and pretty much in thermal runaway in summer. You can't just dump 10kw of heat into a single room and expect that to "just work out". It won't.

Another option for cooling a Bitcoin farm is oil/water cooling, but instead of having a little PC sized radiator dumping the heat in the room... pipe the hot water outside and use a car radiator (which has built in fans and thermostat, and is made to be outside in salt spray and vibration). I say oil/water because I understand water cooling isn't practical on Bitcoin miners, so use oil bath and interchange the heat to a water loop. And by water I mean propylene glycol antifreeze, that type because it is non-poisonous to pets.

20
Can I backfeed a portable generator into my house's electrical system?
2
How can I install a Miele Washer and Dryer that use a 240V/15A splitter?
1
Converting KFDD500ESS Dual Fuel Range from 4 wire to 3 wire plug
0
Circuit Load - With addition of LED recessed and cabinet lighting
3
Need help understanding amperage ratings for panels and sub panels
0
Double-pole breaker connected to two receptacles/outlets on same column/post
1
Is it normal for a power strip/plugs to have a metallic smell?
0
Generator wattage via their breakers