Sonoff with a traditional Dimmer Switch

Please excuse the crude drawing but would this work. In the UK so Brown is live, Blue is Neutral and Grey is Switched live. If left out the Earth from the drawing to simplify things.

I know control would be lost if switched off at the Dimmer but just wondering if this would work without setting fire to something. 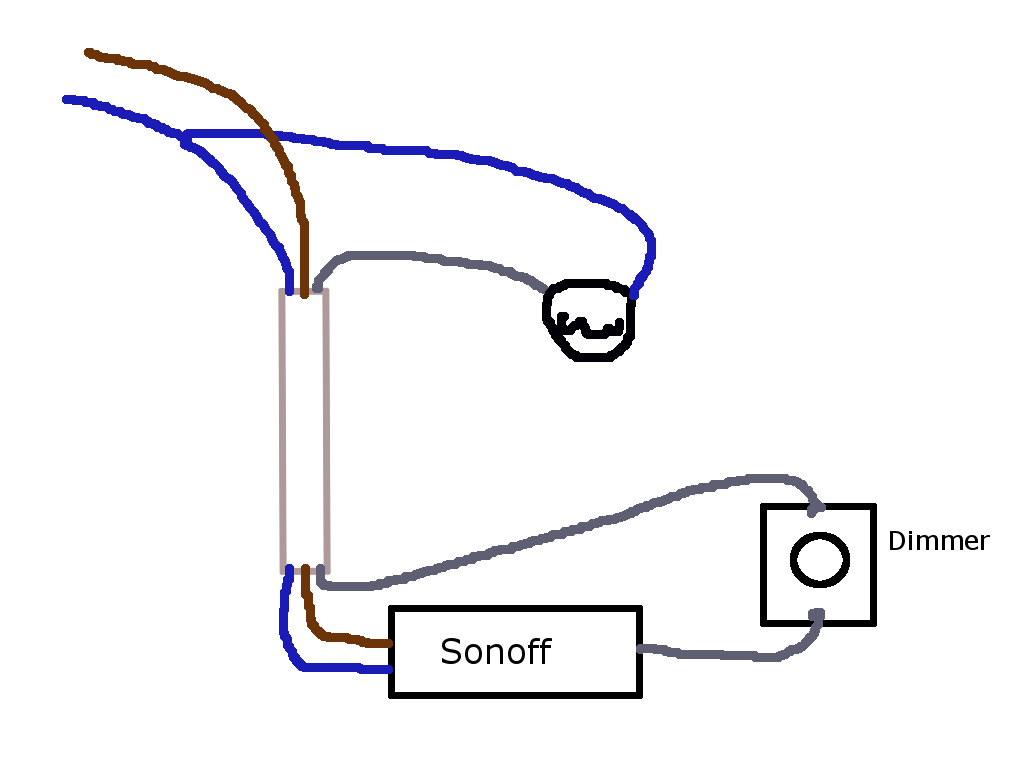 Or, you could get a higher quality module, like an Insteon, which includes dimming all in one module. Which lets you control both the switching and the dimming.

The biggest problem you have is the dimmer losing state when its power is severed. When the Sonoff switches it back on, the dimmer will have no recollection of how dim it's supposed to be, and will default to ??? full brightness??? You could prevent that by using an old-style twist-knob dimmer, but they only work with obsolete incandescent lights, and between the electric bill and the cost of constant bulb replacements, that defeats the purpose of saving money on the control equipment. You're much better off getting the right stuff, going LED and saving a bunch on your energy bill, along with never having to change another bulb.

Another option, if you commit to LED, is to go 12V DC on the LEDs. They use different lamps and different control technology such as PWM - they dim very, very well... and the modules tend to be cheaper also.

Not the answer you're looking for? Browse other questions tagged electrical wiring home-automation or ask your own question.

4
Why is this ceiling light fixture wired this way?
0
How Safe is this 5-way ceiling lighting DIY install
3
What is the grey wire dangling from my ceiling?
0
Confused by ~115VAC 5-wire cabling to UK thermostat
7
Australia: Which wire is hot / active and which is neutral?
1
How to check which wire is switched live?
4
OLD UK Lighting Live wire in neutral, how is this working? is it safe?
0
How to wire cables - 2-gang switch 3 lamps
2
Replacing 3-way Dimmer with Smart Dimmer