OK - in theory I have a BSEE degree from 1974 but in reality it was a Computer Science degree so I need help to make sure I wire (mostly in wall) this correctly and do not burn down my new house.

And a BIG THANK YOU in advance for reading this - I have tried to include everything in an orderly fashion but please let me know if I am unclear anywhere. 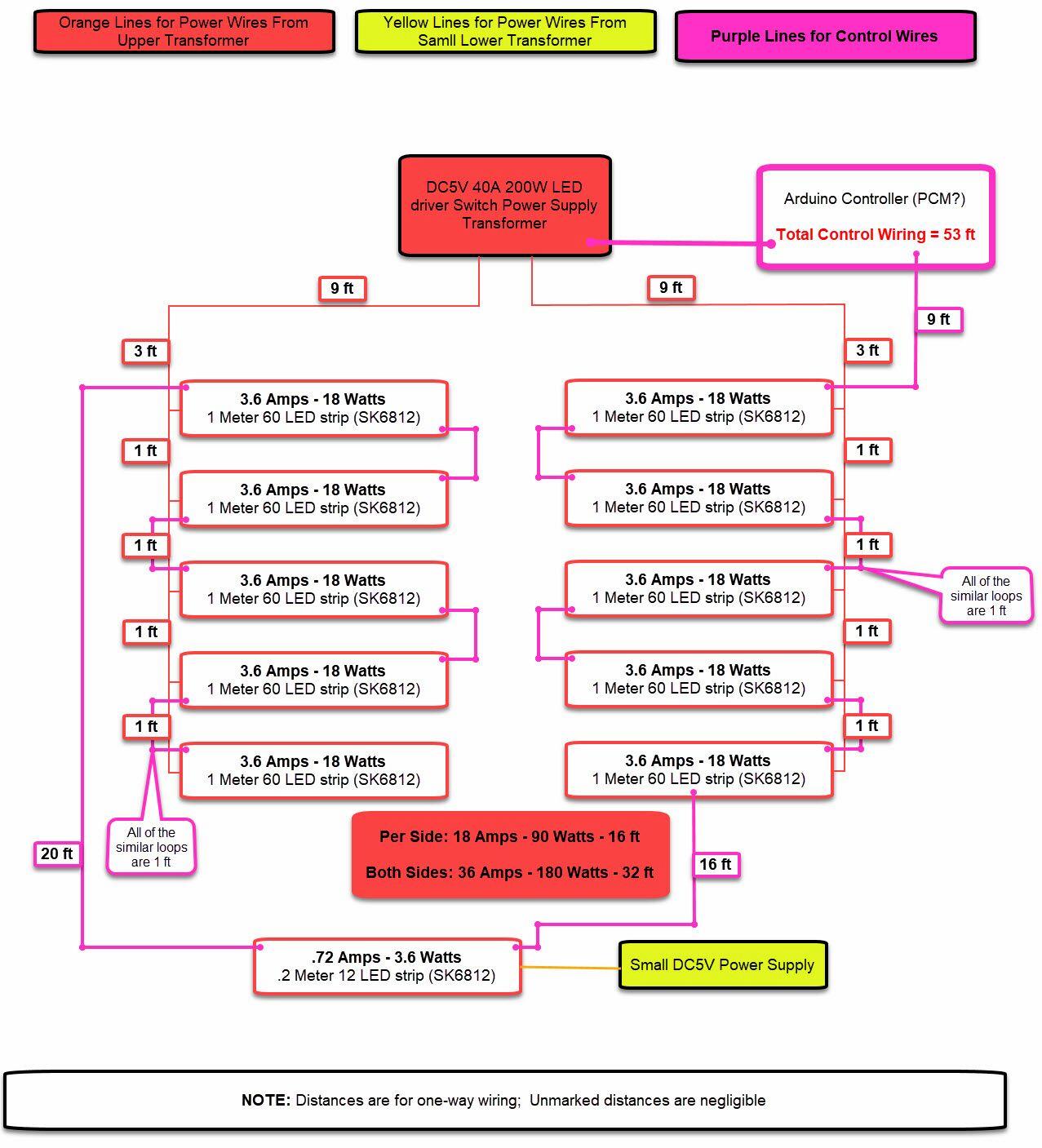 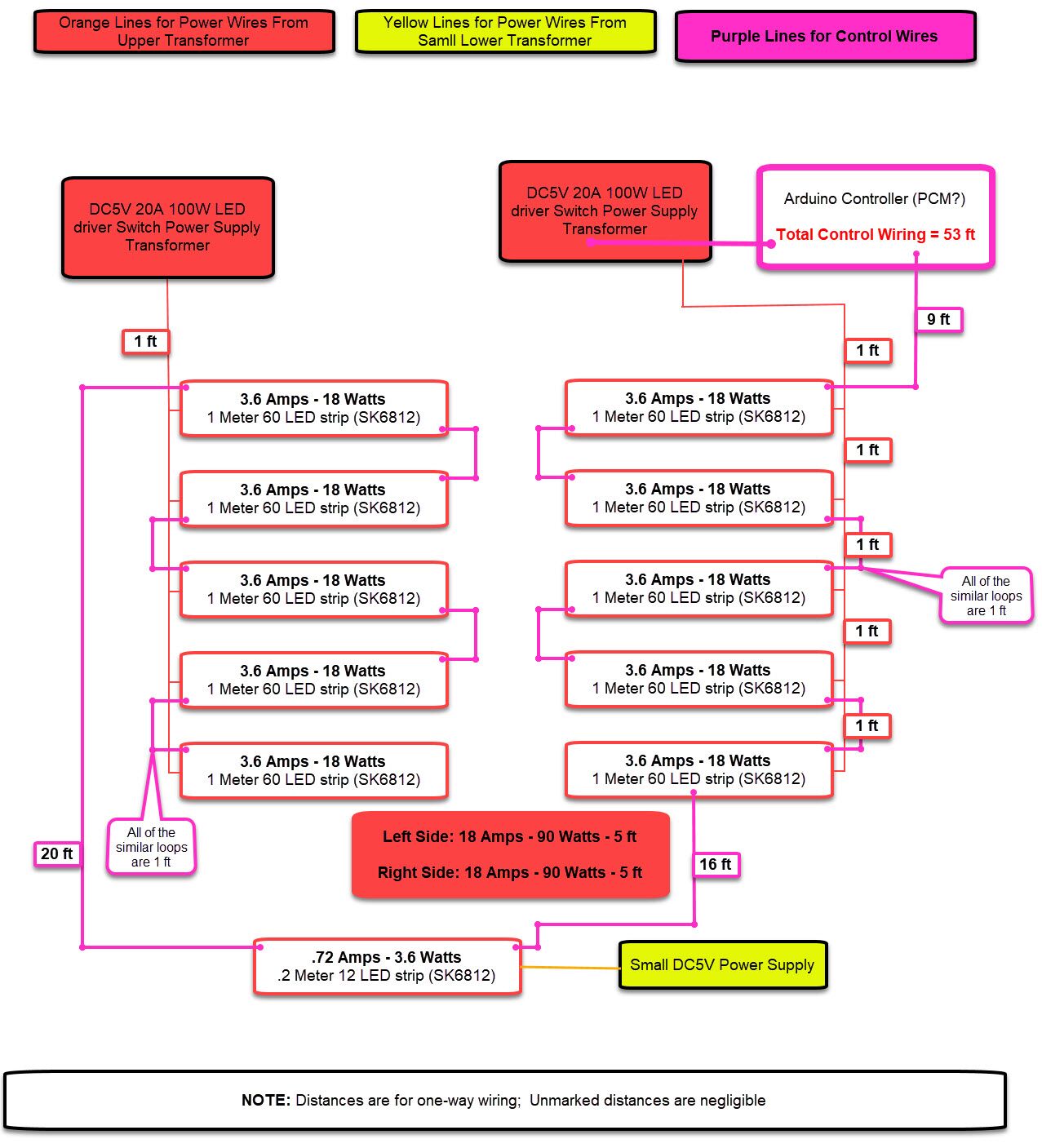 Now I would not need anything larger than 16ga wiring?

However, your limiting factor will actually be voltage drop. Because there are microcontrollers in the strip, you need to - if I recall my TTL spec, it's +/- 5%, so 4.75-5.25V. That means you can only have 0.25V voltage drop combining all the voltage drops together, including the voltage drop along the strip itself. Your drawings show feeding the strip in a lot of places. That's the right idea. With these cheap strips, assuming 0.10V drop down a 1m length of strip is hopeful, so you can tolerate 0.15V of additional drop in the distribution wires. And that's where you'll get nailed.

... and you thought you were going to use 16AWG... SMH the things you read on the Internet... and this is why I said the 5V makes it much harder. If this was 12V, you would not have learned the term "KCMil" today.

Please post schematics, wiring diagrams and more datas of all the components. So far, we have only a link to the power supply vendor... :(

I would change the plan a little. I would place the power supplies close to the location of the led strips I would get a box to put the Adriano in with 6 relays (they make them in 1,2&4 combinations) use the arduino to switch the hot leg for each. Now you are using 120v for the long run to the power supplies and there will be no voltage drop to worry about or ampacity issues to the led strips. I did something like this with one of my grandsons last year. we had 12 channels ( 3 sets of 4 relays) he programmed the channels in different patterns and we put a pot in so he could adjust the speed, this year we are going to add Wi-Fi. Everything is in a electrical box and there are 6 duplex outlets with the tab broke so 12 channels. I did use a 9v dc adapter to power the system . we had to stop at 12 channels because I wanted the entire system to run on a 120v 15 amp circuit and 12 was our max for the light strings if he turned them all on at the same time. By switching the 120v supply to the power supply by using this method on a 15 amp 120v circuit you could power close to 250 amps at 5 volts and use 14 awg wire to the power supplies. Now comes the part where we go to the mfg's listing instructions for the connection to the LED strips and this is usually 16 gauge or smaller. The mfg instructions on up listed devices trumps the NEC in fact the NEC requires that the mfg instructions be followed. Remember that inside a controll enclosure 16 gauge is good for 40 amps, I have seen some led strips using 20 gauge wire for over 10 amps I can't remember if it was 5 or 12vdc but this would be legal if it was how the listing instructions said to connect. Just something to think about.

21
What do I need to install LED strip lighting?
3
How can I control several LED strips with one remote control?
3
What gauge wire for long run from power supply to LED light strip?
1
Running a series of LED lights I have questions on 12 v power
1
When connecting LED tape lights to a transformer, should I daisy chain the strips or install home runs for each strip?
1
Will 300 watts of electricity ruin a 288Watt LED light bar
0
Output load of led strip dimmers
1
What wire do I need to power 10m of SK9822 LED strip
0
Powering and keeping 5050 leds in sync
0
Can I connect eight LED strip lights to the same power source?