Last week, my toilet gushed water out between where the bottom of the bowl connects with the toilet drain pipe, while I was flushing it. It was so bad I had to turn off the supply valve before it finished flushing. Long story short, I mopped up and then unplugged the toilet. Ever since then, my 3 1/2 GPF 1977 vintage Colton toilet has worked fine. What baffles me is that when a toilet plugs up, it normally OVERflows over the bowl rim. But this time, it “UNDERflowed”(actually gushed under) between the bottom of the bowl, and the top of the toilet drain pipe, directly onto the bathroom floor. This is bizarre! Doesn’t that mean that the seal between the the bowl and the drain pipe was blown? But if that were the case, why has water not even leaked, (much less gushed) out of there since? I have since stopped putting orange pulp gristle in the bowl as I think that may be what plugged it up.

Also, this is the perfect time for me to get one of those new “low flow” dual flush toilets that only consume 1.6-1.28 GPF to conserve water. I would like to get one with the same footprint that my present toilet (see photo)has, so that I don’t have to re-tile. Does anybody have any recommendations for a new toilet? 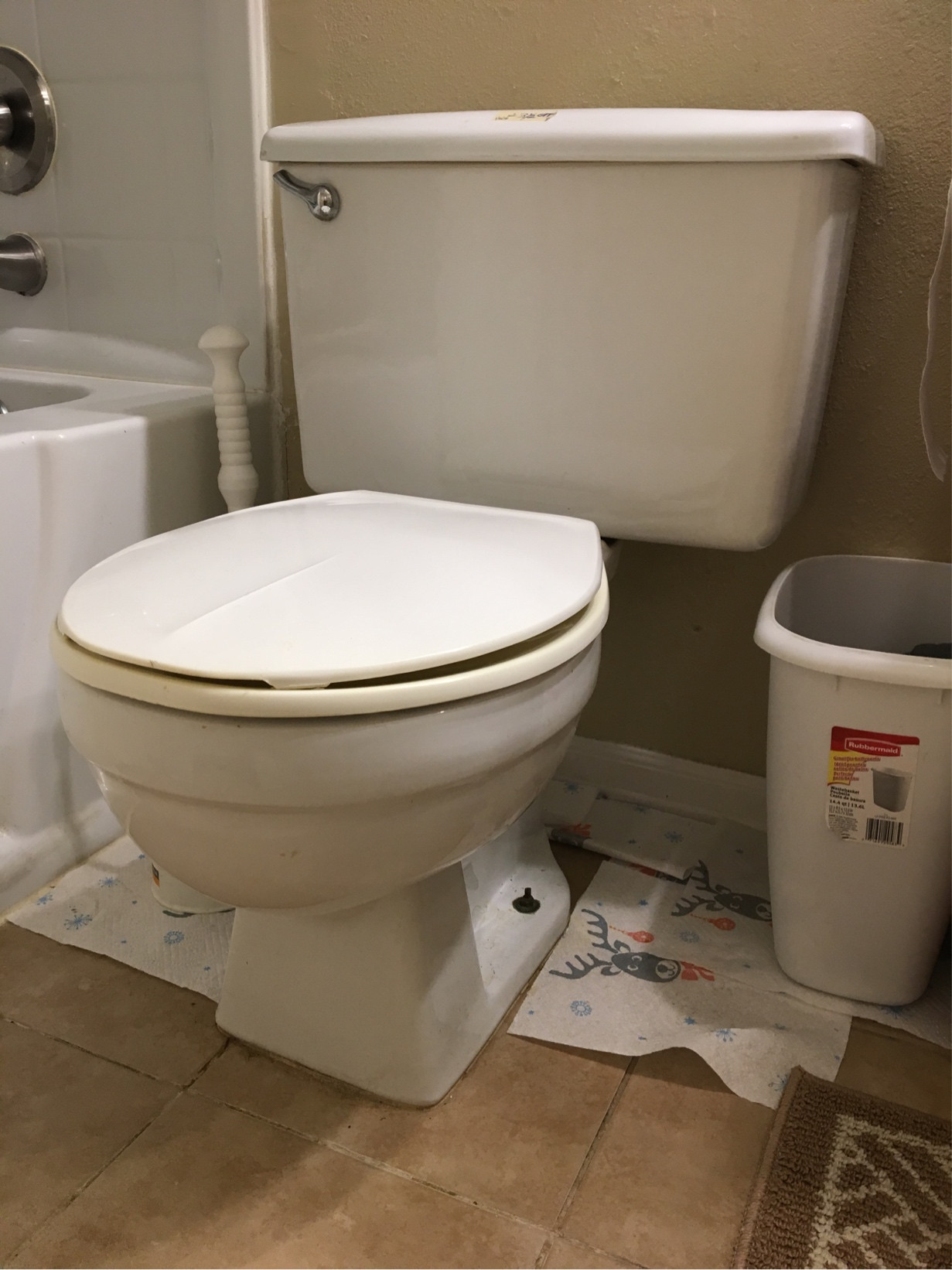 You may have a compromised seal between the toilet and the flange (where the toilet connects to your drain piping). This seal is usually done with a wax ring and can deform due to aggressive plunger-ing or movement of the toilet relative to the flange, such as when the bolts are loose and the toilet wobbles.

When your drain is working normally, that seal does not need to do much - the drain pipe is wide open and the easiest place for water to flow is down that drain like we want.

However if the drain pipe is clogged, then liquid may build up against the seal until the clog is removed. This is where you'll see a leak along the floor and/or on the ceiling below. That would be consistent with your story.

You should replace the wax ring. You will have to remove and reattach a toilet, so you're right that if you want to change the toilet this would be a good time to do so. Also, tile usually extends to just around the flange, so you usually don't need to match your existing toilet's footprint.

Not the answer you're looking for? Browse other questions tagged plumbing bathroom repair water or ask your own question.

0
Can I get a smaller toilet installed? (picture included)
0
Why won't my toilet flush right? Did our plumbers not put something back right?
3
Could a saturated drain field cause a toilet to back up?
2
What can I do about toilet water disappearing?
3
Why won't toilet flush after replacing wax ring?
1
I have toilet water disappearing after neighbor flushes toilet
1
Filling up toilet bowl after flush to save water
2
Can a clogged toilet drain cause a tank overflow?
0
Repair sealing inside toilet tank that leads to bowl
2
Why would turning on/off hot water when the toilet is flushing cause the tankless pressure relief valve to release water?