I recently had some electrical work done on my home to bring it up to code - there was no GFCI protection in the kitchen or bathroom when we bought the house, so our electrician fitted GFCI breakers at the panel. He did not use the GFCI outlets because he explained that our existing outlet boxes were too small to fit the extra size of a GFCI.

I have read that this may have something to do with the fact that most portable generators come with the ground + neutral bonded to the frame. Apparently, this makes the generator a SDS (separately derived system) compliant with OSHA for use on job sites. I can confirm that my generator is like this. It says so right on the power panel.

However, when connecting to the house, I have heard that the ground + neutral are actually already bonded together in the panel, so you should "float" (disconnect) the neutral wire at the generator. However, I have also heard this increases shock risk on the generator side.

I am not positive that this is why the GFCI breaker in my main panel is tripping, but it's a hunch. It could just be that the breaker doesn't like the power signal coming from the generator.

Regardless, I'd still like to have power to my kitchen from the gen.

Any suggestions as to why this could be happening?

That's to be expected. The neutral from the circuit is going through the GFCI breaker, but the hot is coming from the generator. The GFCI sees this as an imbalance, since there's no current flowing through the hot side of the breaker.

Here's what your setup likely looks like (if it was drawn really quickly in MSPaint). 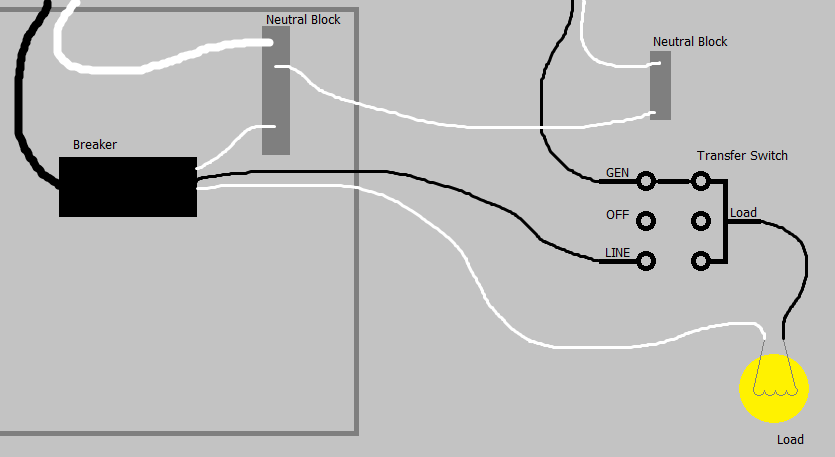 If you follow the current through from the generator, you'll see that it returns through the GFCI breaker. 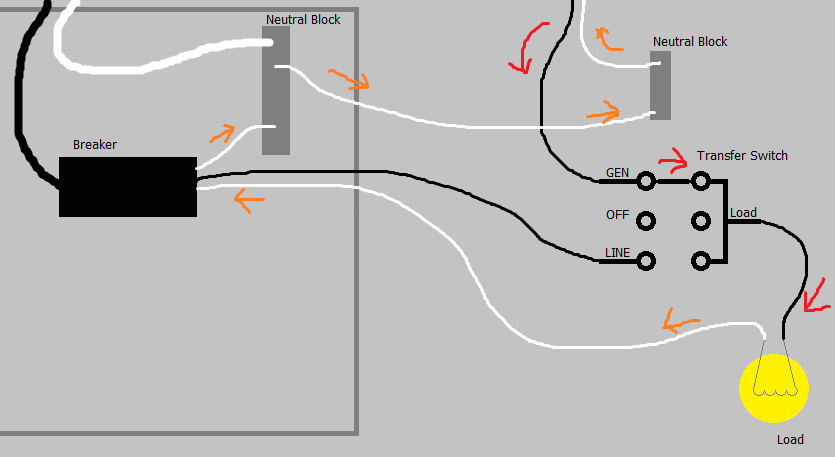 However, since the current is not flowing through the "hot" side of the breaker. The breaker sees an imbalance, and trips.

The cutaway in this image shows the internal circuitry of the GFCI breaker, and depicts the current flowing only on the neutral wire. 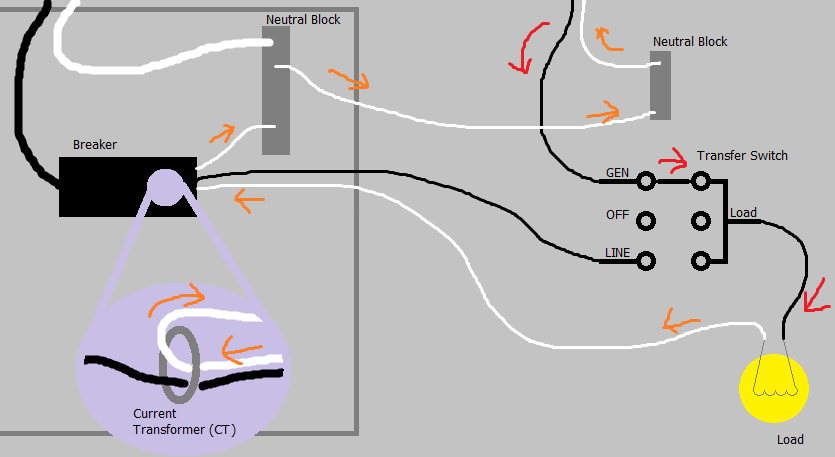 The decision to use a GFCI breaker was a correct one.

The problem is this style of transfer switch is about as "Bangkok wiring" as you can get - the worst series of code violations I have ever seen in a consumer product*. In modern panels with modern needs, they're a very bad fit, and this is a case in point.

These days, hot and neutral need to be handled together on a per-circuit basis. This thing doesn't do that, and that's the problem.

A better transfer switch (cheaper, too)

Obtain another service panel. Get enough spaces for every circuit you might conceivably ever want on generator or PowerWall + 4 more spaces. Spaces are good. 40 spaces is not excessive. Prefer the brand and type that matches the GFCI breakers you already have, because then you won't have to replace them (ouch)!

Then, add a generator interlock to it. This is a moving piece of metal that prevents two double breakers from being on at the same time - a regular double breaker, interlocked with either the main breaker or another double breaker.

Siemens makes the cheapest generator interlocks, Square D "QO type" is the runner-up, both for main-lug (no main breaker) panels. Code requires the interlocked breakers be bolted down (Siemens' kit does this). Some jurisdictions require it work with the panel cover missing (which eliminates some types).

Shop carefully for your panel and interlock, balancing cost of interlock vs cost of not being able to reuse breakers. Look at the breakers, not the panel: if you have alien HOM breakers in a GE panel (bad), look at HOM panels not GE.

Link it up with the original panel through several rigid metal conduit pipes. If they're within 24" you only need 1-2 large ones.

Install the generator interlock. If this panel has a main breaker, reserve that for utility. Make the interlocked breakers large enough to supply the subpanel, but any size you please - they are just switches and their breaker ability won't be used. 60A breakers are the cheapest.

Come off your main panel with thru-lugs, subfeed lugs, or an actual breaker. Use wire big enough to be safe at the max possible amperage. For instance if you lug off a 200A main panel to a 200A sub, your max current is 200A so the wire must be 3/0 copper or 4/0 aluminum. It's fine to have a 200A, 3/0 wire feeding a 150A subpanel breaker, as long as the wire physically fits; you can't whittle it down.

I'm not really addressing removing the neutral-ground bond on your generator. This type of installation renders that a non-issue operationally but it's still a Code issue.

To switch, shut off all your breakers. You generally want to switch no-load or low-load. Then shut off the present source, then switch on the desired source. Then turn on breakers of the things you want to power.

Why does this play nice with GFCI? Because you're making the generator selection before the GFCI breaker. In both modes, the GFCI breaker pulls hot off the bus and neutral off the pigtail, and supplies protected hot+neutral to the whole circuit.

* You couldn't hand-build a transfer switch like this, you'd get a sea of red-flags. I suspect it's in a gray area between what the UL White Book allows in an appliance and what NEC allows in field wiring.

The general concept of these transfer switches is there is a row of SPDT switches. One side taps the generator hot, the other side goes to the panel and taps a circuit's hot off the breaker, and the "common" goes back to the panel and joins the hot wire that used to go to the breaker. There is one single neutral wire that handles all generator current. That's ... ghetto, but workable for a 1960s panel. Here's what it looks like inside. 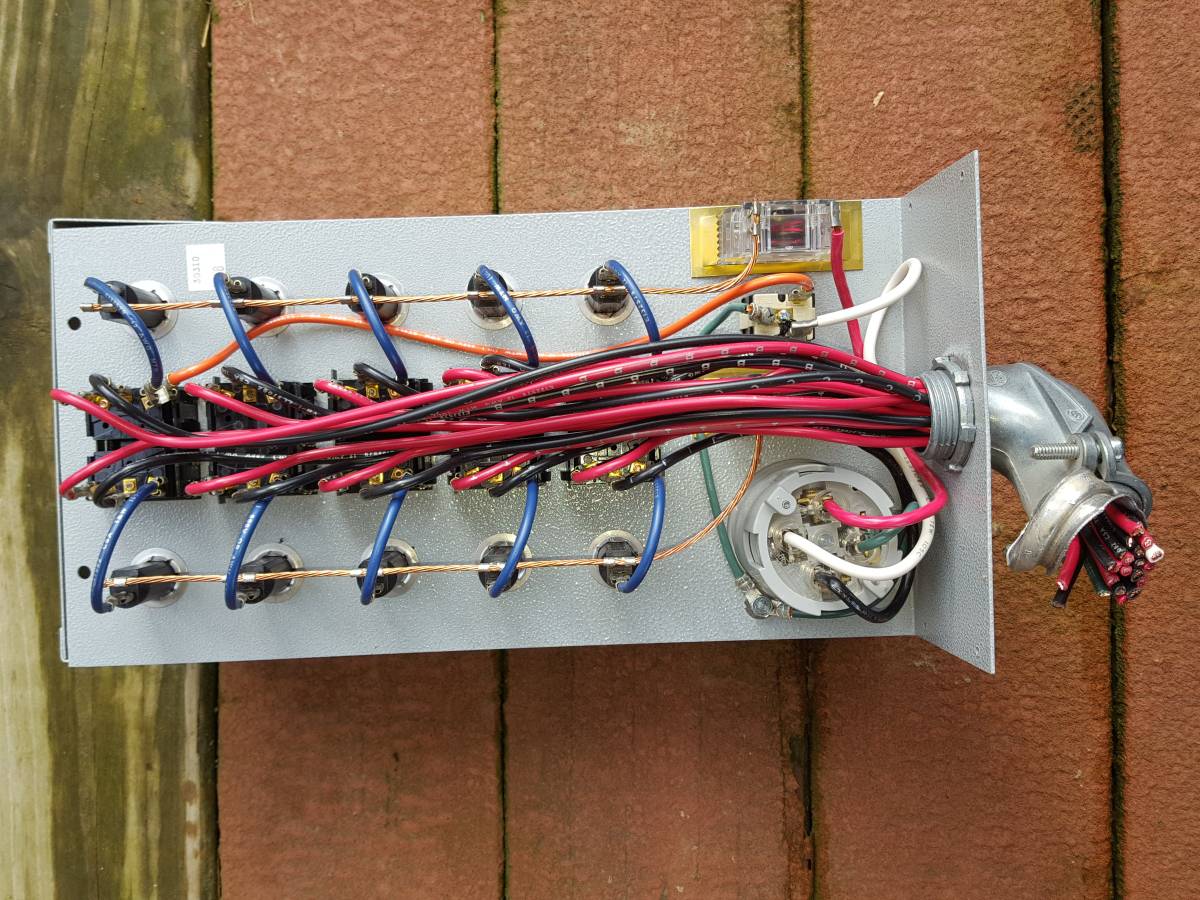 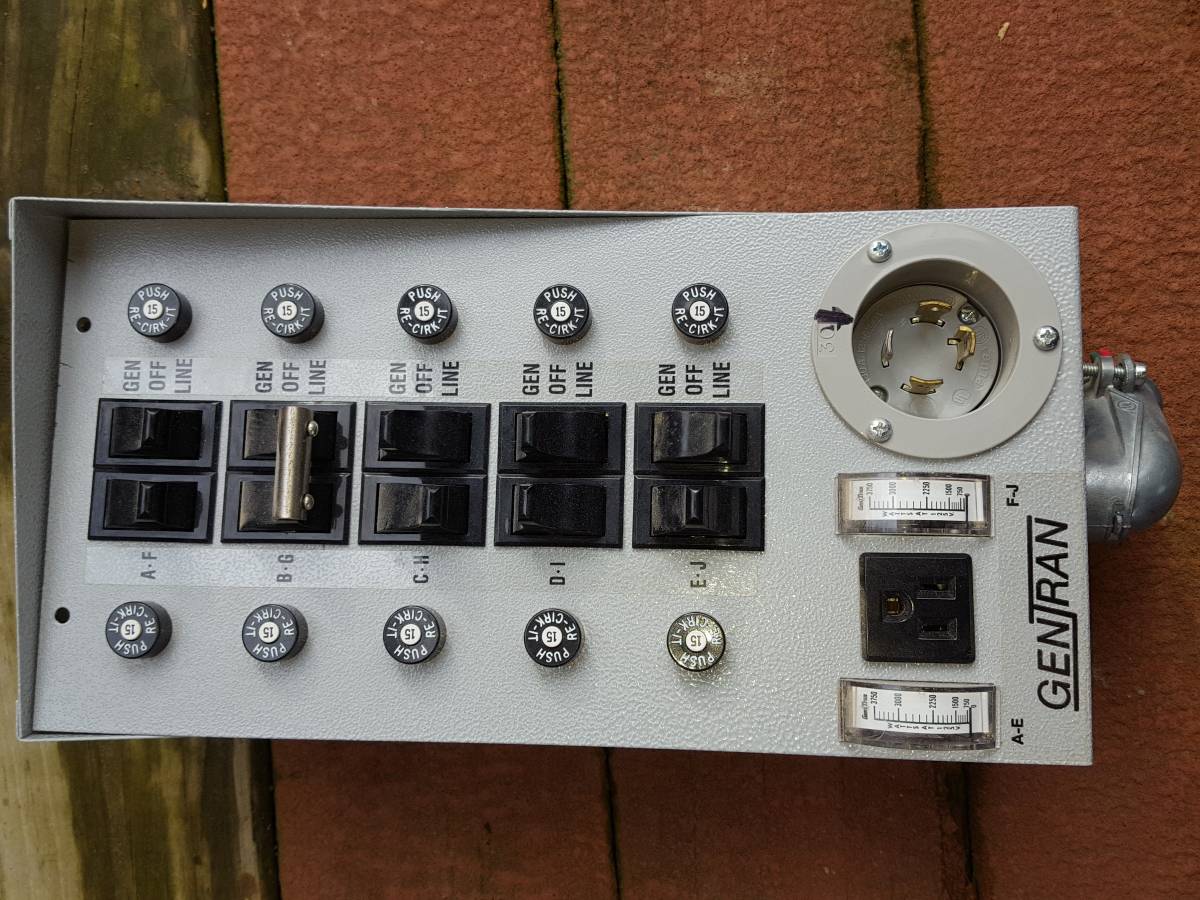 City building permit is required to add this, so it will be properly inspected.

What you need is Reliance Controls X Series panel!

From their website... "The X Series is perfect for use with generators having GFCI protected outlets, bonded neutral generators and installations requiring a separately-derived system."

Yes, it's a sub panel and you will need to shift critical loads you wish to use with your generator, but it'll be done right!

Here is a link to a tech sheet for that series specifically stating their panel addresses the GFCI / Bonded Neutral Generator issue.

Here is a link to an installation manual specifically discussing the install & test procedures, (gives you insight as to what the panel is doing for you, why it has to been a certain way, and what the job entails).

You will need to call Reliance Controls as they have made changes to their product, (website doesn't have all the new products listed, "at least as of 9 Aug 2020 it hasn't been updated yet"). Let them tell you the exact panel you need so you don't waste your time ordering the wrong stuff ~

Don't give up the protection your generator is giving you, your home, and expensive appliances. Additionally, some generators like Honda's EB5000i & EB7000i pro series generator can't be electrically modified to bypass the protections. Don't let your electrician talk you into what "he can do to make it work"! Sure, there's always ways to bypass safety and maybe still meet code, but why do that when this panel isn't that expensive.

Mine was $300 for Honda's EB5000i generator. Years of thinking about this issue and finally finding the solution!

Not the answer you're looking for? Browse other questions tagged electrical-panel gfci generator transfer-switch or ask your own question.

0
Getting full power from my backup generator to my electrical panel
0
Feeding half the panel with generator?
1
Electrical question on floating neutral generator for emergency use
0
Tripping of generator GFCI 30amps breaker
2
Connecting 240 volt generator to Main Panel
0
All breakers tripping during generator transition
0
Generator Transfer Switch for 2 Panels
0
Can 2 different portable generators be wired to off-grid cabin's single panel - not used simultaneously but rather one or the other at different times
0
To use any generator with the house inlet, may one leave the generator ground wire unconnected in the inlet?