Can chipboard shelves be varnished?

Note: including a lot of details to avoid XY problem.

Background
I have been dealing with a minor pest (psocids, in case you're wondering, but I don't want the conversation to become about that), mainly in a kitchen cupboard and the surrounding area. I've already taken a few appropriate steps, and the next step is to try to close various gaps that the bugs use to go through, such as the ones in the picture below at the back of the cupboard (I think they've nested somewhere behind there). I will be doing that with silicone sealant. 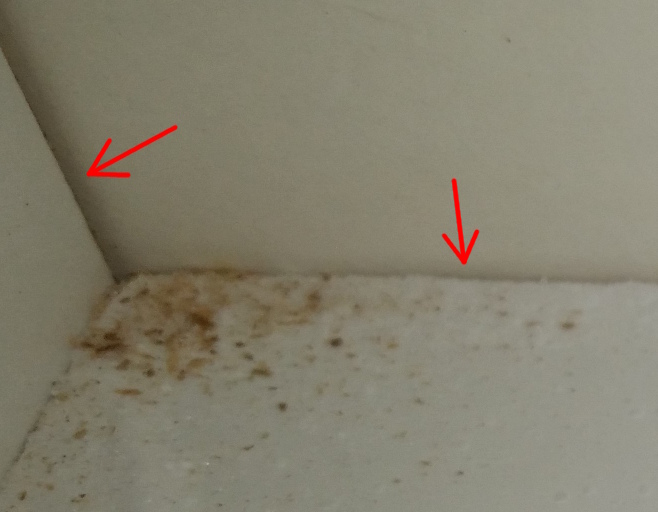 Problem
These bugs crawled everywhere, including the holes in the chipboard of the cupboard, which they seem to like. One such place where the chipboard is exposed, is the side of the shelves inside the cupboard. 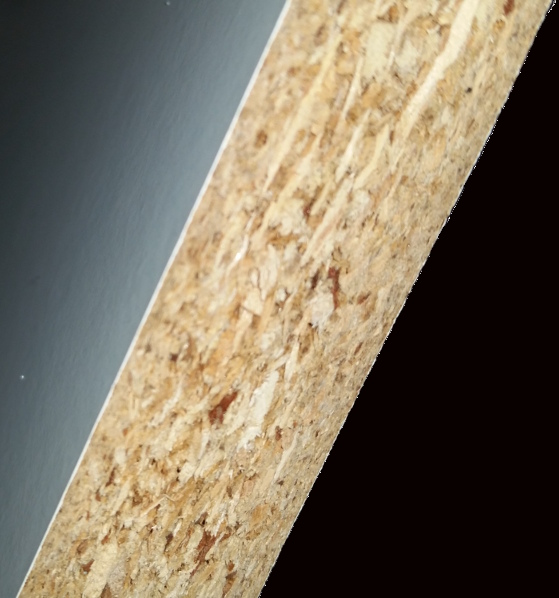 I want to seal these sides to stop bugs from hiding in there and kill any bugs or eggs that are possibly still alive inside. I don't care much about appearance since these sides are out of sight, but a clear or white layer would be better.

I tried spreading a thin layer of silicone on one shelf, but this makes the shelf a bit "sticky" on the sides of the cupboard. This is not a huge problem since the shelves don't move regularly, but the silicone is coming off easily due to this "friction". 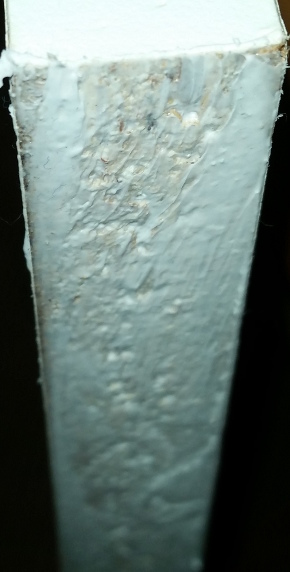 I thought to use some varnish instead, but then I saw a guy on Youtube (https://www.youtube.com/watch?v=FV-bLLVrakM) claiming that if I put plain varnish, I risk ruining the shelf by causing it to swell. He suggests "semi-transparent" (i.e., one that includes some paint), which I could not find on Screwfix or other places (UK). His interchangeable use of "varnish" and "stain" does not help either.

So, is it true that I should not use a varnish directly on the chipboard? If so, could I use a coat of paint directly and then varnish on top (since I can't find a mixed product)?

By Googling for "chipboard sealant" I found a UK vendor of "work top edge sealer" that seems to be designed for that sort of job.

Compiling information from Ken, RedGrittyBrick, isherwood and my own experience to form proper answer:

It's possible to varnish chipboard, but a suitable varnish must be used. Suitability will depend on how difficult it is for its components to be absorbed by the chipboard and cause swelling: oil-based would probably be safer than water-based.

The safest option would probably be to look for a varnish that specifically says it's suitable for chipboard.

Not the answer you're looking for? Browse other questions tagged wood pest-control sealing varnishing or ask your own question.

5
What materials do I need to install pantry shelving?
18
What is causing/caused these brown circular stains in my cabinetry?
13
How do I locate where bed bugs hide?
5
How do I prevent doors on a media cabinet from sagging?
6
How can I remove sheet metal screws from the wrong side of a wooden board with minimal damage?
31
How do I make around-the-room shelves for a seriously skewed room?
1
Fitted Cupboard With Angles - How To Prevent Tops Of Doors Catching When Opening?
2
Which varnish to choose for a first time job (desk)?
0
what should I use to cover a table made out of a broken bookcase?
2
Small bugs coming inside from closed windows at night; spray solutions?