My home has an alarm system inside that I've never used and don't have much interest in. I don't know if there's a password needed for the panels, and I haven't tried to program them.

At some point, the main control box inside the house started beeping. The battery had failed, so I disconnected it and unplugged the system. That's fine, except the doorbell no longer works. If I plug it back in (without any battery now), it stays silent for 24 hours and then the panels start beeping (I presume to let me know that there's no battery installed). At that point I unplug it, disabling the doorbell.

The system is an Arrowhead CT61. There's no marking on the control board for the doorbell. I was hoping I could just purchase a normal transformer and wire the door directly, but I can't find the specific wires.

If I can't find the wires on the control board side, I was thinking maybe I could put a tracer on the chime side. On the inside of the wall next to the door is a painted-over NuTone frame. I tried a knife around some of the mold lines, hoping that I could pop out a panel. But I couldn't find a separation. Is there supposed to be a way to access the rear of this type of chime without patching the wall? 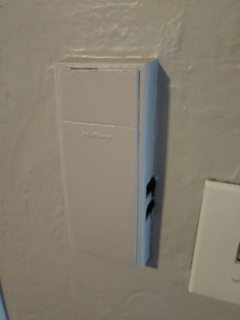 I could just put in a wireless bell, but if I've already got wires run to the door, was hoping that reusing them is better.

Browse other questions tagged doorbell alarm or ask your own question.

1
Unplugging Alarm System
3
How can I disconnect power to an ADT alarm system?
0
How can I mount a Ring Pro on this door post?
0
Ring Doorbell w/ Digital Chime
0
Removing Home Alarm System (UK)
0
Why doesn't a doorbell work after a power outage?
0
Tried to move my doorbell over a few feet but now it constantly rings like a school fire alarm