I broke the tab off my electrical outlet connecting the two hot wires, and then realized that this was unnecessary. Is it a bad idea to solder the brass tab back and still use the outlet? 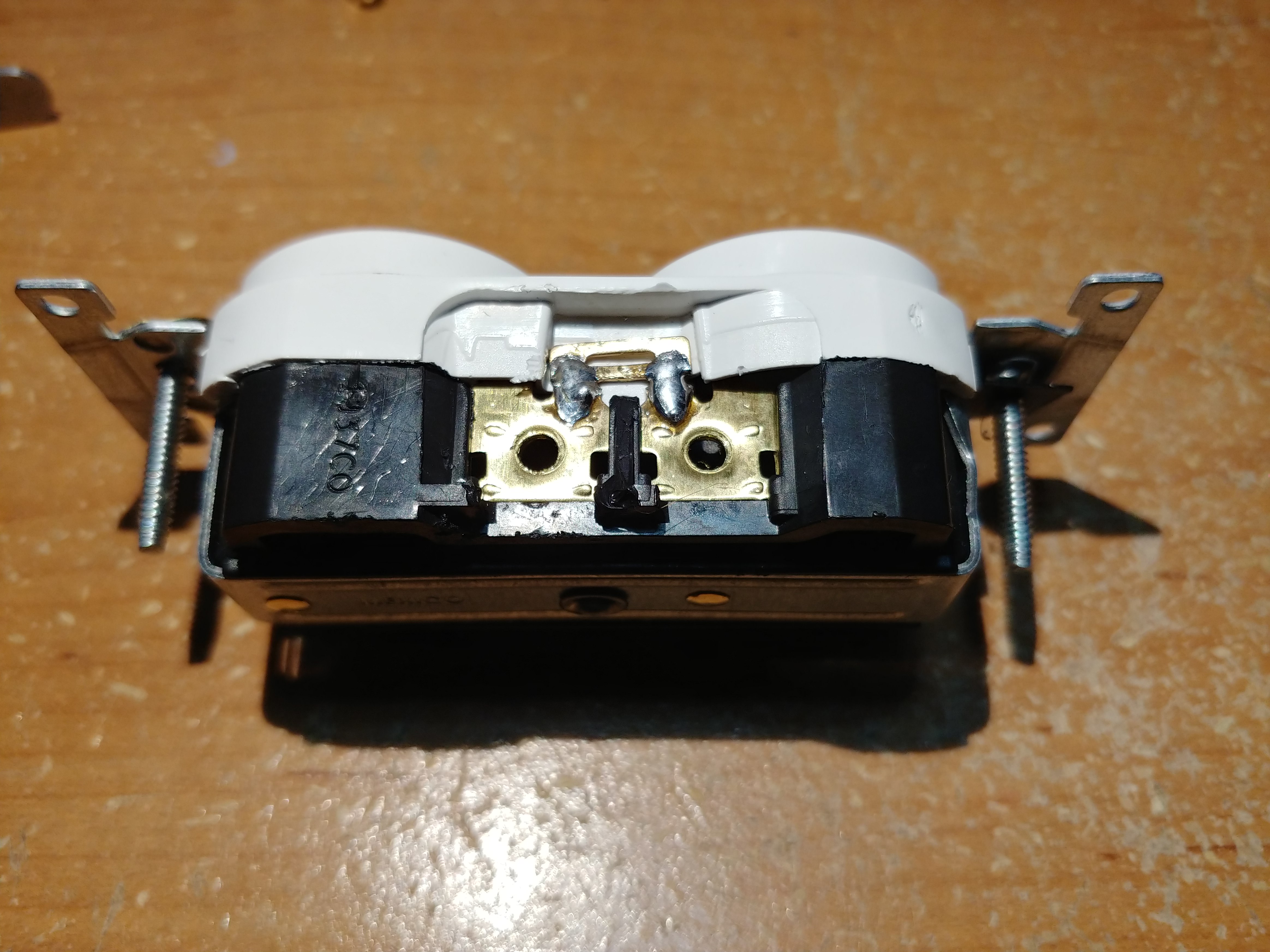 Into the trash goes this 75 cent outlet

It was wrecked by removing the screws and soldering the tab.

Soldering like that to alter a device is not a proper wiring method and is not safe. Solder does not conduct as well as copper, and melts much sooner. Edit: Here's a link that shows solder has 9x the resistance: copper 0.0168, solder 0.145. As soldered it has no chance of carrying the required current. Keep the solder in the electronics lab.

If you hadn't also pulled the screws out, I would say just unsolder the tab (you're not allowed to modify devices like this) and put 2 pigtails on the 2 screws. You join those with a wirenut to the two wires you would have otherwise attached to those two screws.

However since you've also torn the screws out, I would say toss the receptacle in the trash. They cost 60 cents, or $3 for the really good ones.

Those screws are captive, meaning when they are most of the way out, they get really stiff. You're supposed to stop turning at that point. That is a detent designed to keep the screws attached for your installation convenience. Pulling them out damages their threads. If the receptacle has features like screw-clamp, removing the screws "loses" the clamps and ruins the receptacle.

So now you know in the future: anytime you're loosening a screw and it gets weirdly stiff most of the way out, that is a mechanism trying to keep the screw captured. Don't do a "gorilla act" on it.

Don't solder it. Just use an extra wire between the two sections, preferably through an appropriately sized twist on cap. While solder may work, your introducing it in a way that will likely void your home insurance policy if a fire starts.

Looks neat and reliable but not kosher to inspectors.

I did the same thing, once in my 1st rec. room 30 yrs ago until I realized they used these for wall switched light fixtures outlets. 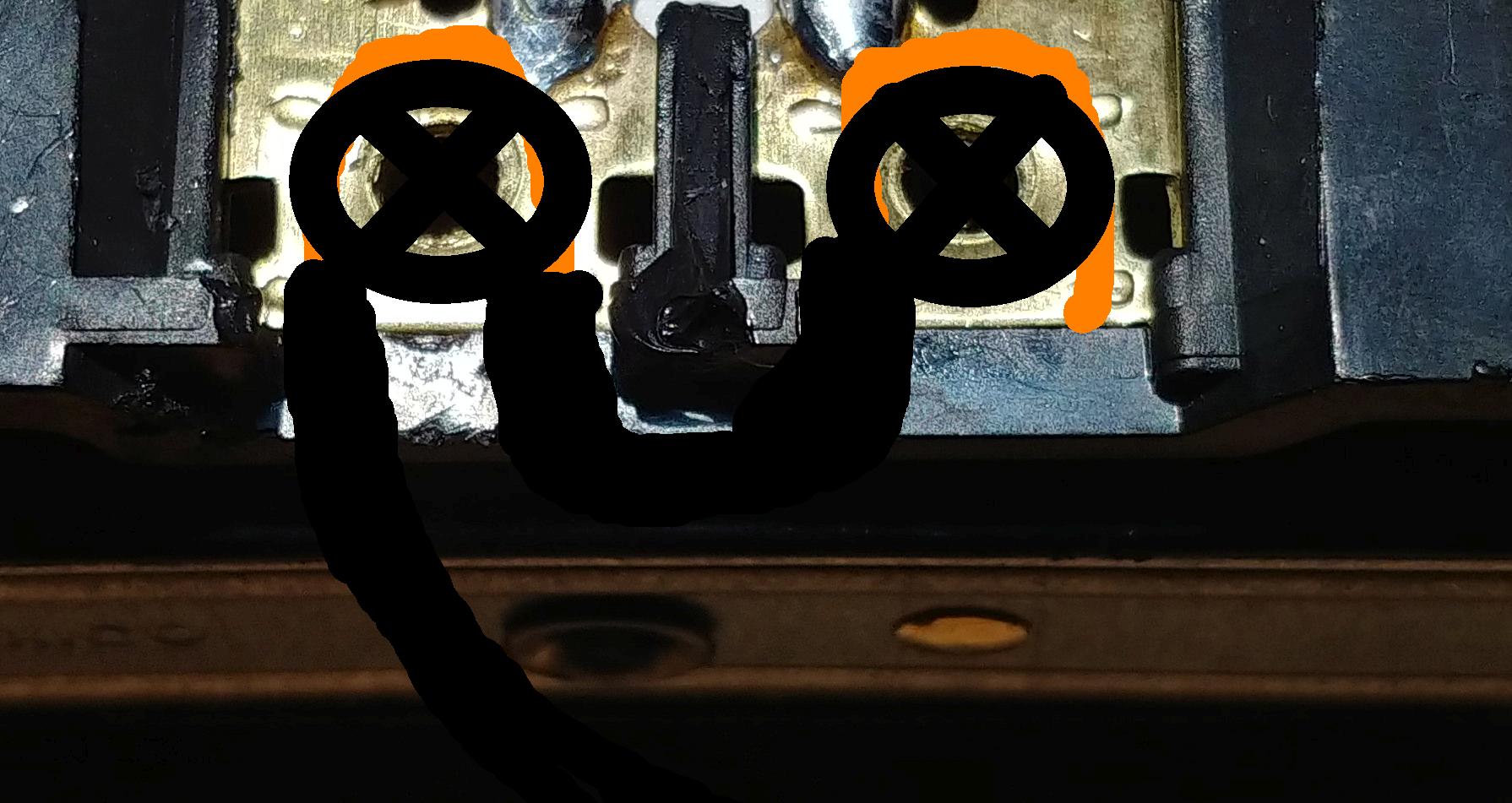 The dimples retain the wire from getting squeezed away from under the screw.

Someone handy with a needlenose can do an insulation strip in 2 sections on the same wire.

Not the answer you're looking for? Browse other questions tagged repair electrical or ask your own question.

10
First time changing switches and outlets (receptacles). Anything special I should know?

3
Electrical outlet has two black hot wires but one neutral white wire?
2
Existing GFCI outlet wiring to a new switch
1
outlet intended for half hot does not have tab removed
1
Wiring Options for 14/3 NM-B Cable and Two Single Pole 15 Amp Circuit Breakers
0
3-way switch and top only hot outlet troubleshooting
1
How should I connect a new outlet with two pairs of wires?
1
Converting electric receptacle with one hot and two neutral wires to GFCI
7
To break or not break tabs when installing an electrical outlet
1
Changing a switched outlet to half-hot and found pigtails